Rod Millen will be there to celebrate (and compete) with his turbo Toyota pickup. 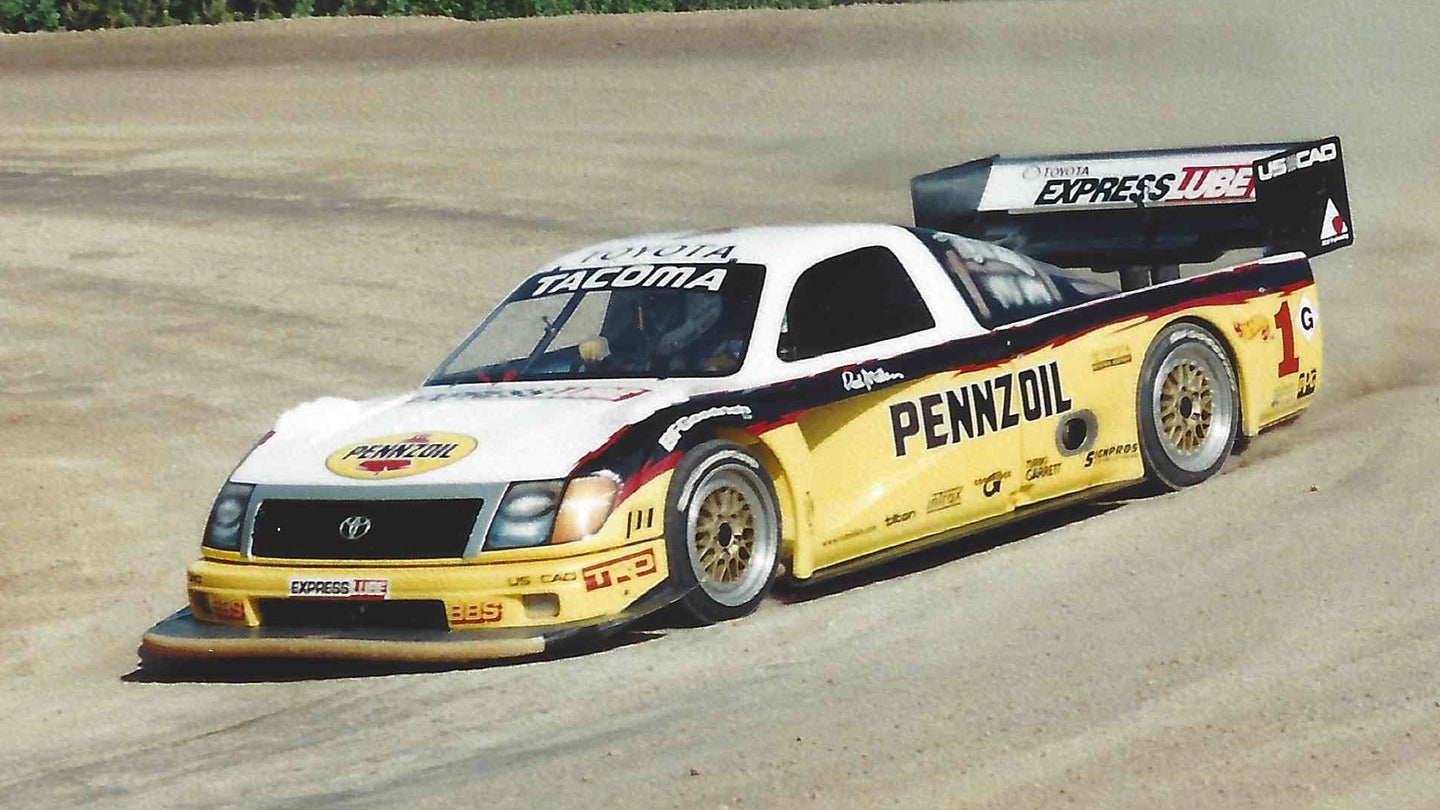 This year marks the hundredth running of the world's most extreme hill climb: Pikes Peak. Returning to celebrate the milestone at age 71 will be five-time race winner Rod Millen, who will bring with him his legendary, two-time overall winning Toyota Tacoma race truck.

Millen, who took all his wins in the 1990s at the wheel of turbo Toyotas, showed up to the 1998 race in this Tacoma silhouette racer, which isn't based on a ladder chassis but a tubular frame with a mid-mounted engine. Like the Celica in which he won three previous races, it was powered by an IMSA-sourced 2.1-liter 503E race engine, which scans of a 1999 magazine indicate produced 750 horsepower at Pikes Peak's racing altitude of more than 9,000 feet.

It was enclosed behind Millen's head by a carbon fiber body complete with giant NACA ducts, a large rear wing, and a duo of underbody venturi tunnels that generated ground effect downforce. Laying power down through a transfer case (making it truly four-wheel drive), the Tacoma could apparently accelerate from 0 to 100 mph in 4.9 seconds, even on dirt, which helped it win the 1998 and 1999 races, and nearly break the 10-minute barrier. Such success made it an icon of hill climb racing, and later earned it an entry at Goodwood, where it set no records but hung its tail out more than once on a memorable trip up the hill.

Millen will be met at Pikes Peak by fellow Kiwi and famed drifter "Mad" Mike Whiddett, who will announce his presence with a cloud of tire smoke and the wail of his four-rotor, 1,200-horsepower rear-drive Mazda3. These two only scratch the surface of strangeness that is the 2022 Pikes Peak entry list, which also includes a tri-turbo diesel Radical prototype, a Prodrive-built ex-WRC Subaru Impreza, a 1994 Ford Bronco, a VW New Beetle, and a Toyota Paseo. And those are only the combustion-powered entries.

Not one but two Nissan Leafs (Leaves?) will be chased up the mountain by an equal number of Tesla Model S Plaids. It seems like every year they run the race, the field only gets more interesting, not to mention faster.

This Four-Rotor, Rear-Drive Mazda3 Could Shriek Up Pikes Peak With 1,200 HP

Improved breakover, approach, and departure angles and a very cool color are highlights of the 2022 model.