The Drive follows a team through its preparations for this year’s Pikes Peak International Hill Climb. 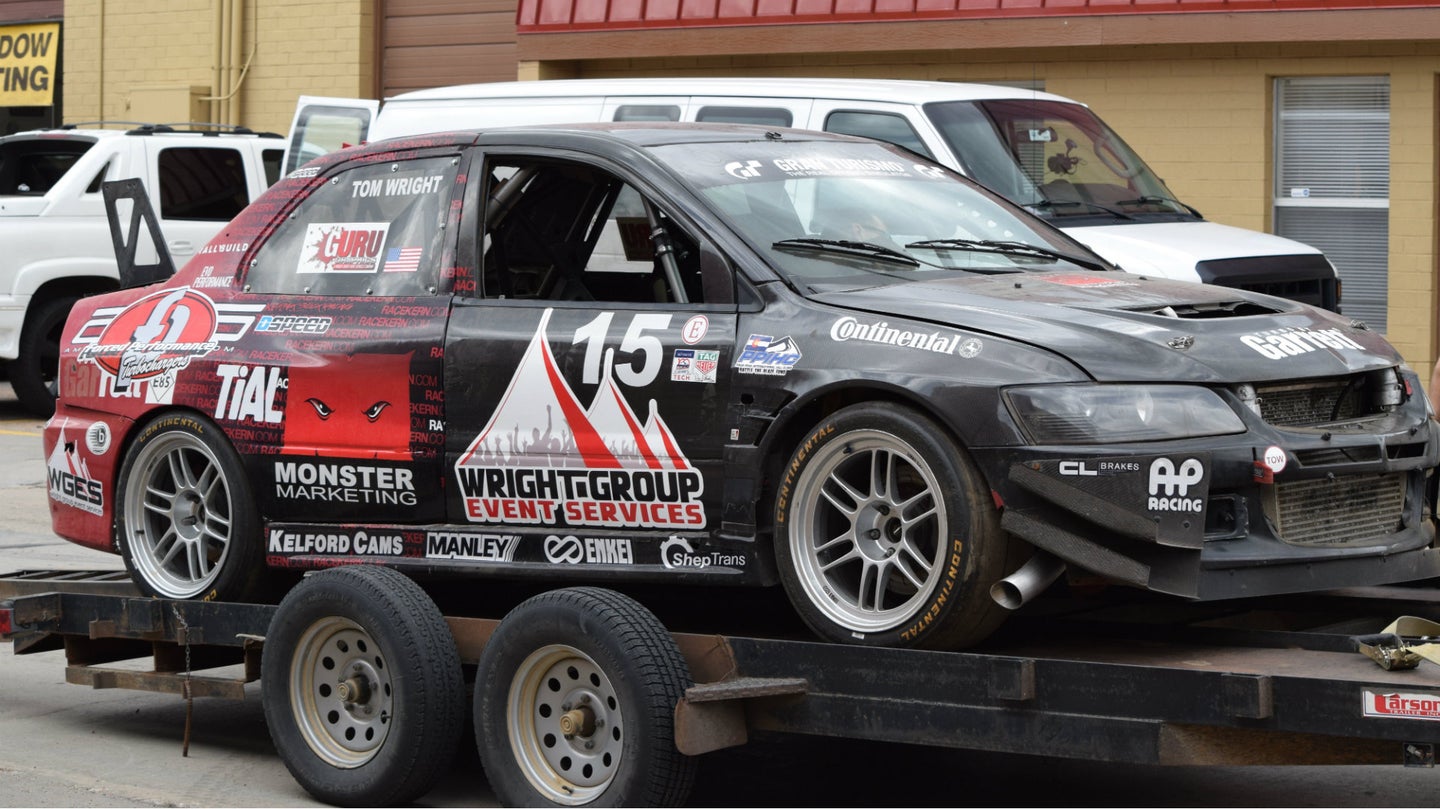 I arrived at an industrial estate in Northglenn, Colorado, housing a shop named D Speed, which does business as a diesel emissions shop on weekdays. If you know the right people, the dynamometer here doubles as a platform upon which one can either tune an engine, or just have a couple runs to have a look at what's under the hood. I was told to show up at ten, but nary a soul is here. I'm starting to wonder if Nick, an MR2 specialist mechanic with whom I do business, might have meant ten at night.

Dustin, the shop's owner, arrived, I introduced myself as the guy with the camera. We would shoot the breeze and get familiar for the next few hours, while the car's wiring—meant to be done the night before—was being finished across town.

At last, a trailer carrying a vinyl and carbon-laden Mitsubishi Lancer Evolution IX pulled up outside, along with the car's pit crew and driver, who came bearing gifts of Taco Bell. A few hours later, the crew discovered problems in the Evo that would prevent it from being fully tuned prior to tech inspection. It'd eventually get fixed, but the juicy footage of the dyno run—the reason I showed up at at 10 am—wasn't going to happen today.

More on that later. In the mean time, I learned what I could about the team, Wright Group racing, and their driver, Tom Wright.

The Drive: What is your motorsport history?

Tom Wright: Did some motorcycle racing when I was younger. Did Bob Bondurant’s school, one week course in Formula cars. That was when I was maybe about 28. I did the bikes when I was, like, 20, in Canada. Got a little bit of racing background with NASCAR, I did the Southwest series. I actually had a team, and a driver, and the guy was doing so bad, and I finally went to my mechanic, and I was like, "get him out of the car, right now please. I need to get in there." So that was the start of my racing career. Off and on, I’d have my driver drive, and then I’d drive. I ran four, or five, six, maybe? So this [Pikes Peak] came up as an opportunity, and I was like, ‘I gotta try this,’ and I just got lucky.

What got you involved with the Pikes Peak Hill Climb?

We (Wright Group Event Services) built the tents and stuff, and I got on the mountain, and I’m like, "shit, I need to do that!"

Do you have any goals for your performance this year?

Hopefully everything runs good, and the turbo stays alive—I blew the turbo last year. I definitely need to get down into the tens, to get into the nines would be awesome. I’m obviously going for a class win… some fast guys, though. They practice a lot more than I do, I haven’t practiced this year, practiced once last year. I’d like to say top three, but I mean, let’s be realistic. It’s doable.

What is the scariest part of the race course?

The second to last turn, at the top, where you have to floor it into the sky… It’s not really the scariest; it’s critical, it’s demanding. You can lose a lot of time in that turn. The other thing is coming into your first corners, when you're just getting the feel for it, so those are more intense, and you’ve got a lot of spectators around.

What have you learned from racing at Pikes Peak all these years?

In part two, I will explore the history, design, and construction of the team's car, and there will be a dyno run or two, complete with everyone's favorite part about high power dyno runs: backfiring exhaust. In the mean time, here's an album of the car.