Stewart’s been spotted at quite a few NHRA events this year. Now we know why. 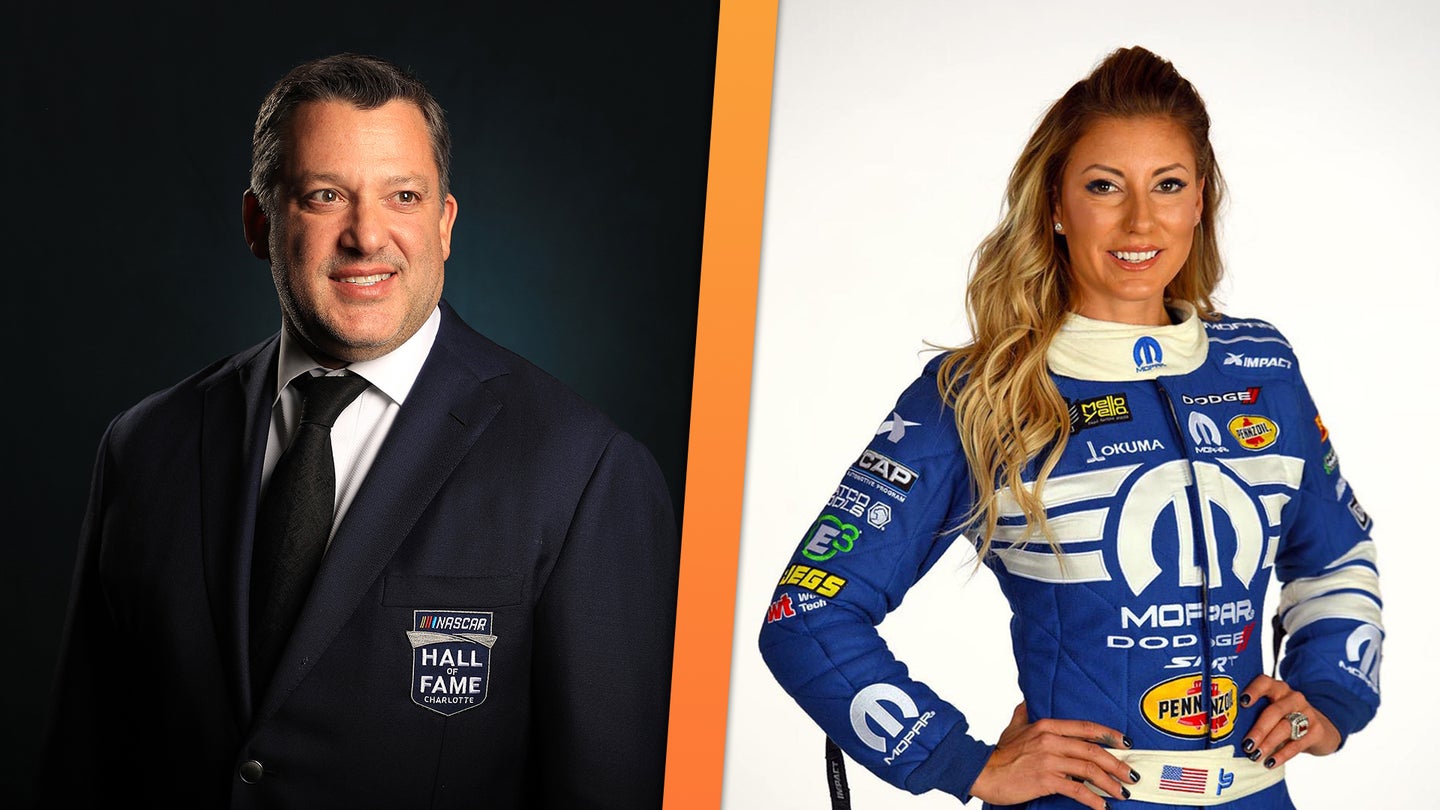 Racer Tony Stewart’s enthusiasm for all sorts of motorsports is no secret, with the three-time Nascar Cup champion also having logged time in IndyCars, USAC midget, sprint cars and Silver Crown cars; the World of Outlaws sprint cars and Ollie’s All Stars sprint cars (he owns the series); sports cars (he almost won the Rolex 24 at Daytona in 2004 and 2005); karts and super late models.

So what explains the sudden interest in NHRA drag racing? That would be Leah Pruett, driver of the Don Schumacher Racing Top Fuel dragster. We can confirm that Stewart, 49, and Pruett, 32, are a couple and have been dating since at least April when Hoonmaster Ken Block posted a video in May saying the pair had been quarantining for weeks and wanted to get out and test their new Can Am Maverick X3s. Left unsaid—they'd isolated together.

At this point, there's no saying whether Stewart and Pruett will end up as another motorsports power marriage like NHRA Funny Car racer Courtney Force and IndyCar racer Graham Rahal, who tied the knot nearly five years ago and are expecting their first child in November. But friends of both Stewart and Pruett are saying this looks like the real deal.

They have a lot in common, ranging from—well, an interest in motorsports, to the fact that both stand 5’9”. They even weigh the same, if you don't count Stewart's 40 bonus pounds (and hey, he's lost weight and looking trimmer than he has in years). Both have a thing for outright speed, though Pruett's career-best mark is 334.15 mph while Stewart's is... slower.

Stewart, part owner of Stewart-Haas Racing, was front and center September 27 on the starting line of the NHRA Gatornationals at Gainesville Raceway in Florida. A week later, he was at the Mopar Midwest Nationals at World Wide Technology Raceway outside St. Louis, where Pruett crashed sensationally. A weekend later he was at the AAA Fall Nationals at Texas Motorplex near Dallas—all periods where members of his Stewart-Haas Racing team are competing for the Nascar Cup championship elsewhere.

Stewart has been engaged, but never married. Pruett was racing as Leah Pritchett while she was married to Gary Pritchett, a tuner for the current Top Fuel championship driver, Steve Torrence. Leah filed for divorce July 31, 2019 and returned to her maiden name of Pruett. The final dissolution, which has been postponed twice, is now scheduled for November 12 at 1 p.m.

Pruett raced to the Gatornationals semifinals, where she was beat by eventual winner Torrence, with her top speed of 310 mph eclipsed by Torrence’s 324 mph. “We wore through the clutch and the motor dropped a few holes in the top end against Steve Torrence in the semis,” she said. For NHRA newcomers (like Stewart), “dropping a few holes” means several of her pistons stopped contributing to the cause. She went out in the first round in her Factory Stock Showdown Dodge Challenger.

At St. Louis, she lost in spectacular fashion to Tony Schumacher in Round 2, when her dragster bowed up and broke in half as she neared the finish line, but she was uninjured.

Meanwhile, Stewart-Haas Racing’s Kevin Harvick is ranked first in the Nascar Cup Chase for the Championship, the only Stewart-Haas driver in the final eight. Harvick needs a win at Martinsville Sunday to guarantee a slot in the final four, but he likely has the points he need to make it. Thanks to the miracle of having access to private jets, Stewart is on hand at Nascar races as much as his love life allows.

Stewart, the sprint car driver, last competed with the World of Outlaws at Port Royal Speedway October 10, where he started 23rd and finished 20th. Sounds like multiple holes may have been dropped there in Pennsylvania.