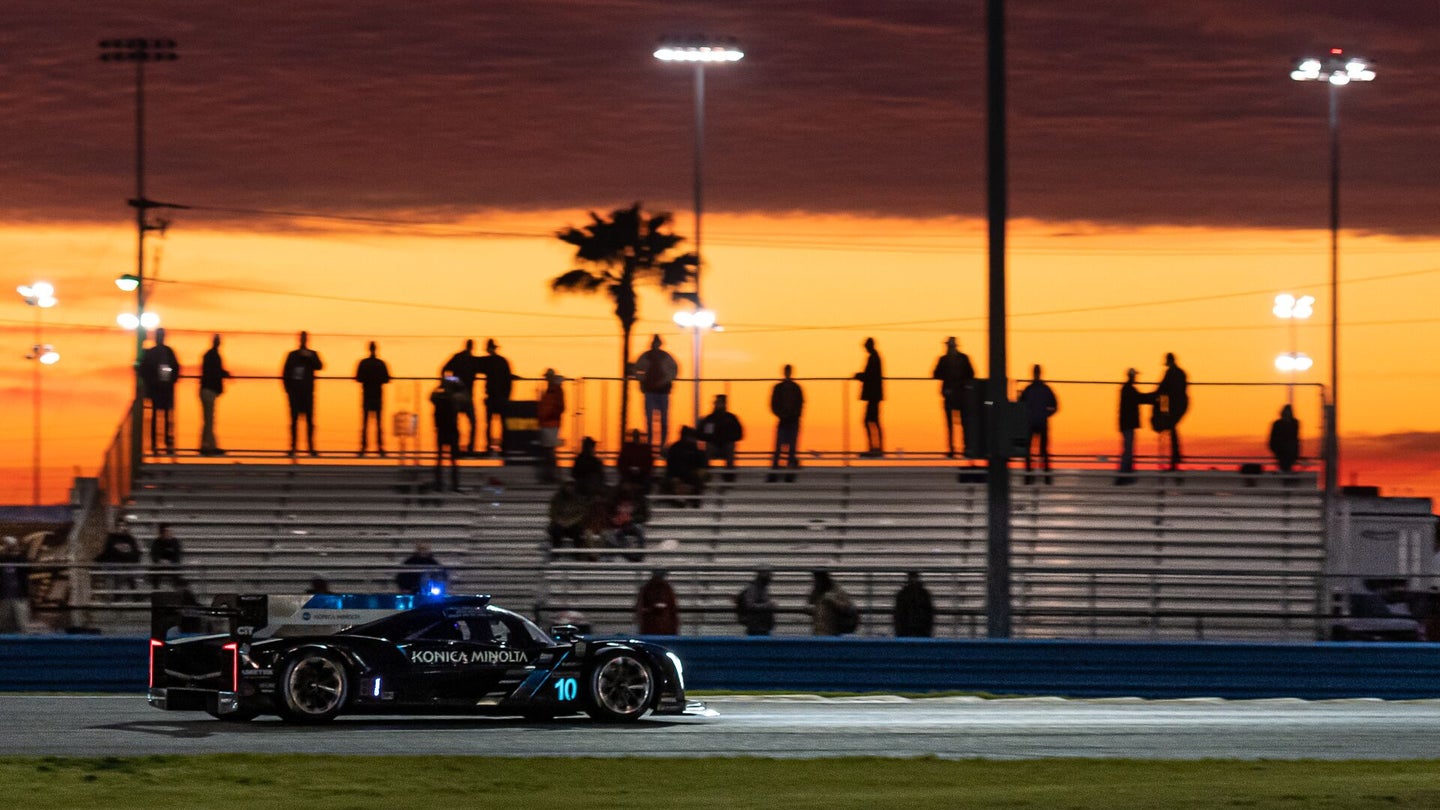 This weekend's twice-around-the-clock classic in Daytona ended with Wayne Taylor Racing atop the podium once again, earning its second consecutive Rolex 24 victory and its third in four years.

A combination of perfect weather and low traffic allowed for an all-time race record for laps run, besting the old benchmark of 808 laps with 833 in total. Distance-wise, the figure equaled 2,965.48 miles. Collectively, just six full-course cautions were issued during the race, totaling a time of one hour and 45 minutes. Compare that to last year's edition of the Rolex, which was red-flagged twice and eventually called off before completing a full 24 hours of racing.

There was a record-setting green-flag period as well, as the race ran caution-free for seven hours in the middle of the night—no easy task around the challenging 3.56-mile roval.

The driver lineup of Kamui Kobayashi, Renger Van Der Zande, Scott Dixon, and Ryan Briscoe pieced together a relatively trouble-free run in the No. 10 Cadillac DPi V.R, save for a power steering issue early on and a penalty in the second half of the race. That said, they were pushed throughout the contest by the pole-sitting No. 77 Mazda RT24-P DPi, which redeemed itself from a string of heartbreaks at Daytona with a second-place overall finish. Still yet, WTR had a minute gap to P2 when the checkered flag flew.

Rounding out the podium in third was the No. 5 JDC Miller Mustang Sampling Cadillac. This extremely positive result was rewarding for the newly formed partnership, although with a team of overall winners driving the DPi, anything short of a win can't taste quite as sweet.

Notably absent from the rostrum was Acura Team Penske, who entered the Rolex with confidence and a shot at overall victory. Coming high off its IMSA championship from last season, the No. 6 Acura ARX-05 DPi faced issues in the second half that would hamper its ambitious attempt. Its No. 7 sister car was struck by the No. 55 Mazda early on, which put it far behind for the rest of the event.

The No. 81 Dragonspeed Oreca won by more than a little as the team of Ben Hanley, Henrik Hedman, Colin Braun and Harrison Newey captured the team's second consecutive Rolex 24 victory. A tire puncture was the only issue worth speaking of for the American outfit, which would finish two laps ahead of PR1's No. 52 Oreca.

Era Motorsports managed a podium, albeit 11 laps off the leader.

With all eyes on the mid-engined Chevrolet Corvette C8.R, which made its race debut this week, BMW Team RLL quickly compiled a lead of its own in the factory-filled GT Le Mans category. The No. 24 BMW M8 GTE crew of Jesse Krohn, Chaz Mostert, John Edwards, and Augusto Farfus was threatened by the pair of Porsche 911 RSRs in the race's final hour, but the result was, at last, a repeat of last year.

Krohn was racing in second prior to the last round of pit stops, but an act of late-race heroics put him in first where he'd stay until the end. He'd cross the finish line 13.5 seconds ahead of the No. 912 Porsche, with the latter's No. 911 teammate coming in third. Not a terrible result for the new generation 911 RSR's debut.

Perennially one of the hardest-fought classes in IMSA, GT Daytona did not disappoint in the Rolex's 58th running. It was a battle of Lamborghini vs. Lamborghini as Paul Miller Racing's No. 48 Huracan took on the No. 44 Magnus Racing entry, at last becoming victorious to score its second Daytona win in three years.

Magnus Racing led as late as the 23rd hour, although PMR overcame its competition to finish 24 seconds clear of the field.

The No. 88 WRT Audi completed the podium after a full day of avoiding trouble in the pro-am category.