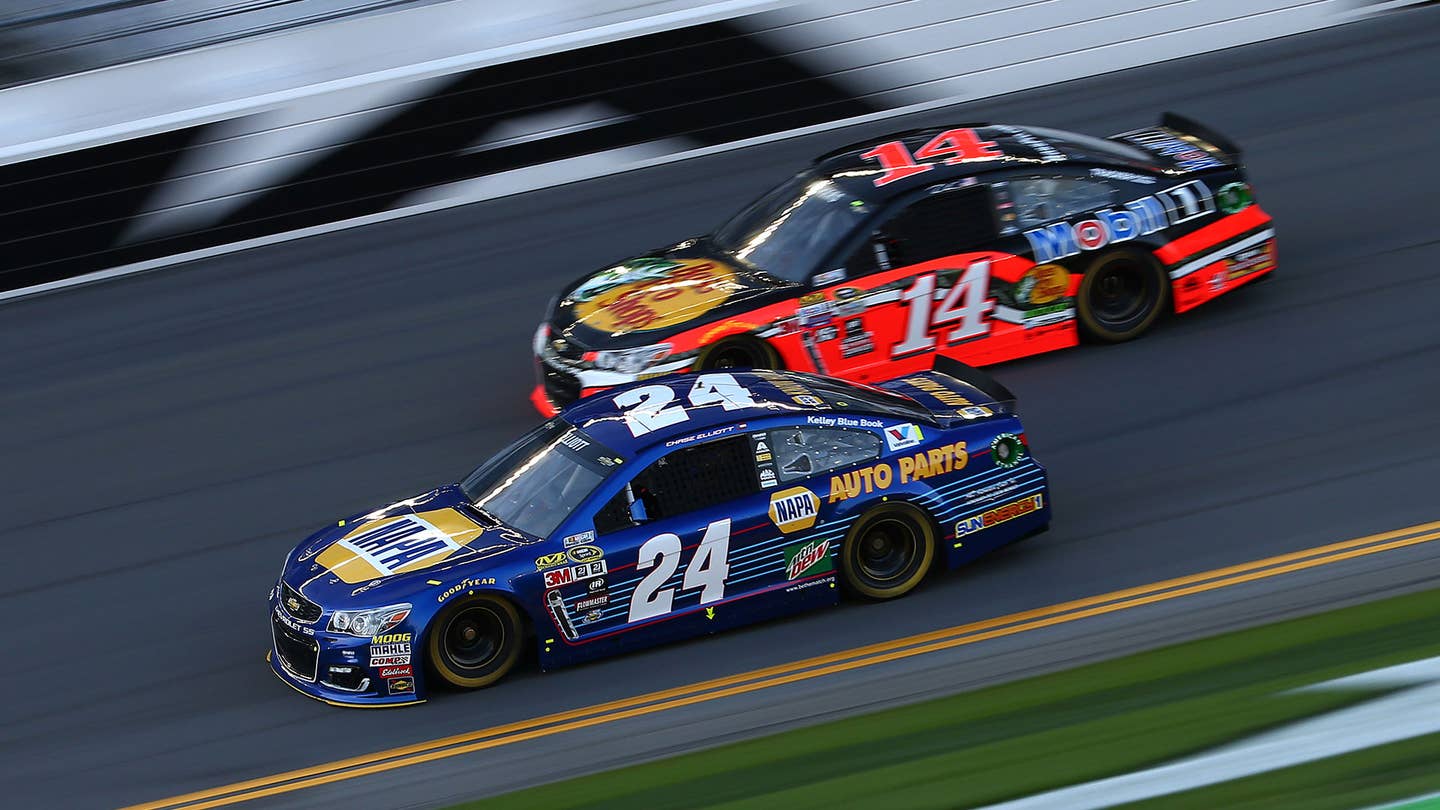 Who expected NASCAR Sprint Cup rookie and racing scion Chase Elliott to take the pole at this year's running of the Daytona 500? Driving the Hendrick Motorsports No. 24, a seat recently vacated by Jeff Gordon, who retired last year, Elliott posted a remarkable pole-winning time.

Come on, you say. He’s driving the best car, run by the most powerful team in the sport. His daddy is a former NASCAR champion who holds the record for fastest speed at Daytona.

The good old boys at NASCAR love a pleasing narrative. Who can blame them? They’ve been in a dance with declining ratings since a national peak around 2004. At the Daytona 500, where the France family recently sank $400 million in renovations—which included Wifi, JumboTrons and a multicolor seat paint scheme to make empty grandstands look full on TV—attendance had been in a steady decline until 2012, when NASCAR stopped releasing figures. They also removed 45,000 seats.

So what’s going on in NASCAR? The shine has started to wear off legacy superstar Dale Earnhardt, Jr.; high-wattage personalities like Tony Stewart and Kevin Harvick are reaching their twilight years, and there are no obvious replacements waiting in the wings. The crowds are wandering off as well. The Great Recession of the Bush years took its toll on the stock car demographic, which travels far for races and endures expensive tickets and price-gouging for accommodations and food.

But the Daytona 500 is still NASCAR’s biggest show, a Super Bowl that kicks off the racing season. So there are storylines leading up to Speed Week and the Saturday Qualifying. This year, that story is the rookies, the next generation: Chase Elliott, Ryan Blaney, Chris Buescher, Brian Scott. Last year, it was Jeff Gordon’s final run at Daytona; the year before that, Richard Childress’s grandson Austin Dillon was driving a No. 3 car for the first time since Dale Earnhardt, Sr. died. Before that Danica Patrick was starting her first full season.

And guess who won the pole each of those years? Chase Elliott, Jeff Gordon, Austin Dillon, Danica Patrick. Do you believe in coincidences?

Along pit row, there’s always been talk of getting “the tap” on the shoulder—especially in restrictor plate races, high-speed tracks where NASCAR officials fit induction-choking blocks beneath the V8’s throttle body. These plates are drilled with four holes. The larger the holes, the the more air passes through; the faster the engine revs, the faster the likely velocity. When Chase Elliott’s father set the Daytona race speed record of 210.364 mph in 1987, it was the last year before restrictor plates were affixed to carburetors. His son, Chase, won the pole this year going 196.314 with a restricted fuel-injected motor.

If NASCAR officials were to engage in a conspiracy to handpick the pole sitter in a race, they’d do it at Daytona or Talladega, the two restrictor plate tracks in the 36-race schedule. Why? Because those are the sport’s two most popular events. Also: It’s the only opportunity they’d have to directly affect the speed of a single car.

According to a source at NASCAR, who asked to remain anonymous, “For qualifying and the race events, NASCAR provides the restrictor plates.” The team provides engine specs and undergoes testing onsite. However, the plate itself is all NASCAR.

Realize that Daytona is, essentially, a toss-up. By engine dynamics and adjustments during Speed Week, the top 15 or so drivers are put in serious contention. Like a basketball game, a restrictor plate race doesn’t get serious until the last few laps. In fact, many drivers prefer to reel off the laps from the back, staying out of the mix and trying to avoid the “Big One”—a wreck that can take out a dozen cars in a matter of seconds.

At Daytona, many a fast ride’s day is ended—and many a champion’s dethroned—by the fickle meeting of fate and physics. (Just ask Dale Earnhardt, Jr., who binned it down the frontstretch this year while running in 5th place with 30 laps remaining.) But qualifying is another story. Cars finish hundredths of a second apart, seconds split and split again. Elliott finished nearly a full tenth in front of Matt Kenseth, an eternity at this level of racing. Want to gain an edge?

Simply use a plate with slightly larger holes.

During qualifying this year, a somewhat cool, sunny day in Volusia County, Fox commentator and former Daytona 500 winner Darrell Waltrip was astonished by Elliott’s time. Jeff Gordon, whiling away his retirement in the broadcast booth, looked at how much speed Elliott found between qualifying rounds and exclaimed: “That was a huge pickup! We didn’t think anyone was going to get a pickup like that.”

Is there proof that the pole is rigged? No. But the circumstantial evidence continues to pile up. Tony Stewart once hosted a talk show on Sirius Satellite Radio, and, during a tirade about NASCAR meddling with results by throwing bogus debris caution flags, said: “They can almost dictate the race instead of the drivers doing it. It’s happened too many times this year. I guess NASCAR thinks, ‘Hey, wrestling worked, and it was for the most part staged, so I guess it's going to work in racing, too. I don’t think they’ve run a fair race all year long.”

And Honda takes its first ever Daytona victory, too.