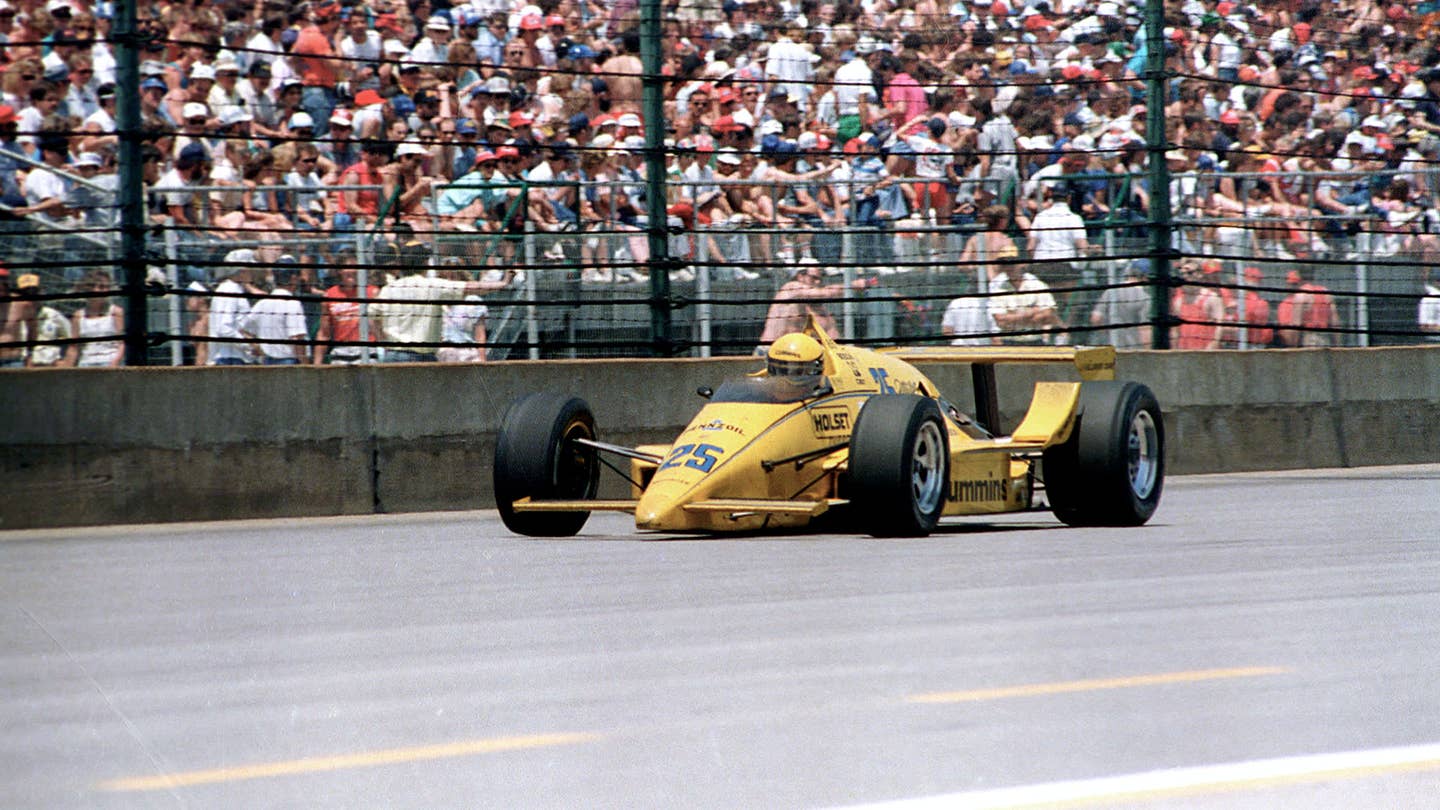 At the beginning of May, 1987, in a hotel lobby in Reading, Pennsylvania, a year old retired Indy car sat on display, eye candy for hotel guests—far from the Brickyard in Indianapolis. Meanwhile, Al Unser Sr.—three-time Indy 500 champ—was looking for a ride. For the first time since 1969, Unser entered May with no car to qualify. He was about to turn 48 years old. “It’s strange to be here like this,” he said. And by that he meant hanging around Gasoline Alley as a spectator. “I’m not sure what my status is for next weekend [qualifying] or the race. The way things are going, it doesn’t look good.” It appeared that Unser’s heralded career was over—one Indy 500 victory shy of the record four wins.

Practice and qualifying in 1987 saw what what the L.A. Times called “an epidemic of accidents.” Dennis Firestone suffered neck fractures and a severe concussion. Jim Crawford and Johnny Parsons both broke bones in their legs. Pancho Carter flipped his car at speed and hurtled upside down seemingly forever; incredibly, he suffered almost no injuries.

Danny Ongais also wrecked, and track medics ruled him unfit to drive in the race due to a concussion. And here is where things got interesting. With Ongais out, Roger Penske needed to fill out his three-car entry. He brought in Al Unser Sr., and for a car, he had shipped in last year’s machine—the Cosworth-powered March that had been sitting on display in that Pennsylvania hotel lobby.

Three days later, Unser set out to qualify. By all acounts, he had no chance. “There’s so much pressure,” he said, “so much drama and enthusiasm. You walk out onto the race track and you can just feel the adrenaline.” Unser surprised everyone with a crackling speed of 207.423 mph his first day in the car, but it was nowhere near Mario Andretti’s pace. Andretti snatched the Indy pole—his third, at 215.390 mph.

For most of the 1987 race, it appeared that no one would catch Mario. He led 170 of the first 177 laps—at one point, for 80 laps in a row. Tragedy struck along the way. A spectator was killed when an errant wheel went hurling over the catch fence and into the crowd. Cops had their work cut out for them too, arresting over 100 fans for public intoxication. Late in the afternoon, with 23 laps to go, the Andretti Curse did Mario in once again; his car failed, leaving the race wide open. Roberto Guerrero took over first, with Al Unser Sr. behind him. It looked to be Guerrero’s race to lose, but Unser was pushing hard. In the press booth, Jim Lampley had this to say: “[If] Al Unser Sr. wins this race, you can make a strong case for him as the greatest Indianapolis 500 driver of all time.” Pick up the action in the final laps here: