Five racing cars that probed the limits of legality and were effectively banned from competition. 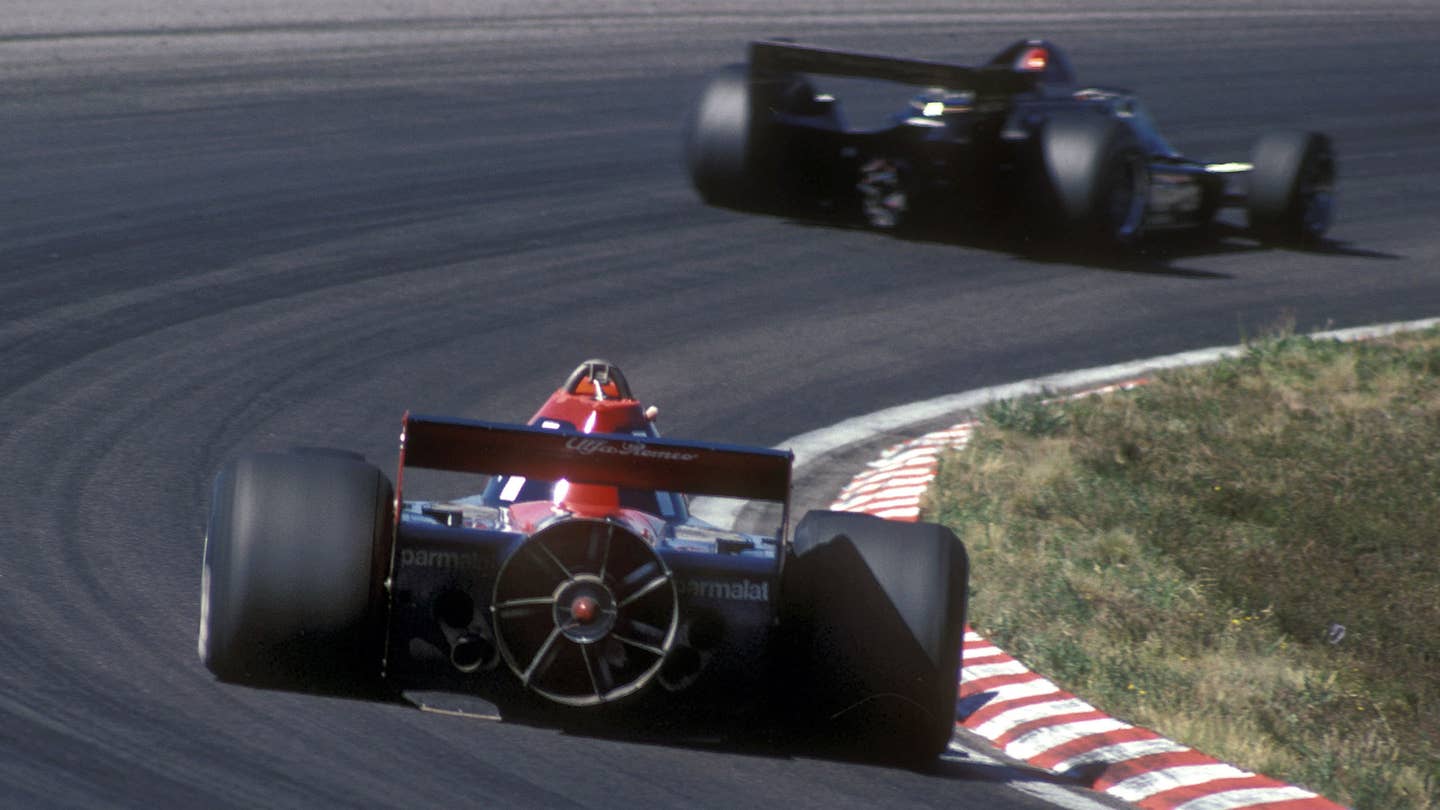 We like to think of our racing heroes as supernaturally talented. Remember Nigel Mansell passing Gerhard Berger on the outside of the wicked-fast Peraltada corner during the last lap of the 1990 Mexican Grand Prix? It was a ballsy move, as ol’ Nige had to take his twitchy Ferrari out into the rubbery klag to make that magnificent pass.

While this type of mano a mano on-track action draws us to the sport, most racing takes place away from the track, where brainpower, not horsepower, interprets the rules and develops what Mark Donohue called the “Unfair Advantage.” If something is not expressly forbidden, it’s game. Indeed, creative interpretation of the rules has been around ever since racing began, and here we present five fascinating race cars that probed the limits of legality, only to be banned or legislated out of contention.

You’d think Smokey Yunick, the legendary mechanic/builder/crew chief who ran “The Best Damn Garage in Town” in Daytona Beach, Florida, would be in the NASCAR Hall of Fame by now. Not yet. This legendary figure, a two-time Mechanic of the Year who died in 2001, was too much of a thorn in NASCAR’s side, thanks largely to his clever interpretations of the series’ rulebook.

And nowhere was this more apparent than with his 1966 Chevrolet Chevelle, which Curtis Turner put on the pole for the 1967 Daytona 500 but retired from the race with engine problems then crashed at Atlanta. The No. 13 car looked much like a stock Chevelle but had significant aerodynamic modifications that helped it compete with the dominant Fords and Chryslers of the era. The roof and side windows were lowered slightly, and the bumpers were more closely fitted to the body, which had been moved two inches rearward on the chassis for better balance. Although many people insist this Chevelle was built on a 7:8 scale, that theory has been debunked, even by Yunick himself. What this Chevelle does have are special floorpans that allowed the exhaust to ride up a bit into the chassis (and out of the airflow) for reduced drag.

When Yunick returned to Daytona in 1968 with another Chevelle, NASCAR tech inspectors presented him with a laundry list of fixes that needed to be made before the car could race. Frustrated, the temperamental Yunick fired up the Chevelle and stormed away, driving the car all the way back to his Daytona shop—even though the fuel tank had been removed by NASCAR to check its volume.

How’s that possible? Turns out Smokey’s Chevelle had a coiled 11-foot-long fuel line that was good for an extra two gallons of fuel…

“I’d been reading the [NASCAR] rule book to see what it said,” wrote Yunick in a 1987 Circle Track article. “And all along what I should have been doing was finding out what it didn’t say. After I started doing that, racing became fun in a big way.”

Traditionally, the Indy 500 was a bastion for experimentation, with rules that fostered ingenuity and allowed wild mechanical variety. In 1967, that took the form of the STP Paxton Turbocar, an all-wheel-drive open-wheeler (designed by Ken Wallis and Andy Granatelli) powered by a Pratt & Whitney ST6B-262 gas turbine helicopter engine that was mounted longitudinally amidships to the driver’s left.

With Parnelli Jones at the wheel of this bulbous creation, the aluminum-chassis STP Paxton Turbocar proved fast. He qualified sixth at 166.075 mph, and then quickly assumed the race lead. However, with only four laps left, Jones coasted into the pits—a bearing in the single-speed transmission had failed, handing the win to A.J. Foyt.

A gauntlet had been thrown down. Even though this Paxton Turbocar with the trick airfoil-shaped A-arms was a few hundred pounds above Indy’s minimum weight limit, it proved it could win the May Classic. For 1968, however, USAC reduced the car’s air intake considerably, which dropped lap speeds at Indy to about 161 mph. Making matters worse, when Joe Leonard attempted to qualify the STP Paxton Turbocar at Indy that year, he crashed and the car never raced again.

Turbines, though, continued at the Speedway. Three wedge-shaped Lotus 56s raced at Indy in 1968, powered by the same Pratt & Whitney turbine and driven by Leonard, Graham Hill and Art Pollard. Leonard placed the Lotus 56 on the pole and led 31 laps, but a fuel shaft broke while he was leading late in the race. For the second year, a turbine had led the Indy 500, only to break late in the race. USAC, sensing a sea change it didn’t particularly like, quickly banned turbines and all-wheel drive, relegating these cars to museum pieces.

Jim Hall’s Texas-built Chaparrals were aerodynamically advanced, and the 1970 2J, commonly called the “sucker car,” has to be the most innovative. In back, this V8-powered Can-Am car had a box-shaped body that served as a large vacuum plenum. A two-stroke snowmobile engine, running at a constant 5500 rpm, drove two rear-mounted fans that sucked air out of the plenum, aided by articulated Lexan skirts that helped provide a seal against the racing surface.

The result? The 2J was sucked to the track like no other car. This, for the record, was well before ground-effects tunnels and sliding skirts in Formula 1, and Jim Hall said it took time for the driver to get used to driving the 2J because, unlike with wings, downforce was not related to vehicle speed, which meant the 2J was unnaturally quick in low- to mid-speed corners.

Hall says the 2J wasn’t fully ready for the 1970 Can-Am season, which is why it competed in only four races. But get this: At the Riverside season finale, driver Vic Elford put the 2J on the pole by more than two seconds over Denis Hulme in the McLaren M8D–Chevrolet. In the race, though, on lap 5, the fan motor stopped running right as Elford was in Riverside’s super fast Turn 9. When the 2J’s body lifted, Elford somehow managed to avoid catastrophe but had to park the car.

Not long after, the Sports Car Club of America, sanctioning body of the Can-Am series, under pressure from the dominant McLaren team, banned the 2J from further competition, stating that its sucker fans were “movable aerodynamic devices” that were deemed illegal by the FIA. The 2J never won a race, but it clearly inspired some great thinkers, including one Gordon Murray at the Brabham Formula 1 team.

Murray knew that the BT46’s low and wide Alfa-Romeo flat-12 engine wouldn’t allow the team to run the full-length underbody venturi tunnels being used so effectively to create downforce in the dominant Lotus 79 F1 cars of Mario Andretti and Ronnie Peterson.

What to do? Borrow a page from the Chaparral 2J and employ a sucker fan. This one, though, was a large single fan on the rear of the aluminum-tub machine and driven by the engine through a series of clutches. When the car was in the pits, the fan was covered by what looked like a trash can lid. Andretti likened the BT46B to a giant vacuum cleaner that spit debris at him, a charge that Murray said was impossible because the exit velocity of the air was only 55 mph. One thing is certain with the Murray-designed fan: Greater engine rpm meant greater downforce, and sliding skirts helped provide a good seal with the asphalt.

But didn’t this fan represent a “movable aerodynamic device,” as expressly forbidden by the FIA? While that would be consistent with the earlier 2J (and 2E) ruling, Brabham, owned by Bernie Ecclestone, successfully argued that the fan was legal because its primary purpose was for engine cooling.

The FIA agreed, and in the 1978 Swedish Grand Prix, Niki Lauda won with ease after sandbagging his way to a 3rd qualifying spot. Lauda, in fact, gapped the field by 35 seconds, and the Austrian later said that the BT46B, unlike other cars in the race, was unaffected by the oil dropped on the track by the expiring car of a backmarker.

Although many believe the FIA banned the Brabham BT46B Fan Car after this race, officials ruled the car legal for the rest of the 1978 season. Ecclestone, however, voluntarily retired the car after its one and only race. He became chief executive of FOCA (the Formula 1 Constructor’s Association) that year, and he needed the support of other privately owned teams.

Does that make the Brabham BT46B Fan Car the only undefeated F1 car in history?

While it was well known in the early 1990s that pushrod engines such as the Buick V6 with two valves per cylinder were allowed 10 more column inches of turbocharger boost (5 psi) at Indianapolis than the purpose-built four-cam four valvers from the likes of Cosworth and Ilmor, many folks hadn’t realized that USAC in 1991 had dropped the requirement that these powerplants be based on a stock block.

But Roger Penske did. And in what became one of the greatest-kept secrets in motor racing, Penske had UK-based Ilmor design and build a pushrod V8 with but one purpose: winning the Indy 500. What’s more, Penske managed to get Mercedes-Benz to put its name on that big intake plenum.

Developed after hours in total secrecy in less than a year, the pushrod Mercedes-Benz engine, dubbed the 500I, was designed to fit right into the team’s existing Penske PC23 chassis. Power for this comparatively low-revving 3.4-liter powerplant was in the neighborhood of 1000 bhp, which meant it had a 150- to 200-horse advantage over the 2.65-liter four-cam V8s. Although Ilmor and Penske struggled to develop a valvetrain and pistons that would last a full 500 miles, the PC23-Mercedes made it to Indiana in time for the 1994 Indy 500, where it would be raced by Emerson Fittipaldi, Al Unser Jr. and a young Paul Tracy.

During that month of May, some folks accused Marlboro Team Penske of sandbagging, but the pushrod PC23Bs—which topped out at over 240 mph on the straights—turned out to be a handful in the corners, a point proven when Tracy clouted the wall hard on Friday before the race. Fittipaldi, for his part, kept things light: “I had never been 245 mph in my life,” joked Emmo. “I don’t want to know how many kilometers an hour that is. I think I’ll keep it in miles!”

Although Unser put the PC23B-Mercedes on the pole with a four-lap average of 228.011 mph, Fittipaldi, running a lower downforce setting than his teammate in the race, led for 150 laps before hitting the wall in Turn 4 as he tried to catch Little Al and put him a lap down with only 16 laps remaining. This basically handed the win to Junior, the clear fan favorite that day.