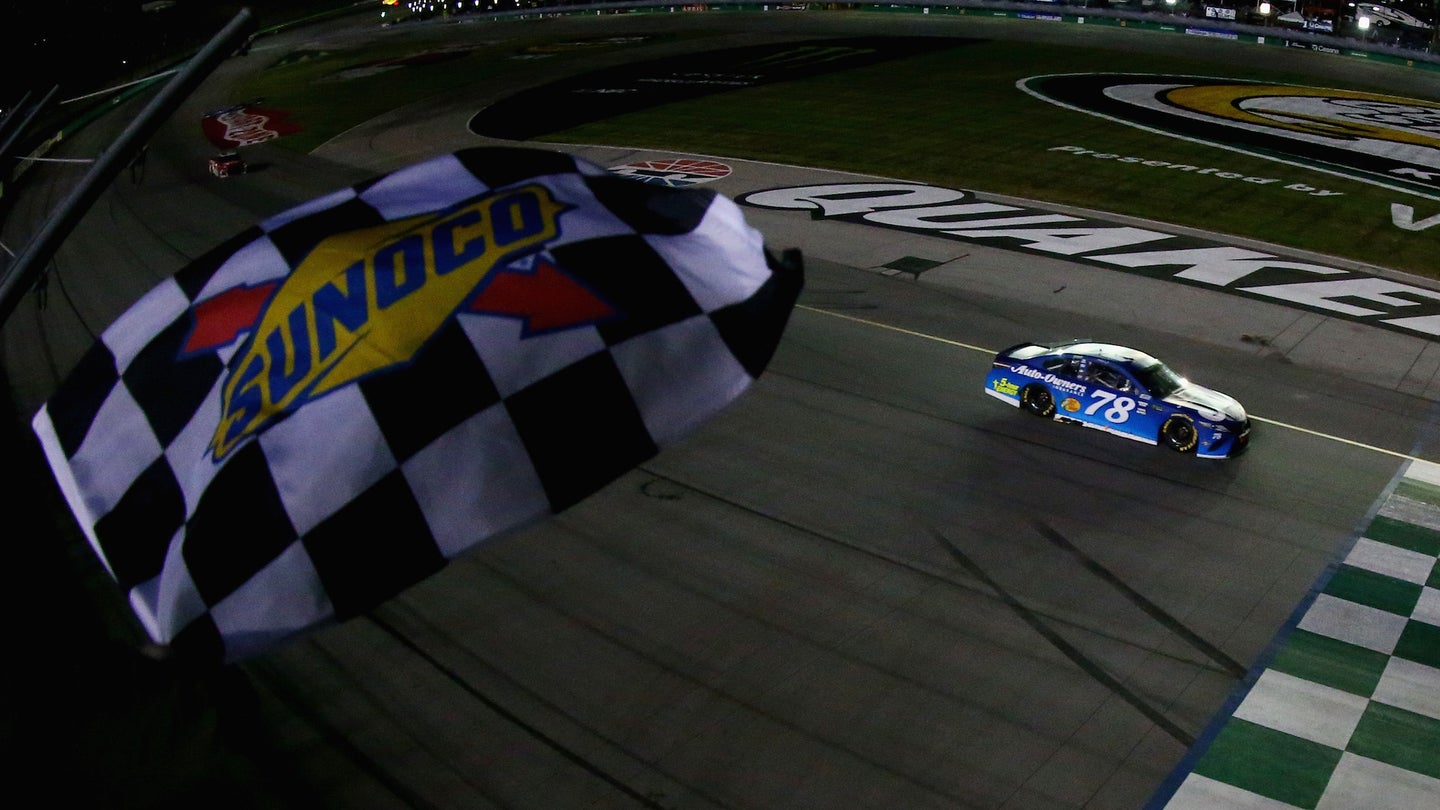 Martin Truex Jr. started up front in the 2018 Quaker State 400 at Kentucky Speedway in Sparta on Saturday night. After a dominant performance that included 174 laps-led, he was also up front at the checkered flag to take his fourth win of the season to pull within a race of Monster Energy NASCAR Cup Series leaders Kyle Busch and Kevin Harvick with five wins apiece, 19 races into the 36-race season. Saturday’s win also was Truex’s second-straight at Kentucky Speedway.

"What a hell of a night this was," Truex said. "That's what we try to do every single week. We've really been working hard on these race cars week in and week out."

Brad Keselowski got out of the pits ahead of Truex with a two-tire stop during a caution at the end of the second 80-lap stage of the race to take the lead. He was able to hold off Truex for awhile, running up front until Truex retook the position on lap 200.

“It was a good call from my crew chief, Paul Wolfe,” Keselowski said. ”We had better speed than we’ve had at the mile-and-a-halves, but not enough to run with the 78 [Truex]. He eventually got by us there and I thought we might have had a shot at it if we could have restarted fourth there [after the final caution of the race], but we kind of cycled back to sixth, and it wasn’t enough to be able to make something happen. All in all, a decent day."

Kurt Busch then took the lead from Truex with a two-tire stop during the fourth and final caution of the race for J.J. Yeley’s blown engine on lap 205. On lap 223, Truex took his final lead of the race.

When Truex passed Keselowski for his final lead, Ryan Blaney also passed his Team Penske teammate for second. Blaney was able to maintain second for the remainder of the race, but Truex pulled away with the lead and the win. Keselowski finished third.

“It’s not a win. It’s a positive, that’s for sure. I hate it,” Blaney said. “I thought we were in a good spot restarting fourth, and Martin struggled a little bit the first couple laps, and I thought I could get by him, but just couldn’t quite get a run on him. His car came in, and mine kind of faded a little bit, and he won the race."

Kyle Busch and Kevin Harvick rounded out the top-five.

Truex claimed two stage wins in the first 160 laps of the 267-lap race, running up front at both laps 80 and 160. He led 51 laps of the first stage, with the only stretch not led by Truex coming during a lengthy cycle of green-flag stops that began before lap 40 and didn’t conclude until under 20 laps remaining in the stage.

Kurt Busch was among the drivers who stayed out longer than Truex during the cycle of stops in the first stage of the race, being credited with 21 laps led during the opening stage. Then, with fewer laps on his tires, he took only two new tires during the caution between the first two stages. As a result, he got out of the pits ahead of Truex and led the opening laps of stage two. Truex, though, was back up front by lap 100.

A caution that came as a result of Alex Bowman hitting the wall on lap 110 due to a flat right-front tire eliminated the need for a green-flag cycle of stops in the second stage. During the caution, Truex got out of the pits first to maintain his lead, leaving Kyle Busch, Blaney, and Harvick to battle for second.

Kyle Larson raced toward the front, running as high as second after starting in the back because he missed driver introductions, but he battled an issue with his track bar throughout the final stage of the race. He finished ninth, the best finish for a Chevrolet.

“It’s hard to say if I would have had anything to win,” Larson said. ”I drove by the No. 78 [Truex], and then, right after that, we had our track bar issue and went plowing tight. Then, we had to crutch it with the wedge, there, the last run, and it drove okay.”

The cautions for Bowman’s tire and Yeley’s engine were the only two cautions for on-track incidents, with the yellow flag waving only two other times to divide the race into its three stages.

“Unfortunately, we blew a tire,” Bowman said. "Kind of looked like it might have broken a brake rotor before that, but it’s hard to say because you break the brake rotor when you hit the wall anyway, so part of it. We will move on and evaluate what happened. Pretty early to blow a tire, so my Axalta, Hendrick Motorsports guys will work hard and we will be better next week.”

Bowman’s early exit resulted in a 39th and last-place finish.

UP NEXT: The Cup Series returns to Sunday afternoon racing with a July 22 date with New Hampshire Motor Speedway in Loudon. Joe Gibbs Racing was victorious both times the series visited the track last year. Denny Hamlin is the defending winner of the July race there, but Kyle Busch won in the last visit to NHMS in September 2017. The upcoming race will be the only contest of 2018 held there for the Cup Series.