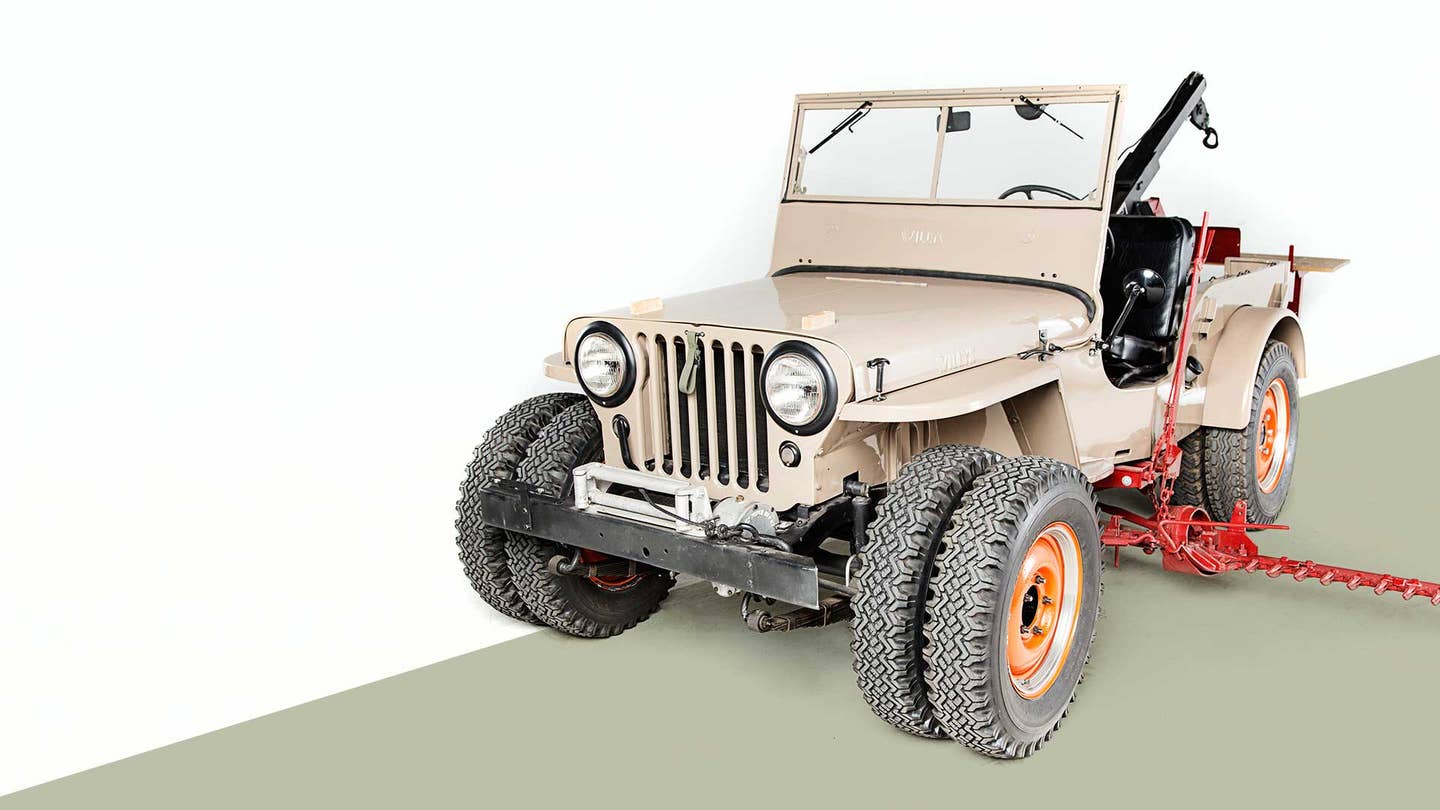 Jeep is a brotherhood: a top-down, doors-off, rolling biopic of masculinity. Owners wave to one another and employ phrases like “capable” and “Trail Rated” liberally. Come winter, during weekend shopping trips, they deliberately climb parking-lot snowbanks.

For Jeep fans, the temptation for vehicle modification is enormous, and ubiquitous. In spring, an overlanding haj to Moab makes a convenient excuse to show off your latest mods.

So where does this zeal come from? Jeeps have been around since World War II, but their civilian uses began with a fistful of rare-formed rigs. And they’re coming together next week in Las Vegas, in conjunction with the Specialty Equipment Market Association show (SEMA). Owned by Omix-Ada, an aftermarket parts manufacturer, these working Jeeps are as iconic as the seven-slot grille itself. Here are some of the collection’s highlights.

Jeeps can already be likened to the automotive equivalent of a multi-tool, but how many tools are too many tools? This CJ-2A makes a solid pitch: a GE welder in lieu of a passenger’s seat, a buzz saw, work bench, wrecker boom, a power winch, mower bar and an air compressor are all aboard. Fear not about lugging this equipment to the job site, for this Willys is eight wheels of overkill, and it’s lovely.

Converted to a fire engine by an Indiana manufacturer named Boyer, these fire trucks were used to battle fires that were too remote for larger engines to access. However, it probably took crews a while to arrive. This Willys’ "Go Devil" engine generated all of 63 horsepower, being harnessed through a three-speed manual gearbox. Snail pace aside, these axe- and ladder-clad Jeeps quickly gained an international reputation. Willys-Overland sold 20 of them to the Brazilian military.

The 1955 Willys pickup was a no-nonsense truck with simple suspension and a rigid stature. Each of its four engine names was aggressively termed in that Fifties good-'ol-boy way: Hurricane, Super Hurricane, Go Devil, Tornado. Over 200,000 were produced in all. This satin-sheened Tin Man was originally owned—and worked hard—by a company near Yosemite National Park, but has been preserved to near mint condition.

This sub-nosed engine-that-could is the American equivalent of the Volkswagen Type 2 Pickup. In the Fifties and Sixties, the “Forward Control” Jeeps featured a hydraulic bed and a puppy-dog fascia that won over municipalities, civilians and even the military. When Willys wrapped up production in 1964, roughly 30,000 had been made. Jeep fans have been lusting for an encore since the brand teased a concept version in 2012.

There are few things more American than a showroom-condition Jeep pickup with a Levi’s denim interior. With only 2,440 miles on the odometer, this sexy J-10 came replete with a brush guard, light bar and factory air conditioning to cure passengers of envy-induced hot flashes. Of course, all this kit is enhanced by a 5.9-liter V8. Just our kind of Canadian tuxedo.

The CJ-7 offered drivers a road-friendlier alternative to its war-era predecessor. The changes were well received, and more than 375,000 were produced in 11 years. Everything on the CJ-7 was customizable, and buyers were given a buffet of options: nine transmissions, three transfer cases, two axle options and five different engines. This particular CJ-7 was converted to fight wildfires with a brigade in Texas. Like the Willys CJ-2A, it was typically deployed to attack inaccessible infernos.