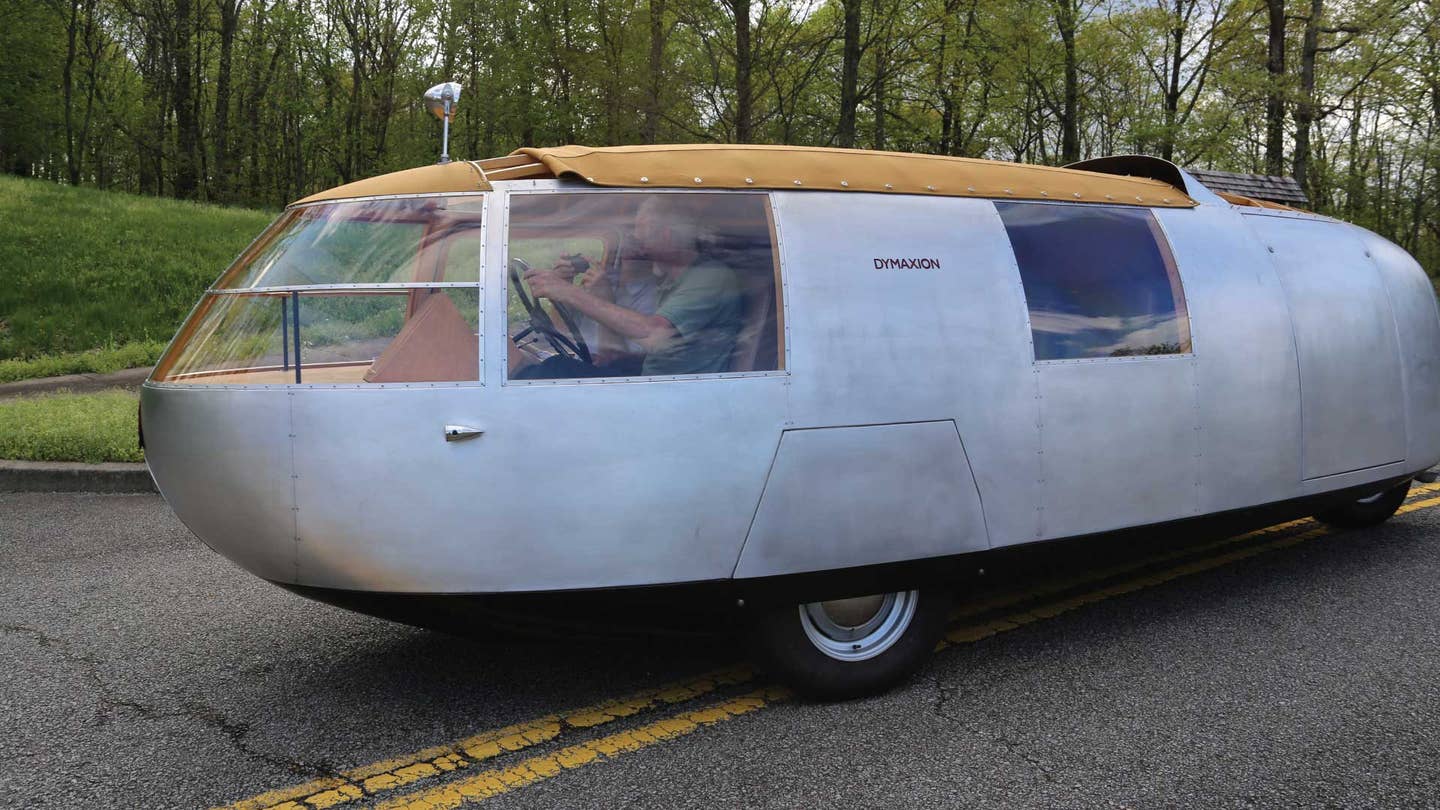 Back in the 1930s and 40s, famed visionary, neologist, and “comprehensive, anticipatory design scientist” Buckminster Fuller predicted a world populated by prefabricated metal dome houses built on stilts, and floating cloud cities built inside of polyethelyne spheres. Like so many prognostications of our collective destiny, Bucky’s visions did not exactly come to pass. But his radical ideas did influence generations to come.

The same can be said, in some ways, for his sole automotive design. Though, after getting behind the wheel of an exquisitely rendered replica of his 1933 Dymaxion car—commissioned by Jeff Lane of Nashville's Lane Motor Museum and built over the course of eight years—we’re not sure if that’s necessarily a good thing.

The Dymaxion Car (the name is a contraction of Dynamic, Maximum, and Tension) was meant to be a re-envisioning of the automobile, one reflective of Streamline Moderne notions of aerodynamics, packaging, efficiency, and engineering. As such, its body was a sleek teardrop shape, skinned in aluminum over a wooden frame. In order to maximize interior volume and enhance forward visibility, the engine was placed at the rear of the vehicle, though it drove the front wheels through a three speed manual gearbox. Since the 180-degree canopy of Perspex windows didn’t open, a retractable canvas roof provided ventilation, as did an air inlet around the headlamp. (A tray behind the inlet would support a block of ice, for an early form of passive air conditioning.) In order to minimize the turning radius of the eighteen-foot-long road-going dirigible, the steering system manipulated the single rear wheel.

All of this contributed to a purported ability of its 85-hp, flathead Ford V8 to provide thirty miles of travel on a single gallon of gas, though this—like Fuller’s claim that the car could travel at 120 miles per hour and seat eleven people—may only have been true under certain circumstances, such as in Bucky’s sleep-deprived reveries. (The man made a spiritual practice of only sleeping a few hours a night.) The rear-wheel steering did allow for nearly perpendicular maneuvers, which wowed onlookers and helped drive orders, and deposits, when the vehicle was demonstrated to the public. But it also made the car incredibly unstable. The first prototype crashed during an early outing at the 1933 Chicago World’s Fair, rolling over and killing the driver, despite the fact that he was wearing a seatbelt.

My experience driving Lane’s Dymaxion replica in rural Tennessee was no less harrowing. The hydraulic steering system provides absolutely no feedback, so piloting this argent ovum feels like driving a mylar beachball through a bog while numbed on Nembutal. Air currents huff against the slab sides and wreaked havoc with my capacity to remain upright. And the single rear wheel has more wanderlust than the wayward caster on a rickety shopping cart, easily distracted by features that come standard on every roadway—like pavement.

Perhaps Fuller was attempting to maximize material efficiency, another of his inveterate obsessions, by forcing drivers to travel at speeds below 12 m.p.h. Or, given his interest in mysticism, maybe he simply encased his transcendent spirit in every Dymaxion and was communicating his visionary will to me via something he called “non-sinusoidal waveforms.” If so, then, mission accomplished. Otherwise, we were simply petrified.

Of course, the experience was also astounding and amazing. Little excites us more than viewing frangible historic artifacts that attempted to presage the distant future via the intrinsically limited perspective of the distant past. Being able to actually touch, enter, and conduct ourselves at speed in something like this—no resto-mod correction, but an honest replica, flaws and all—was akin to taking a spin in Da Vinci’s Aerial Screw, or being taught to speak A Clockwork Orange’s Nadsat by Alex and his Droogs.

“If you never fail, you probably never learn anything,” Jeff Lane says from the passenger seat, as we drive the Dymaxion back to the staging area. “Bucky may have thought of this as a failure, but it’s been an amazingly influential design.” (The awful VW Bus and Fiat 600 Multipla are among its progeny.)

Lane considers the Dymaxion in light of the rest of his collection, which consists almost entirely of vehicles you’ve never seen before, from marques you’ve never heard of, powered by sources you’d never imagined, and styled in forms only realized in a shaman’s hallucinations. “It’s one of those cars that just espouses oddity.”

Stormtrooper rapid transit faces off against a retro-café-styled monster.