The BBC Declares Flying Cars Are Here, and It Sure Is Wrong About That

Say it with us now: An unproven plan is not the same thing as a successful product. 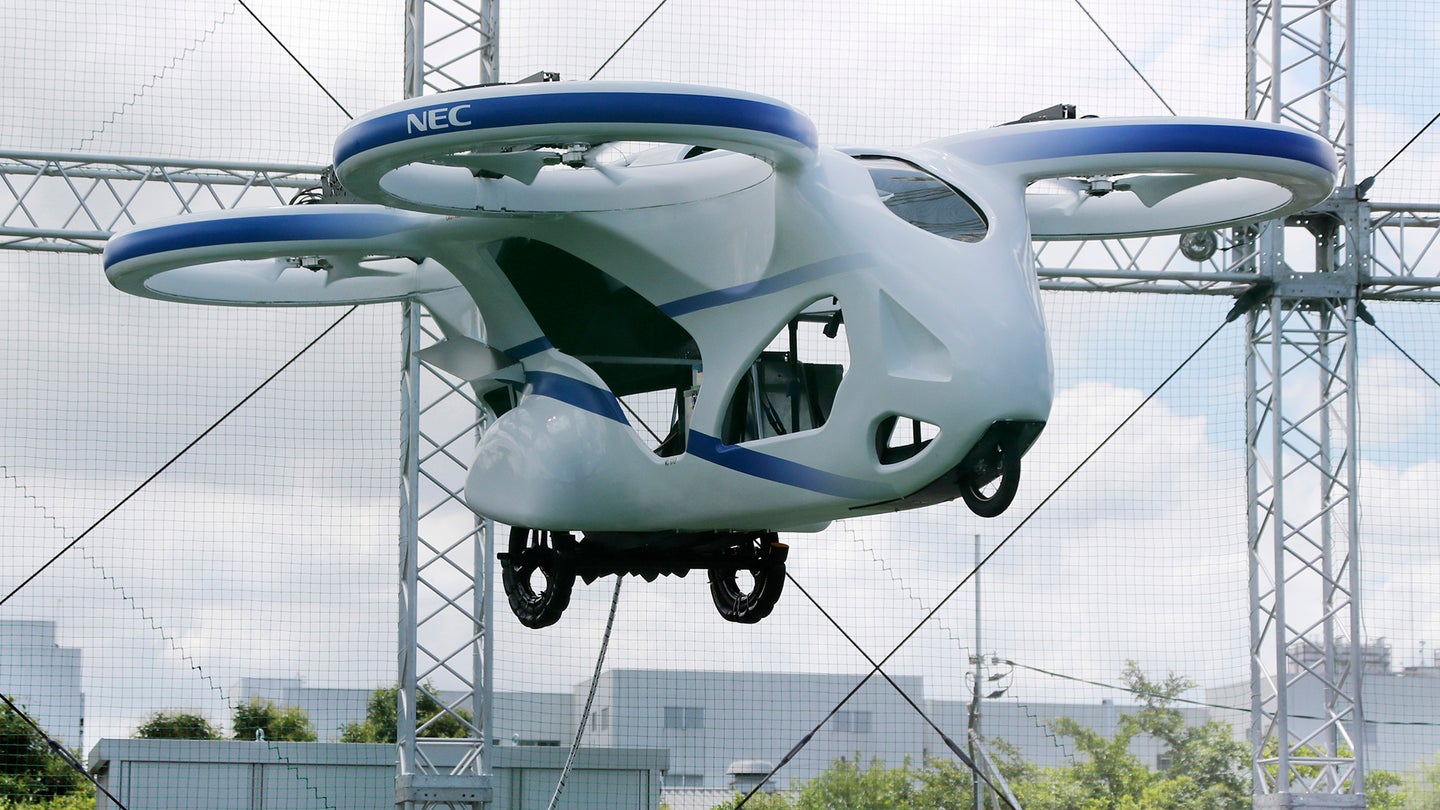 There is no shortage of movies that feature fanciful flying cars: Blade Runner. Harry Potter and the Chamber of Secrets. Back to the Future. And a favorite in our house because we can’t resist Bruce Willis, The Fifth Element. In real life, though, flying cars are a vision we haven’t realized—yet.

But now it's none other than the BBC declaring flying cars to be the next great advance in a splashy feature last week, reporting on the advances in battery energy density, material science, and computing that have spurred the development of a range of personal flying vehicle prototypes in recent years, from electric gliders to fixed-wing craft and quadcopter drones. Thing is, none of the projects mentioned come even close to living up to the bold headline: "The flying car is here – and it could change the world."

Spoiler: It's not. Not only are the vast majority of these concepts not cars in any sense—personal VTOL (vertical takeoff and landing) aircraft is more like it—none are in production at this juncture. At least, none that look anything close to a car. Merriam-Webster's dictionary definition of the word "car" does allow some wiggle room by including "the part of an airship or balloon that carries the passengers and cargo," but still. Not cars.

Few plans have generated as much hype as Uber's, as it's the largest company with the most forward-looking public plans for personal air travel. The ubiquitous ride-sharing company launched Uber Elevate four years ago, and the company claims it's actively working toward “aerial ridesharing" outside its flashy Uber Copter service in NYC (that's since been grounded by the pandemic), but those plans don't involve flying cars either. Uber Elevate says it's building toward a 2023 launch of small, electric VTOL aircraft in Dallas, Los Angeles, and Melbourne, Australia between suburbs and cities. Axios reported that the division has 80 employees and it was looking for a partner with deep pockets or a buyer. This vision may be an expensive one to keep afloat.

The idea of affordable, available transport that whisks you through your commute like an action movie star sounds glamorous, doesn't it? Keep dreaming, for now, because some significant obstacles exist with no measurable plan to overcome them.

There's much to consider if you take a look at the rules for unmanned drones, which are much smaller but affect airspace all the same. The Federal Aviation Administration (FAA) says drone operators should avoid flying near airports because it is difficult for manned aircraft to see and avoid a drone while flying. Operators are responsible for any safety hazards their drone creates in an airport environment. Layer on top of that the ongoing air traffic controller crisis that has been on and off for years, and you have a logjam that's going to take a lot longer to unravel than the gridlock on our highways.

NATCA, the national air traffic controllers association, says the FAA’s certified professional controller workforce remains at a 30-year low. About 16% are eligible to retire, and last year, the FAA lowered its air traffic controller hiring target from 1,431 to 907 as a result of the shutdown. Ultimately, even if the FAA were to hire a whole new crop of ATCs, it takes two to five years of training before they're capable of separating air traffic on their own. If we don't have enough eyes on the skies, then that will be a major problem.

This summer, New Hampshire planted a stake in the ground as the first state to enact flying car regulations. While no street-legal flying vehicles are available for purchase, the “Live Free” state is here for it when they are. Here’s the catch: the regulations allow for driving home, but not liftoff or landings. Interesting. Not to be outdone, the city of Orlando, Florida last week revealed plans for a 56,000-square-foot transportation hub they're calling a "vertiport." They call the vehicles "jets" and the New York Times covered it as a flying car hub.

Then there's the fly-by-night nature of many of the startups jousting for attention and investment—many of which are destined to go broke. It's the name of the game in any burgeoning industry, but the intangibility of flying cars seems to make it a tempting target for less-than-stable businesses.

MIT-graduate-founded, now Chinese-owned Terrafugia is still accepting Letters of Intent to Purchase (along with a $10,000 deposit) its Transition Flying Car. It boasts foldable wings, a hybrid electric motor and seating for two, but no word recently on when it might be ready for production (and psst-still not a car). As we reported in August, Terrafugia was originally supposed to make Transitions available in 2009. And then about ten years later there was a surge of excitement when CNET Roadshow reported it would be ready in 2019.

And then radio silence. The company hasn't updated its social channels since 2019, and no news is... well, it's no news.

The market is bursting with anticipation, with companies worldwide competing for the chance to develop commercial jetpacks, flying motorbikes and personal air taxis. Nobody wants to miss out on the potential eruption of this trend, so even gigantic companies like Toyota are getting in on the fun. In August, the Japanese company SkyDrive (an apt company name), financed by Toyota funding, took a test flight in its SD-03 prototype. They also say they expect to launch in three years, and that remains to be seen if it follows suit after Terrafugia.

Hey, I’m ready for my jetpack too. But if you consider the pattern of pushback for personal flying vehicles, it seems it's going to be a while.

They Keep Working on Flying Cars, But You Still Won’t Own One Any Time Soon

New Hampshire’s highways will see street-legal aircraft…as soon as one actually gets built.