The Tesla Semi Is Finally Headed to 'Volume Production' 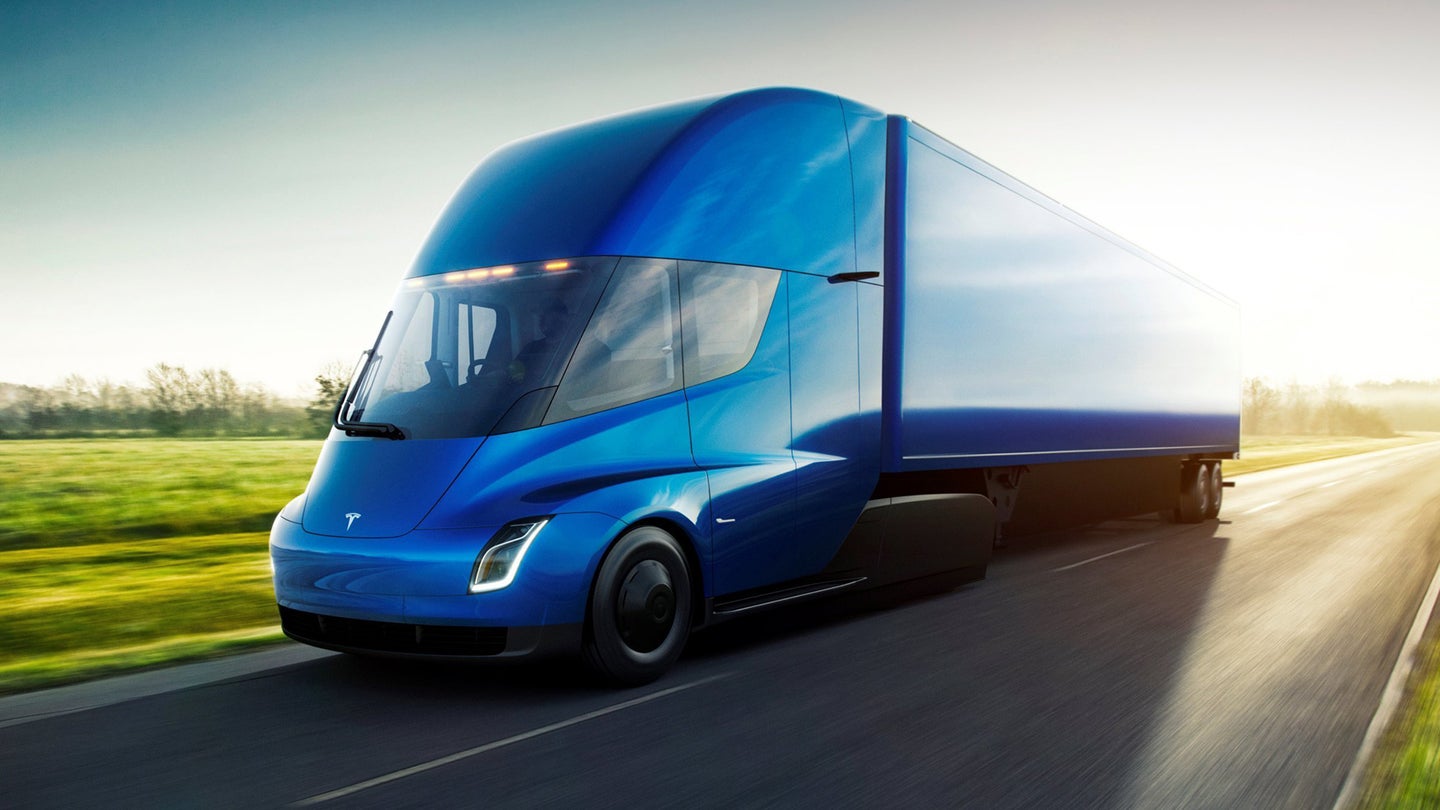 Good morning and welcome back to Speed Lines, The Drive's morning roundup of what matters in the world of cars and transportation. It is Wednesday, my dudes. Today we're talking about electric semi-trucks, and we're checking in with the airline industry. (Spoiler alert: things are bad.)

This is a brief news dispatch first reported by Reuters, but it is still worthy of a headline: if an internal Tesla email from CEO Elon Musk is to be believed, then the automaker's electric Semi commercial truck is ramping up for “volume production." Musk didn't specify a timeframe for this, but it's implied this is happening as the company gets back on track after a coronavirus-related halt.

Here's the fuller memo from CNBC:

“It’s time to go all out and bring the Tesla Semi to volume production. It’s been in limited production so far, which has allowed us to improve many aspects of the design,” Musk said in the memo. “Production of the battery and powertrain would take place at Giga Nevada, with most of the other work probably occurring in other states.”

We've seen various prototypes of the Semi cruising around since its surprise debut way back in 2017, but the electric long-haul truck—said to have a range of up to 500 miles—hasn't been as prominent in Tesla's plans as other headline-grabbing products. (Of course, it's gotten plenty of deposits, same as the supposedly forthcoming new Tesla Roadster.) PepsiCo and UPS have put in orders.

If true, this production news is a big deal. It means Tesla's getting into the hauling game, and it means the automaker again has to start delivering on some big promises and in an area that's largely new ground for it. Still, don't expect to see any deliveries until 2021, per Tesla's own investor guidance.

While we're on the subject of electric—and in this case, hydrogen as well—semi-trucks, let's check back in on newcomer Tesla competitor Nikola Corp. (Yes, they're named for the same guy. These EV startups need to find some new people to get their names from.) As we noted in yesterday's Speed Lines, Nikola's IPO made its founder very wealthy almost overnight. And the company itself skyrocketed in value on Monday and Tuesday.

It's now valued at $34 billion, despite claiming it will produce no revenue at all in 2020, as Automotive News notes. Nikola now has a higher market capitalization than Ford. You know, Ford, the 117-year-old maker of America's best-selling vehicle.

Here's a slice of how crazy everything has been for the company this week:

It has some competition, but no stock on the auto sector is a better reflection of the equity market’s recent exuberance than Nikola Corp.

The aspiring battery-electric and hydrogen fuel-cell truck maker debuted on the Nasdaq last week following a reverse merger and its stock quickly took off, doubling on Monday and rising another 28 percent shortly after Tuesday’s open. Trading was halted twice within the first 40 minutes due to volatility, with the shares plunging as much as 22 percent. They closed Tuesday's trading up 8.8 percent to $79.73.

That story says that even though Tesla is overvalued—and Musk has admitted as much—what we're seeing with Nikola is in "another stratosphere," and it's emerging as a poster child for just how absurd and arbitrary valuations are. Granted, investors make bets on the future, and it's right to be excited by what Nikola might do.

But it hasn't done anything yet, and it's already more valuable than Ford. I don't understand it either, but I guess that's why I don't have a Big Business Genius Brain.

And Nikola's already being targeted by the same skeptics as Tesla:

That's how much of a loss the global airline industry is forecasted to post this year as travel all but comes to a halt amid the coronavirus pandemic. According to Bloomberg, it's projected to be the biggest loss in aviation history. And Reuters says revenue is expected to be down more than 50 percent from last year.

This is based on newly released data from the International Air Transport Association. Here's what we're looking at now, and into next year, once again via Reuters:

“Every day of this year will add $230 million to industry losses,” IATA Director General Alexandre de Juniac said. The average loss amounts to almost $38 per passenger flown. In 2021, IATA forecast losses at $15.8 billion to take the two-year total to about $100 billion as traffic struggles to recover and airlines slash fares to win business.

Cargo is a bit of a bright spot, but it won't be enough to offset the massive losses from passenger flights being down. Do you plan on flying anytime soon?

We Mapped Where Customs and Border Protection Drones Are Flying in the U.S. and Beyond (Gizmodo)

The nerve center of the American news cycle (Axios)

Is the electric semi-truck game the next big thing? And is Nikola's valuation absurd? (I mean, the answer's yes, but I want to hear what you have to say.)