A day with Nismo offers a tantalizing glimpse at Nissan's electric performance aspirations. 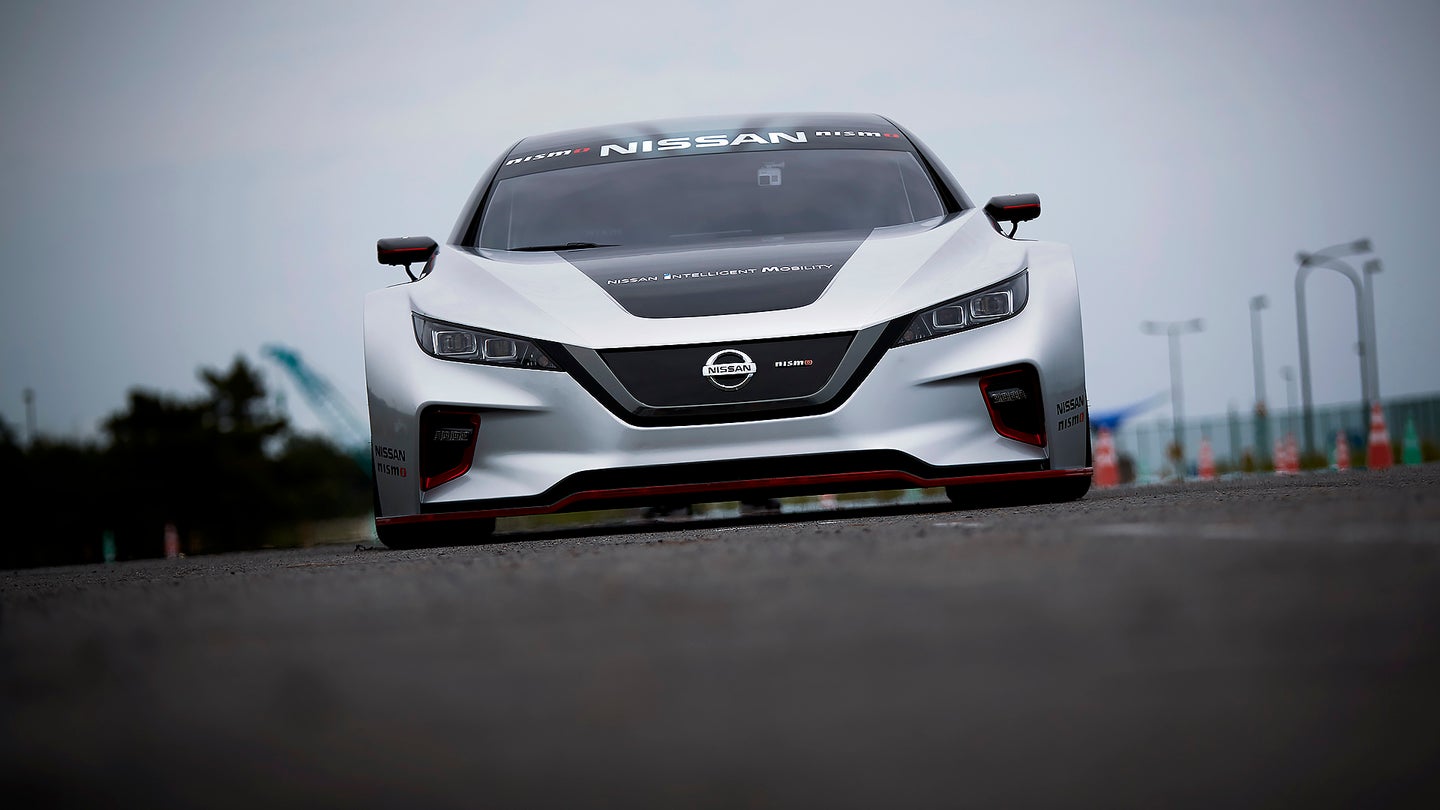 How to convert a herbivorous Nissan Leaf into a bloodthirsty racer? It’s simple. You take the new 62kWh battery of the Nissan Leaf. You take the EM57 electric motor of the Nissan Leaf. You take the inverter of the Nissan Leaf. You pretty much toss the rest. You put what you took from the Leaf on two carbon-fiber sub-frames, you surround everything with a carbon-fiber monocoque body with integrated carbon-fiber-reinforced roll-cage. You decide that you could do with a little extra oomph, and you add a second EM57 electric motor, one for the front axle, one for the rear. While you are at it, you add a race-spec limited-slip 6.028 ratio gearbox, along with a hotrodded controller for better inverter utilization and improved cooling, so that each EM57 electric motor delivers 120kW instead of the 110kW of the Leaf, and voila, you’ve got yourself a 240 kW Nissan Leaf Nismo RC_02.

The man who explains to me the definitely don’t-try-this-at-home conversion project is Motohiro Matsumura, Chief Operating Officer of Nissan’s performance arm Nismo. We are at the Oiso Prince, a beach resort an hour southeast of Tokyo. The place is empty except for workers busy adding new blue coat to the gunnite of the huge wave pool. In Japan, everything goes by the clock, and in two weeks, the place will be mobbed for a beach season that goes exactly from the beginning of July to exactly the end of August, on the dot, kisoku wa kisoku da, rules are rules, no exceptions, the weather be damned.

I most certainly am not among the many writers with racing aspirations. I came all the way to Oiso, Kanagawa, to hear how to turn a docile Leaf into a howling beast, and howl the RC_02 sure does. Forget the throaty sound of long rows of cylinders, also forget the near silence of an electric road car. The electric racer screams and screeches as if it wants to be a WWII Stuka in its terminal stage.

With the resort deserted, we have its monstrous parking lot to ourselves, and it is converted into a miniature race course, where I am given the choice of hurling the RC_02 around the parking lot myself, or (my preferred option) to leave the hurling to professional race driver Tsuigo Matsuda, who does his level best to scare the living daylight out of me in two laps around the Oiso Prince parking lot. When you get older, you lose bit of your hearing, and today, it is a blessing.

But I also didn’t come here to listen to engines. I came to listen to Matsumura-san, to hopefully find out how, why and what for the RC_02 was built. As far as car racing goes, I’m not even engaged in the vicarious way, and in my naivete, I originally thought the RC_02 was Nissan’s entry into Formula E. At beachside, I am quickly disabused of that stupidity. “Nismo does not conduct Formula E activities, Formula E is a Renault Racing matter,”” says Matsumura, and he makes the pained face recently common to Nissan people when they must discuss their Alliance partner Renault. If the two would have to declare the status of their relationship on Facebook, both would have checked the “It’s complicated” box. It definitely is.

As its contribution to the Alliance, Nissan seconds some Nismo engineers to the Formula E team, mainly to baby the control systems, “which are Nissan technology,” says Matsumura. But that’s the extent of Nismo’s electric racing activities, I’m told. But what about the pages and pages of mentions when you put “Formula E Nissan” into Google? I get 57 millions of mentions, and after checking, I receive the official answer from Nissan that Matsumura spoke for Nismo, and that that in Formula E, Nissan supports the independent e.dams team, which formally was racing partner of Renault. Oh, and Nissan also last year bought a small stake in e.dams. Did I mention it is complicated?

Nissan/Nismo’s RC_02 was announced end of November 2018, but its launch was overshadowed by the surprising arrest of Alliance Chairman Carlos Ghosn, ten days earlier on the tarmac of Tokyo’s Haneda Airport. For months, Nissan stopped pretty much all PR activities, which would have been for naught anyway. All journalists weanted to hear was everything about Ghosn, how long the Alliance would hold up, and when Nissan CEO Hiroto Saikawa would step down. Today is one of the first steps to gingerly get back into the public relations business.

The RC_02 is an important part of the public relations business. “Basically, there was a request from the marketing department to align our messaging with Forumla E,” Matsumura tells me. “We didn’t have a Formula E car for the media, so we built the RC_02 to deliver that experience.”

A change of messaging was necessary, because Nissan, the erstwhile leader in electric vehicles, had lost the propaganda war to Tesla. The original Leaf was designed as granola-on-wheels, because Nissan’s planners fell victim to prospective customers lying to pollsters about their true purchasing motives. They gave the “we want to save the planet” answers they thought were expected, when in fact, polar bears be damned, they secretly lusted for the acceleration of a supercar, now possible through the instant torque of an electric motor. Nissan’s upgraded Leaf e+ was of little help to re-gain mind-share. With its too-little-too-late 62 kWh battery, it was launched last January into the aforementioned Ghosn-induced messaging vacuum that sucked the oxygen out of any good news.

We have a cup of coffee, and the power for the coffee machine is delivered by a Nissan Leaf parked in the corner. As we discuss the RC_02 further, it turns out that it could be a perfect conversation piece to keep the discussion going until Nissan’s long-awaited new electric platform turns into a buyable product sometime next year, possibly as the Leaf IDS, or as the IDS, who knows. Matsumura hints that Nissan’s next-gen EV might come with “the same motors, the same inverter, and the same tricks” as the RC_02, meaning 2 times 120 kW engines with a combined torque of 640 nm. With 3.4 seconds from 0 to 100 km/h, the RC_02 comes close to the 3 seconds (“occasionally, 2.9 seconds” says Matsumura) of the gasoline-powered GTR, but that’s with extreme carbon-fiber light-weighting. “After 2020, we might have a production motor with 160 kW, two of them would bring 320 kW,” Matsumura says. “With that, it is possible that the IDS beats the Nissan GTR.”

Further on down, the formerly frumpy Nissan Leaf could leave its GTR (and possibly the ludicrous competition) completely in the dust. “Quad motors are possible, even highly probable,” muses Matsumura. Four times 160kW would be 640 kW, or 840 hp.

With that, this reporter’s job is done, and I can go back to Tokyo. I am taking the ultimate green machine, the train.