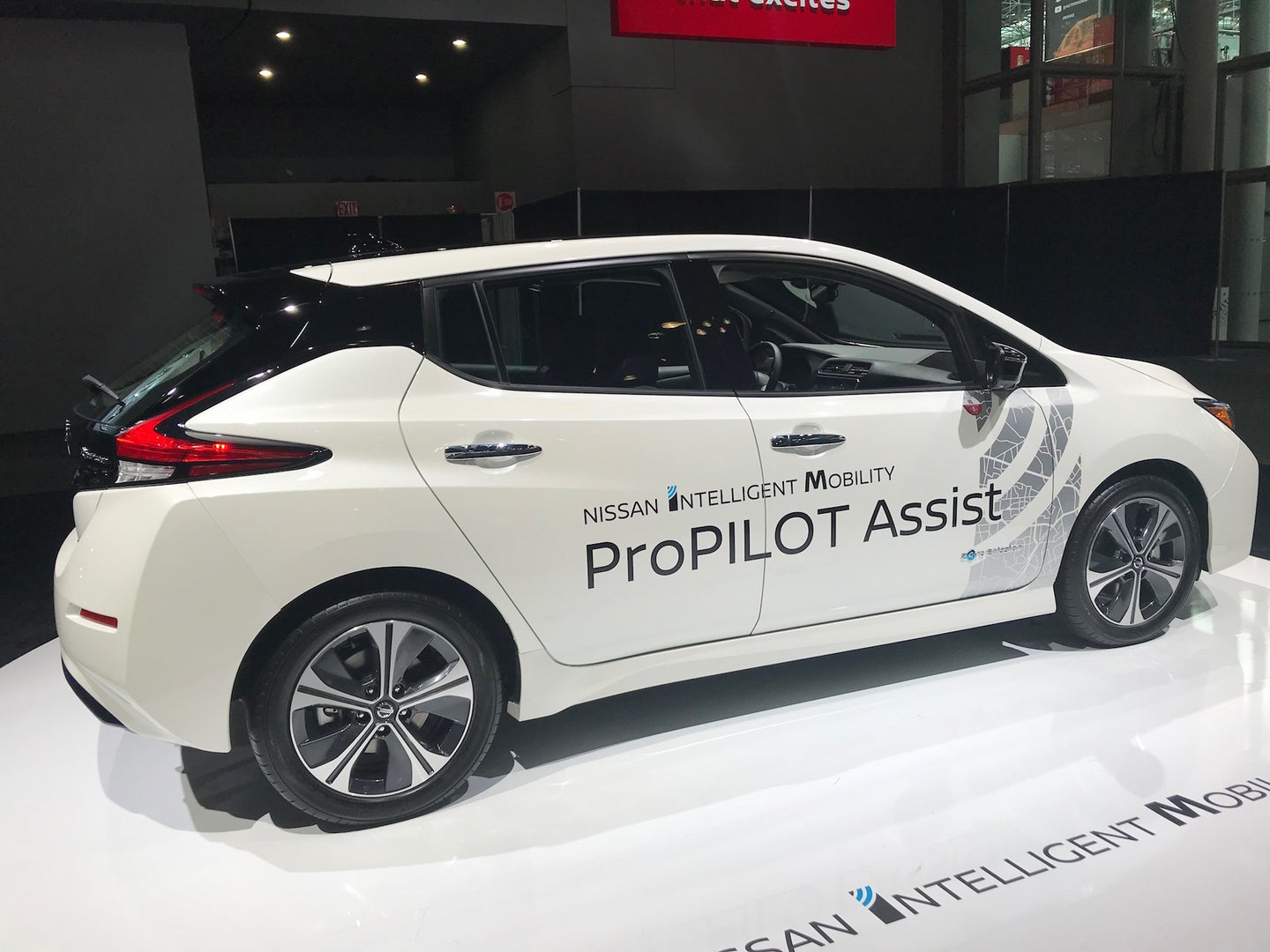 Virtual and augmented reality exhibits were a trend at the New York International Auto Show. So, naturally, I had to try it out for myself. I slipped into a pair of Microsoft Hololens goggles for an augmented reality experience and looked onto a small white table containing a miniature 2018 Nissan Leaf.

Blue rays projected from the goggles and as I moved my head down, the rays pointed toward circular blue menu buttons. To select a button, all I had to do was point the rays toward the menu and then look away. Each button contained a feature of Nissan’s Intelligent Mobility, the two-year-old marketing initiative that describes the company’s emerging technologies and its aim to produce zero-waste vehicles. Intelligent Mobility is meant to encompass driving, power, and technological integration.

Nissan's Hololens experience walked me through the 2018 Leaf's assistance features, its all-electric engine, and that car's built-in tech. The semi-autonomous Leaf features Pro-Pilot Assist, which helps detect surrounding traffic and helps the car keep a comfortable distance. It also contains an e-pedal, which allows drivers to accelerate and decelerate with one switch. And its lithium-ion battery supports up to 147 horsepower.

Earlier this year at CES, Nissan launched Brain-to-Vehicle technology, a feature that uses algorithms to detect how your brain wants to drive.

At the New York Auto Show, as I moved my head and multiple holographic Leaf models appeared, it definitely felt like a B2V experience. I saw the electric, semi-autonomous model’s unique Pro-PILOT assist feature as the projected blue cars moved between virtual lanes at controlled speeds.

The $3,000 holographic goggles were a treat to try out, and the 3-D simulations were impressive and informative. But we should expect nothing less from Nissan. The Leaf, which debuted in 2010, is the world’s best selling electric car, and 40,000 of its 2018 models have already been ordered. The company is well on its way to break its record in electric-vehicle sales this year. And if you can't make it to the New York Auto Show, which runs through April 8, you can download Nissan's Innovation Experience App to view the LEAF's unique features virtually from the comfort of your own home.

In addition to Nissan, other automakers got involved with the AR experience too. Dodge created a virtual drag race experience, where users could race against each other in an arcade-like setting, and Toyota created a driving experience where you could virtually drive its new Fine-Comfort vehicle.