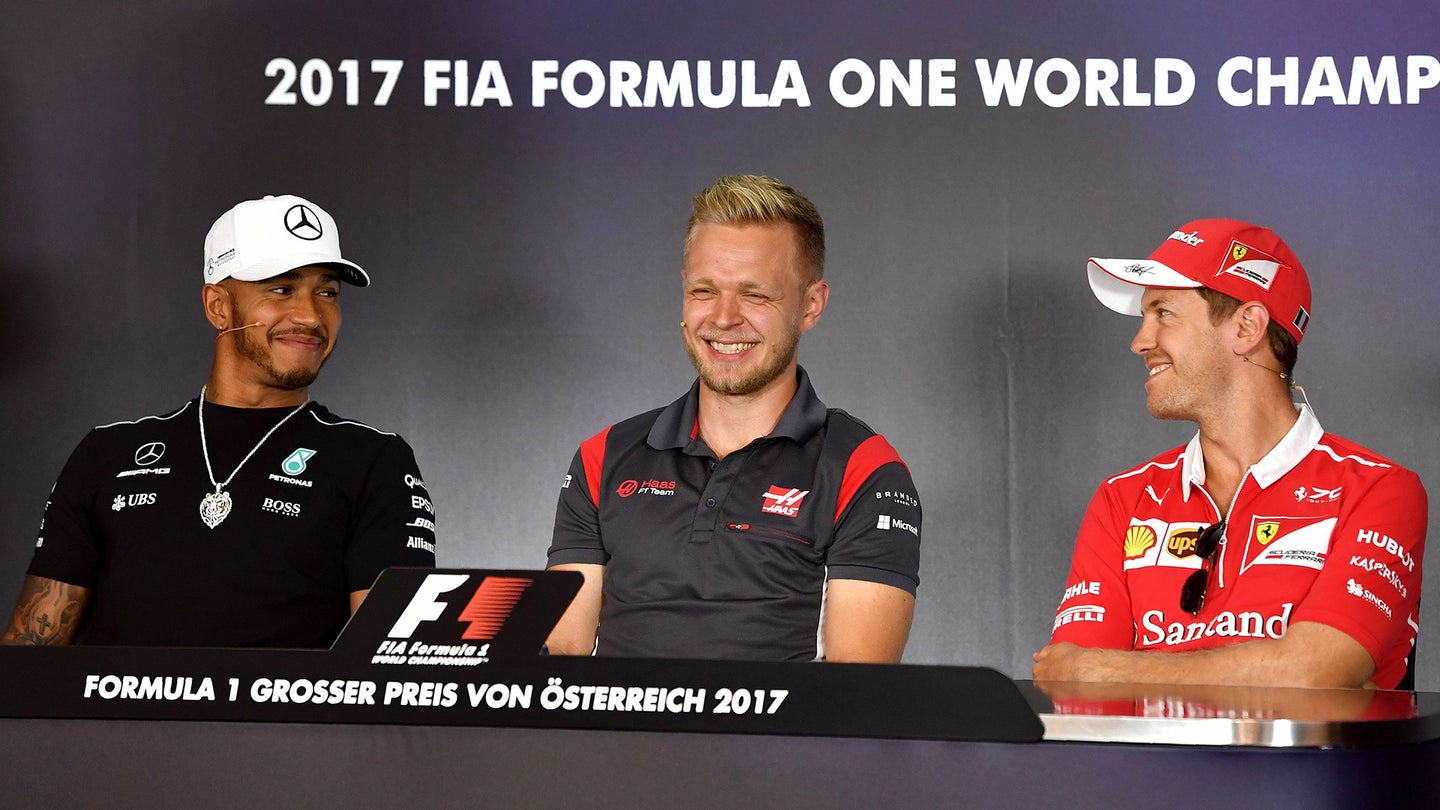 At the driver's press conference today for the Austrian Grand Prix, Lewis Hamilton and Sebastian Vettel were paired up and took questions regarding the Azerbaijan Grand Prix incident. The pair seemed quite cordial with each other and seemed to have put the incident behind them.

They recognized that the only way forward from here is to go racing, rather cause a spectacle in the press. It's better for them to be frenemies than to have no respect for one another, which would lead to unprofessional and dangerous driving from both of them. A heated rivalry is great for any sport. Being able to keep that rivalry healthy, professional, and contained is just as important. Just like Sam and Ralph, you have to know when it's time to punch out and hang it up for the day.

The clip of the press conference that Formula One posted online, which you can watch below, conveniently ends before Hamilton gave an answer that was fairly critical of Jean Todt and the FIA, which we'll get to shortly.

"Sebastian and I spoke after the race on the Monday and then shortly after that he messaged me the day after," said Hamilton. For me, I just said that I still have the utmost respect for him as a driver and will continue to race him hard throughout the rest of the season in the same way I always have. No less hard than we have already up until now."

"I accept his apology and we move forward," he said.

"It was the wrong move to drive alongside him and hit his tire, that is I guess what you all want to hear about but there is nothing more to say," said Vettel. "Am I proud of the moment? No. Can I take it back? No. Do I regret it? Yes."

"Obviously what I did was wrong and I apologize," Vettel said.

Vettel also joked with a reporter when asked about why he didn't admit to the contact after the race. Vettel explained that it was more important to talk to Hamilton first about it, saying of the press that he doesn't have their phone number, nor does he want it.

Towards the end of the press conference, Hamilton was asked if he was happy with the message being sent by the FIA regarding not further penalizing Vettel and setting an example for young drivers. Hamilton may have forgiven Vettel, but he still feels that an additional penalty should have been handed down.

Hamilton, critical of FIA president Jean Todt, answered: “I don’t think anything changes. With all due respect, Jean should be sitting next to us, to be honest, to answer some questions, perhaps, because I think that they didn’t change anything on the Monday so the message that was sent remains the same.”

Also present at the press conference was Haas driver Kevin Magnussen. While he did get asked some questions, like which of these other two guys do you think will be the next world champion, he mostly just sat between Hamilton and Vettel. The look on his face is one of someone wondering why he was there in the first place.

Here is the short clip of the press conference from the Formula One Youtube account. You can watch the full version here.