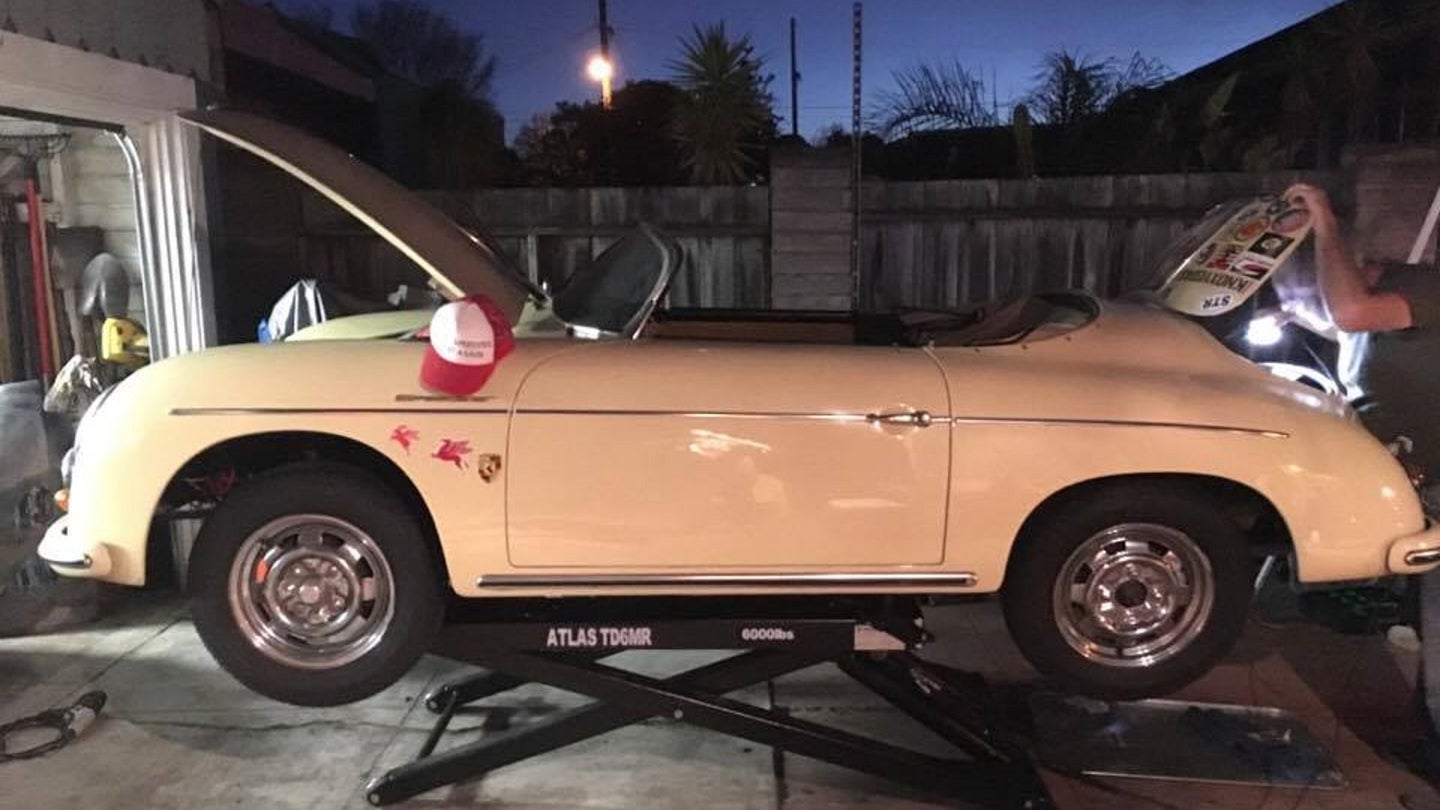 In the long-gone days of close tightly-knit local communities, neighbors used to help each other out with overwhelmingly large projects. Building a barn from the ground up is too big a project for just one family, so they would invite their entire community over for a day of barn raising. The host would provide the food and drinks in exchange for their friends' day labor. A new barn was necessary for the community to remain strong through the strength of just one extra family. People were happy to help their neighbors with a project like this, because they knew one day they would need to call upon the might of the group for their own overwhelming project.

So how does this all relate to cars? Well, a friend of mine (we'll call him Chris) recently hosted a barn raising style party for his car friends to come help him get his Porsche project back up and running. While this speedster is actually an early Intermeccanica-built Canada-assembled Volkswagen-based kit car, it does use a real-deal Porsche 912-sourced engine for way more power than it'll ever need to be fun. Even if this project weren't Porsche-centric I still would have helped out, but it sure didn't hurt.

Chris has owned this car since the 1990s, but he has never actually driven it. When he and his father dragged this car home, the engine was, ahem, not exactly in working order. Over the last 15 years or so, the engine was hauled out of the car, rebuilt from the crankcase outward, and reinstalled into the car. Aside from that, not much has been accomplished. Marriage, work, kids; life gets in the way. I know how it goes, you know how it goes. Things like a broke-ass fake Porsche end up getting pushed to the back burner when you have to deal with three very small children.

So, a dozen cooks in the kitchen isn't the best way to make a flan, but it worked alright in the rebuilding of this Speedster project. The car was basically a rolling shell with horrifyingly short-cut electricals. The guy who initially built this car up from the kit half-assed a lot of things, including a clutch cable that wasn't actually spliced together as much as it was taped together. We needed to get pretty much everything sorted but the suspension and the bodywork.

Over the course of a 13-hour day, we managed to get a whole laundry list of things completed that hadn't been right for nearly two decades. As things slowly got knocked off the list, the Speedster started getting closer to road-worthiness. It didn't have an interior, it didn't have working brakes, it didn't have a running engine, it didn't have a fuse box. Thanks to a dozen guys fettling with various components on this car for a day, all of those things exist now. It's not quite ready for prime time, as there are a few electrical issues to sort, but it's a hell of a lot closer than it was before we started.

If you have a barn-stored car that has a minor issue, schedule a caterer, buy a case of beer, bake up some cookies, and have a good old-fashioned community barn raising for your project. Just don't be surprised when the trend catches on and you're invited out to help a friend with their project. We need to keep our vintage car loving community strong, and events like this not only build camaraderie and report, but it might add another car to the list of people who want to go on a drive to Sunday brunch with you, or attend your car show. It's mutually beneficial, plus it's just a good idea to help your friends when they ask for it, you know?