Change and a death in the Joe Gibbs Racing family propelled the veteran driver to new heights on Sunday. 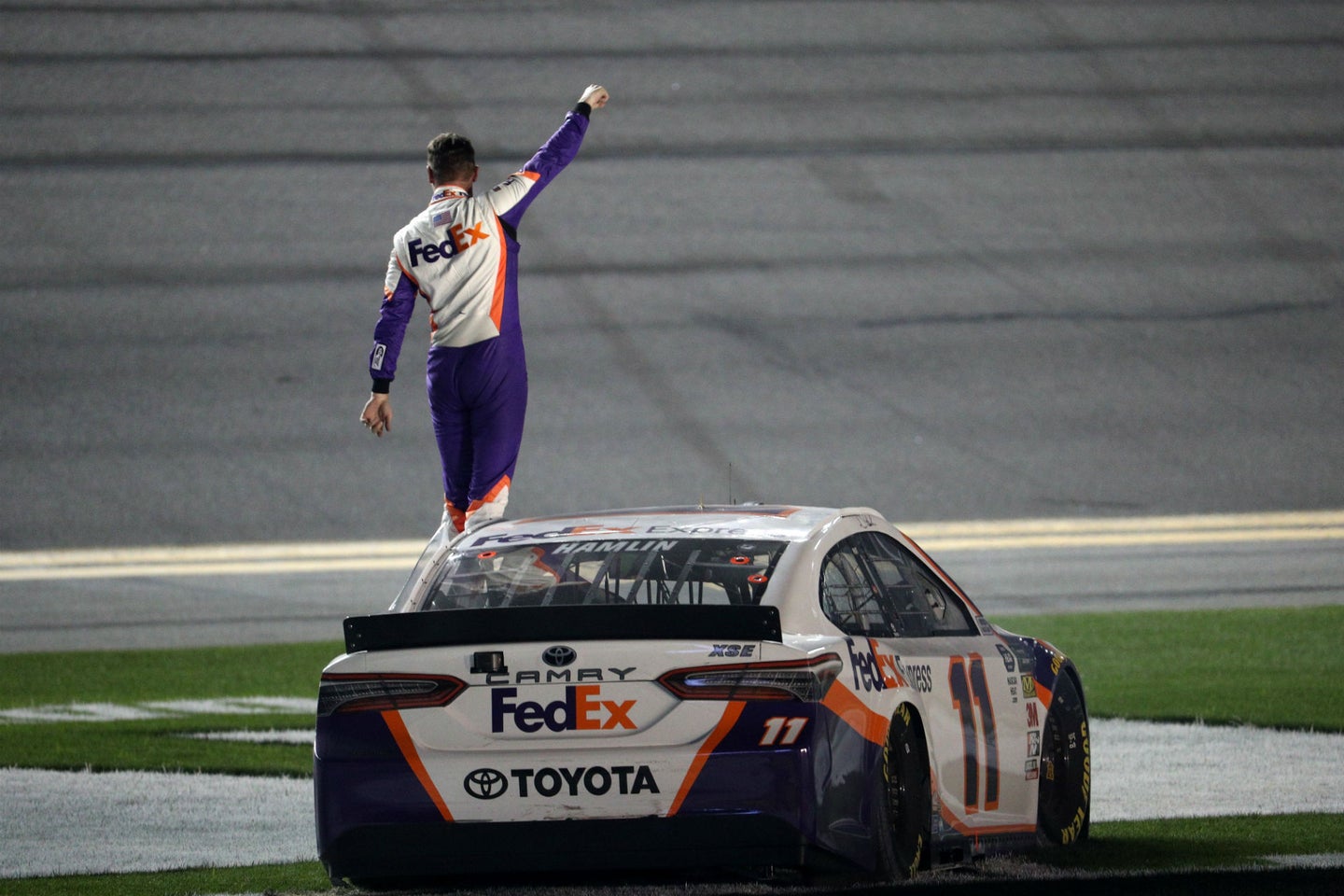 Until Sunday, Denny Hamlin hadn't won a NASCAR Cup Series race since September of 2017. The 38-year-old struggled to find his groove last season and, going into this weekend's Daytona 500, he had a new crew chief and was without his longtime friend, Joe Gibbs Racing co-founder J.D. Gibbs, who passed away in January. Some thought that the popular driver may have been falling victim to the youth that surrounded him in NASCAR's top series, but a masterclass in both strategy and skill (plus a little bit of luck) landed him in Victory Lane for a second time at the fabled 500-miler.

Joe Gibbs, JGR team owner and father to J.D., was the first to detail the significance of Hamlin's 32nd career Cup Series win.

“It’s the most emotional and the biggest win I’ve ever had in my life—in anything,” said Gibbs, who coached the Washington Redskins to three Super Bowl victories. “It was just an unbelievable night, unbelievable crowd. The whole thing was just a special memory for me, and it’s one I’ll never forget, and it’s the most important night of my occupational life.”

J.D. Gibbs was particularly close with Hamlin as he helped bring him aboard the JGR crew some 15 years ago. For Hamlin's entire Cup Series career, he's boasted the No. 11—also J.D.'s number—on both doors, and on Sunday, he wore his friend's name on the side of the car in remembrance of the 49-year-old who lost his life to a degenerative neurological disease.

“I know (Joe Gibbs) would have been happy with any one of his cars going out there and getting a victory,” Hamlin said. “But obviously one with his son’s name on the door and number, it’s probably a little more special.”

In fact, JGR had the best day of anyone at the track with two of its Toyota Camrys also rounding out the top three. In all, the team's dominant performance surprised the crowd and silenced the Ford faithful which were sure that one of the new Mustang Cup cars would be crossing the finish line first.

But Hamlin, Kyle Busch, and Erik Jones didn't have it easy.  Busch won the first stage of the race, and he kept up his pace throughout the 200-lap event. On Lap 191, however, "The Big One" struck and a crash sparked a massive pileup that knocked out drivers from the middle to the back of the pack. It collected the fourth JGR Toyota of Martin Truex Jr. along with a slew of other cars that had either ran up front or challenged for the lead on multiple occasions.

“We just were fortunate to really be up front at the right time to avoid those,” Hamlin said. “I mean, we were really one row in front of all the mayhem the entire time at the end.”

As the call came in from Hamlin's crew to take the high line for the remainder of the race, the Florida-born racer knew he could nab victory away from his teammates.

“When he gave me the top, I literally was doing a little cheer in my mind,” Hamlin said. “My playbook said always choose the top, no matter what, no matter who’s behind you.’”

Finally, after nine caution periods and over four hours of racing, Hamlin saw the checkered flag wave. And while it may not have been as dramatic as his record-setting 2016 Daytona 500 finish, it was even more satisfying.