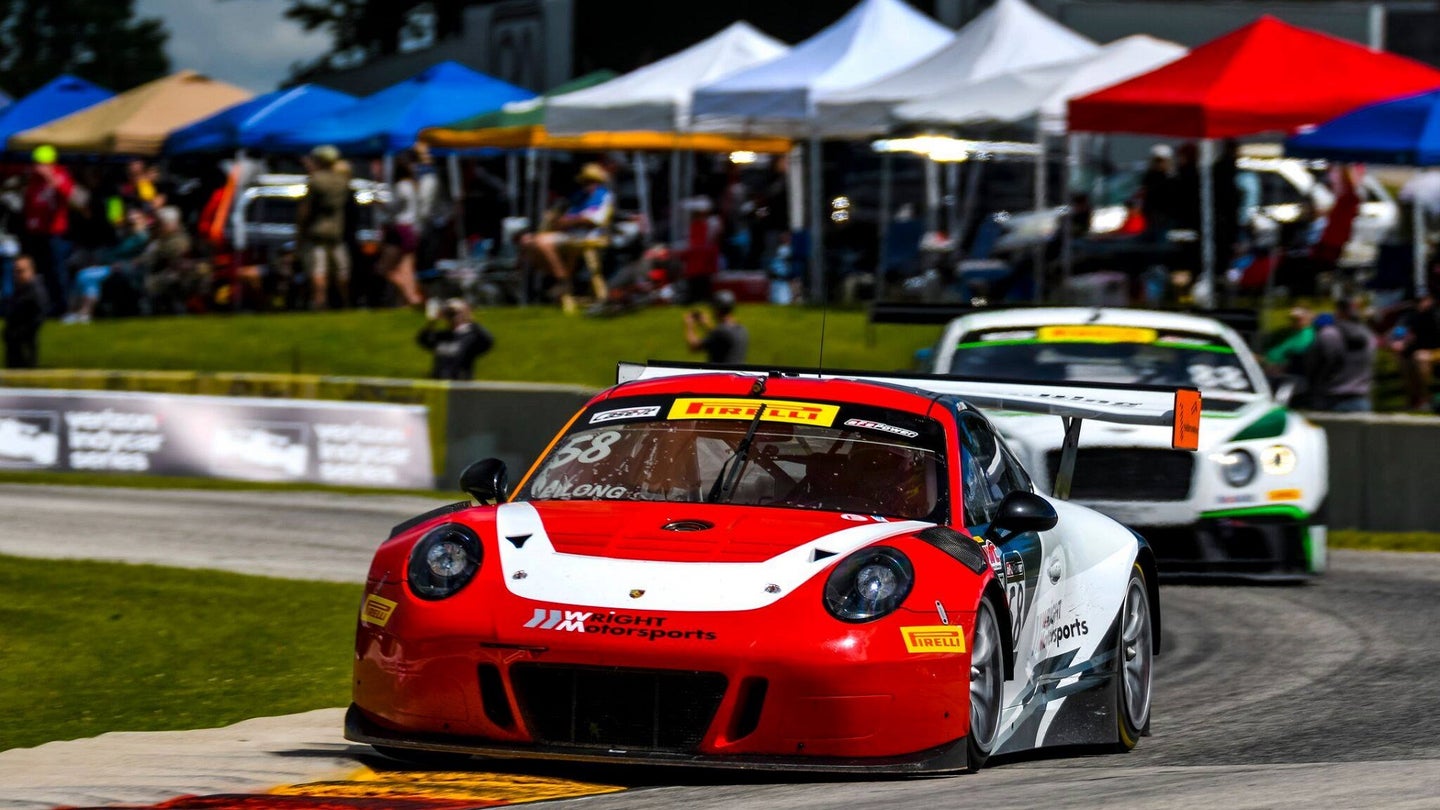 This weekend marked the 9th and 10th Pirelli World Challenge GT class races of the season, a doubleheader traditional sprint race weekend in Elkhart Lake, Wisconsin. Going into the weekend, Porsche's Patrick Long was tied for second in the series championship points with McLaren's Alvaro Parente, both ten points behind Cadillac's Michael Cooper. All season, Long has been competing at the front of the field and has had a decent go of the racing thus far. A couple of hiccups for the Porsche driver have kept him from running away with the championship, but he was in fine form this weekend in Wisconsin.

27 Year Old Hong Kong-born Bentley driver Adderly Fong took the race victory on Saturday, the first win of his career. The race began with a bang as Fong fought hard with Cadillac's Johnny O'Connell through the first half of the circuit. The two eventually had a coming-together that ended with O'Connell spinning off the circuit and rejoining at the back of the pack. Taking full advantage of the situation, as well as a bit off luck, Pat Long moved his Wright Motorsports Porsche up into second position. Long drove a smart race, running conservatively for the remainder of the 50-minute race. During the final few laps, Long put a lot of pressure on Fong, but found it difficult to get around the double-wide Bentley GT.

Pat Long on his race 1 podium -

“Johnny had a good jump at the start and I went with him. Then going into Turn Five, it was six into one and somebody had to give. From my perspective, it’s pretty hard to go side-by-side in Turn Five and I think Adderly had the line so I stuck behind him and again the inside line paid off. After that it was a pretty straight forward, qualifying attack for the whole race. That’s about as physically and mentally tough as it gets; no yellow flags and absolute sheer pace. The Pirelli tires are consistent enough that you can push them all the way through.”

“Six auto makes in the top six is not manufactured; that’s sheer competition. There are a lot of two-car teams, factory teams, small independent teams such as Wright Motorsports who I’m driving for. In the end we all want to race as drivers and race for victory and know that you’re going to come in and have a fighting chance.”

“We focused on putting the Bentley under pressure the whole race. The last lap was really close. Fong was stronger in some corners and I was stronger in others, but we were ultimately able to fight right to the end."

James Sofronas on his race 1 victory -

“It was good to mix it up front with the top ten. We’re running a good pace and staying with the lead pack and then it started to get a little dicey. I realized that there’s no advantage to sticking my nose in here and holding true with those guys so I thought I would just back off, take a win and get the points and let the car rest. We were running really good lap times, it was consistent the whole way. The GMG Racing guys performed flawlessly and I’m really proud of them and all the guys and look forward to (tomorrow’s race.)”

By setting the fastest lap of race 1, Fong was awarded the pole position for race 2, with Pat Long starting second. At the first corner, after the green flag fell, Pat Long jumped up into the lead of the sprint field, diving deep on the brakes and making it stick. There was a lengthy red flag period in which cleanups were affected and barriers were repaired, thanks to a huge crash incident on lap 5. The aftermath of the event, including a video onboard from Ryan Eversley's Acura, can be seen here.

Based on this view, it appears that Gainsco Porsche driver Jon Fogarty turned across the bow of Eversley's Acura, not quite clearing his front bumper, then collected the other Acura, Peter Cox, in the process.

When the race restarted, Pat Long maintained and then stretched a lead at the front of the pack. Saturday's race finished Fong-Long, but Sunday's event would end with a Long-Fong podium. Johnny O'Connell recovered from Saturday's shemozzle to take third in Sunday's race.

Pat Long on his race 2 victory -

“These PWC weekends, it’s so close between all the manufacturers so you have to seize track position by getting a qualifying lap in that first race which is unique in this championship. Then every single lap there wasn’t a millimeter of road left to try to stay ahead of Adderly since he was on his game all weekend. I think he had the car to beat. Sometimes, it’s the scenario that gives you that rewarding feeling over a weekend and certainly, I think we squeezed a little bit extra out of the car. That’s how we’re going to try to put a championship together. Michael (Cooper) and Johnny (O’Connell) were strong all weekend and it could have gone Michael’s way just as easily for points.

“But that’s what PWC is about. It’s a long championship with doubleheaders every weekend and you have to fight for points every single race. Those first few laps are certainly really tight racing. That’s where staying out of the mix and qualifying up front is so important on a track like this. It’s so high-speed and there’s a lot of dirty air and having track position is a huge thing when straight-line speeds are so close among all of us.

“That was a memorable victory. We could’ve been fifth or first today. The start was the game changer for us, then my job was to run absolute qualifying laps amongst all of the stoppages of red flags and yellows. We improved the car from yesterday and made some big swings, which is not always the way we tune, but I trusted John Wright and Bobby Viglione’s direction and it paid off. It was a huge points week.”

James Sofronas on his race 2 victory -

“The Porsche 911 GT3 R was running great. It actually wasn’t as good as yesterday but you have to pick your battles. I saw (Michael) Schein go out which is a bummer. I feel bad for him, but then I decided to just back it down get the points and just save the car. At this point, it’s about a GTA Sprint point championship, trying to do the best we can.”

The points totals from this weekend have not yet been made official by the series, but the overall GT standings are currently tied at 183 points between Pat Long and Cadillac's Michael Cooper, who had a 10-point lead at the start of the weekend.