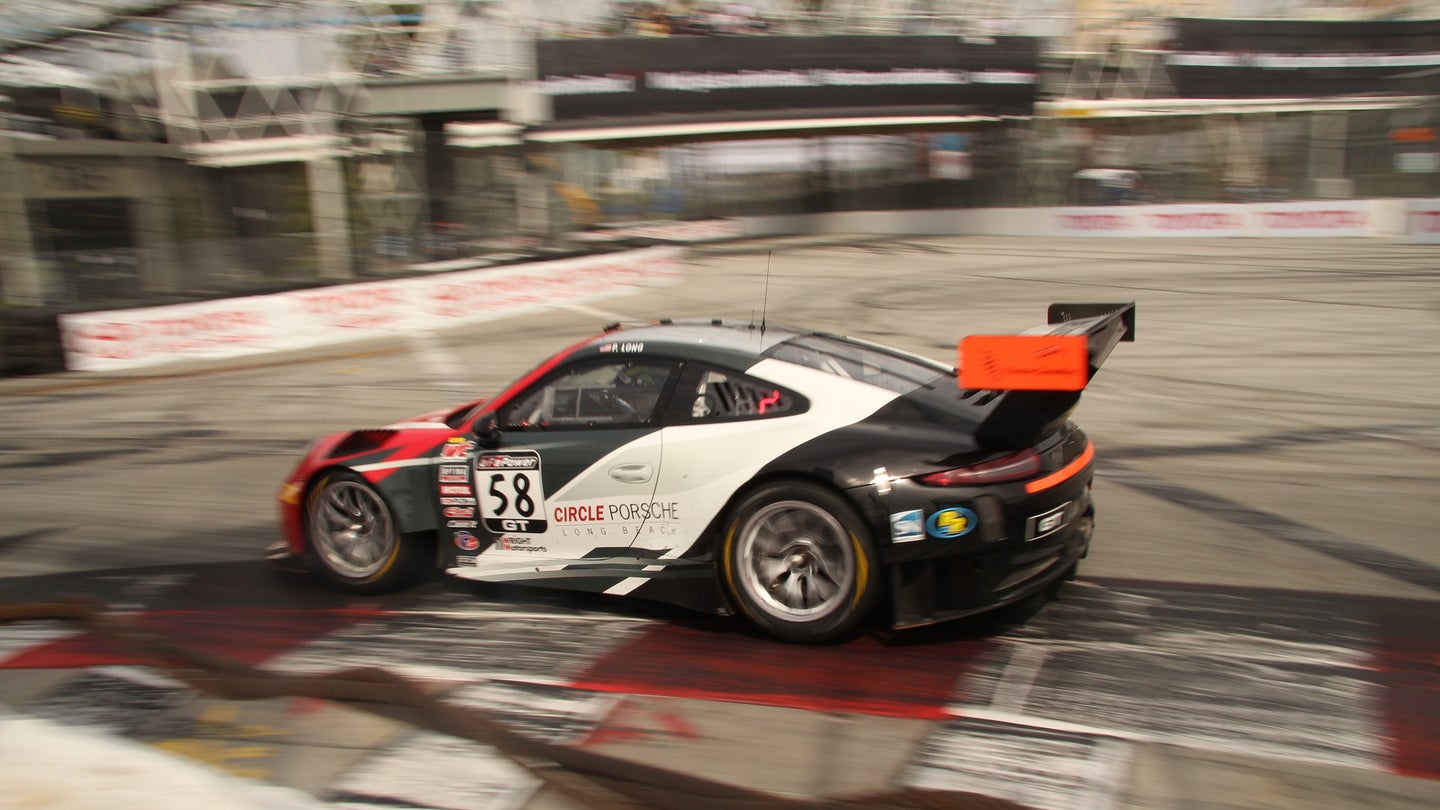 McLaren's Alvaro Parente took the lead in the Pirelli World Championship points standings from Porsche's Pat Long by a single point with a win this morning at Long Beach. Patrick's #58 Wright Motorsports 911 GT3 R was running great for the full 50-minute sprint race, but was hampered in his chances by a series of full-course yellow flag periods. Pat's front bumper was tucked up under Alvaro's rear bumper pretty much every corner of every lap, but he couldn't quite make it up into the lead.

Pat had qualified second to Parente's pole position by just over a tenth of a second, and it could be said that this insubstantial gap in one-lap pace is what decided the race. We asked Pat if he was happy with his second place qualifying position, and he replied that he was, of course, not happy, but was confident in the team, the car, and the driver. Long Beach is a notoriously difficult circuit on which to mount a pass. It is even more difficult to mount a charge when the two cars dicing have such similar pace and driver talents.

Parente and Long took the 2016 Pirelli World Championship title fight down to the very last lap of the very last race of the season last year, and it looks to be shaping up to be more of the same in 2017 after just three rounds. It was clear from the trackside that Parente's car was much better on restarts than Long's car was, jumping out to an impressive lead whenever the circuit went back green. Within a couple laps, however, Pat would crawl back up to Alvaro's rear bumper through turn 1.

The 50-minute race was bizarrely halted for 15 minutes as a fire hydrant exploded uphill from the track, dumping a river of water across the back straight between turns 8 and 9. The Long Beach Fire Department responded quickly to get the water shut off, and the safety crew did a good job of clearing the circuit after it went to red flag conditions. It was possibly the most bizarre thing we've ever seen at a race, however.

Alvaro Parente of his victory:

“The closest moment with Patrick (Long) was at the start, in the first braking area. There was respect with everyone, Bryan (Sellers) was there also in the back and tried to go inside but I was able to keep my position, even though that was all very close. I had a great car in my hands, my team and McLaren GT did a great job, and I’m happy to be back on the top step today.”

“It was probably twenty feet of running water and with slick tires at 140 m.p.h. that’s not what you want to see. It’s one of those situations where you sort of just stay calm, sort of relax, and let it end. I’m happy we didn’t have an incident and everyone responded really well, so hats off to the track and World Challenge series for their handling of an unnatural disaster. But, that’s Long Beach and that’s street racing. This series is about sprint racing and everybody’s racing hard. At the front, there’s a lot of respect; it’s hard racing but we can all grow together and keep a good show for the fans so I’m excited to represent Porsche in PWC in the GT3 R.”