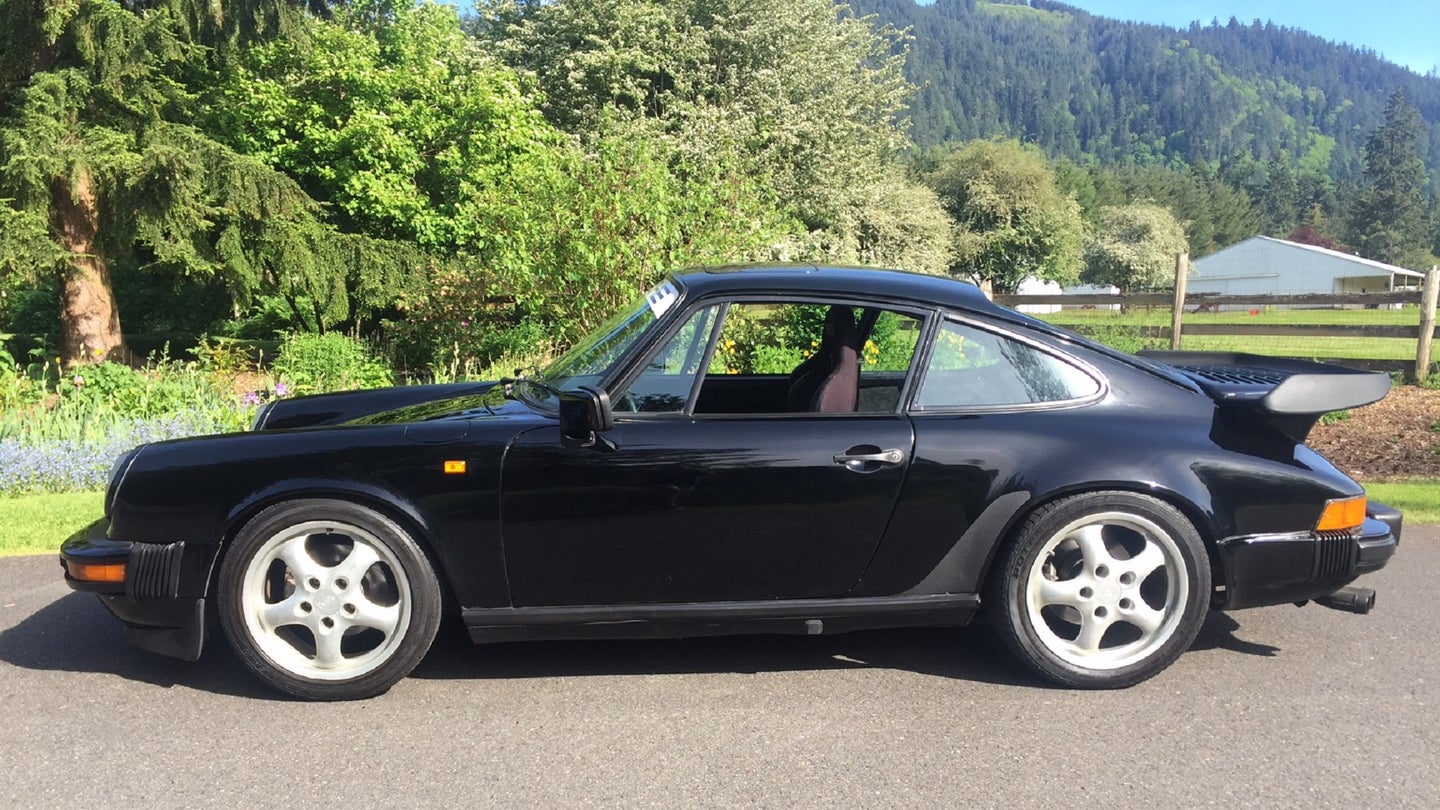 Porsche began enhancing their 911 models with power-adding turbochargers beginning in 1976 with a 3-liter flat-six engine, then bumping that up to 3.3 liters which carried on largely unchanged for later models through the early 1990s. No matter the displacement, the turbocharged engine hung way out the back of the car provided a harrowing driving experience with guaranteed white knuckles in the corners and praying to Jesus on the straight sections. This was not a car for normal automobile operators to simply step into and go quickly. With all of that power on tap, and with turbo lag being what it is, Porsche tried to quell oversteer by providing the car with a wider stance, and wider tires. Huge fender flares visually separate the Turbo from standard 911s of the same era.

This car, then, throws all of that out the window. What started life as a standard 911 SC still looks basically like a standard 204-horsepower 911 SC aside from a set of later 964 "cup" wheels and a Turbo model's whale tail spoiler on the engine lid. You'd be forgiven for thinking that this particular Porsche wasn't anything but a visually modified otherwise-stock SC. It is hiding something a bit special, however - boost and lots of it. Back in 2012 this car was delivered to John Walker's shop in Seattle for a heart transplant, installing an otherwise unmodified 54k-mile 300-horsepower 3.3-liter turbo engine. When you add nearly 100 horsepower to a car, almost a 50% increase, you're going to be pleasantly surprised by the end result. The seller of this car has put 20,000 miles on the odometer since the swap was carried out.

The new engine is mated to the SC's original type-915 gearbox, which is an interesting choice. Porsche, in the 70s and 80s, chose to essentially delete first gear from the 915 for use in the 930, as it was far too short for the big-power engine. As such, it's likely that this car would respond best to starting off in second gear, though we don't know that to be a fact. Similarly, this car does not have use of the 930's widened fender flares or wider wheel and tire package, so we're betting this car would be even trickier to drive quickly than a standard 911 Turbo, which already has earned the nickname of "Doctor Killer" or "Widow Maker". If you're game for the challenge, the car is currently for sale on Bring A Trailer. We don't expect the current bid of just over fifteen grand to stand for long, and would not be too surprised if this car racked up a sixty-grand winning bid. Whoever takes this home is in for a wild ride. For more photos and information, or to place a bid, check out the full listing here.