At last, an electric Mercedes that isn’t weird to look at. 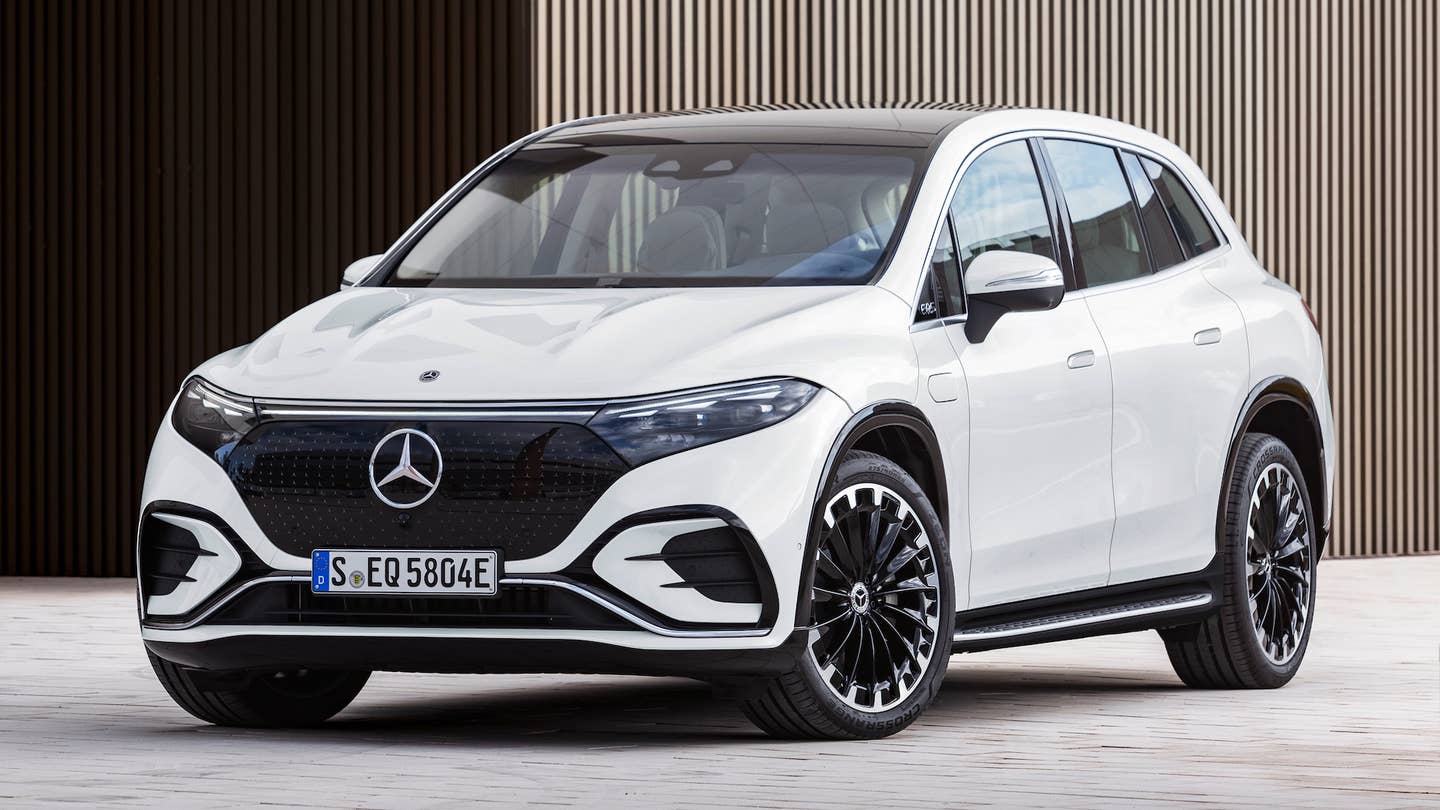 You've surely heard of the Mercedes EQS and EQE electric sedans, now get ready for the 2023 Mercedes-Benz EQS SUV, essentially an EQS on stilts, as its name suggests. Taking the fight to the Tesla Model X and BMW's iX, the EQS SUV will be the first electric SUV from Mercedes to be sold here in the U.S. Given its body style, something tells me this thing will sell better than its sedan counterpart and, at first glance, it seems to look a lot better too.

Much like its sedan counterpart, the EQS SUV will be available as a single-motor, rear-drive 450+ or as a dual-motor all-wheel-drive 580. The 450+ is good for 355 horsepower and 419 pound-feet of torque while the 580 produces a total 536 hp and 633 pound-feet. Zero to 60 mph times and top speed are currently TBA. With a 12-cell lithium-ion battery pack onboard, EPA range is also TBA but Mercedes says the EQS SUV will be able to travel more than 373 miles on Europe's WLTP cycle.

Plugging either model of EQS SUV into a DC fast charger, a max charging capacity of 200 kW can get the vehicle from 10 to 80 percent juice in 31 mins in ideal conditions (apparently equating to a possible 186 miles recouped in 15 mins) while Level 2, 9.6-kW AC charging can get it from 10 to 100 percent charge in 11.25 hours. Customers will get two years of free 30-minute charges on the Electrify America network.

This electric rig's status as an SUV-ified EQS appears to be apt because it boasts the same 126-inch wheelbase as that sedan but is 7.8 inches taller. Air suspension with adaptive dampers can raise the SUV by up to an inch. In addition to the standard Eco, Comfort, Sport, and Individual modes, an Offroad drive mode is selectable in the EQS 580 SUV. Offroad mode raises the car by 25 mm and flattens the accelerator response curve, allowing the vehicle to be able to deal with "light terrain." As another tick on the SUV checklist, an optional running board apparently inspired by Formula 1 car underbodies is said to actually improve aerodynamics, not hinder it.

Just like the EQS sedan, this SUV gets the full 10 degrees of rear-wheel steering as standard in the U.S. market. In addition to making it drive smaller at low speeds—the function cuts the turning circle down to 36 feet from a would-be 39 feet—it also effectively extends the wheelbase and improves handling at higher speeds, turning in tandem with the front wheels above 31 mph.

In terms of style, the lifted-EQS theme continues, sporting much of the same design as the sedan but grafted onto a more upright SUV shape. In my eyes, the EQS SUV looks a lot better than the sedan mainly because it nixes that car's main aesthetic oddity: the weird jellybean shape. In SUV form, it's a lot more conventional-looking. Nondescript, even. Frankly, I don't hate it at all. It's certainly more attractive on the outside than its Bavarian rival although that's not really saying much.

On the inside, things will feel supremely familiar to anyone who's spent time in the EQS sedan. It's dominated by the same Hyperscreen dashboard—one continuous piece of glass that encompasses three screens: a 12.3-inch instrument display, a 17.7-inch center infotainment unit, and another 12.3-incher in front of the passenger seat. This setup is standard on the 580 but optional on the 450+ and, as I learned from my first drive of the EQS sedan, not nearly as intimidating to use as it might seem. Base 450+ cars will get a S-Class-style 12.8-inch touchscreen rising up in the center and a separate 12.3-inch instrument display. The EQS SUV will seat five as standard but a third row can be optioned in, bumping seating capacity up to seven.

This being an S-level Merc at the end of the day, there's no shortage of boast-worthy comfort and tech features. Burmester 3D audio is standard and can spit out the same EV soundscapes from the sedan: Silver Waves, Vivid Flux, and the OTA-downloadable Roaring Pulse. Active distance assist with lane keep can slow down for curves, toll booths, and exits as anticipated by the built-in nav system. Wireless Apple CarPlay, wireless charging, and six USB-C ports keep occupants connected to the outside world while a standard pano roof and optional HEPA cabin air filter system let the sunlight in while keeping dirty air out.

Pricing for the 2023 Mercedes-Benz EQS SUV has yet to be announced but the vehicle will be produced in Tuscaloosa, Alabama on the same line as the gas-powered GLE and GLS, believe it or not. Its batteries, meanwhile, will be produced in MB's recently-opened battery facility in Bibb County, the existence of which is apparently creating 600 jobs.

Got a tip or question for the author about the EQS SUV? You can reach them here: chris.tsui@thedrive.com