The gesture raises questions as to how the driver was allowed to compete amidst current sanctions against Russia. 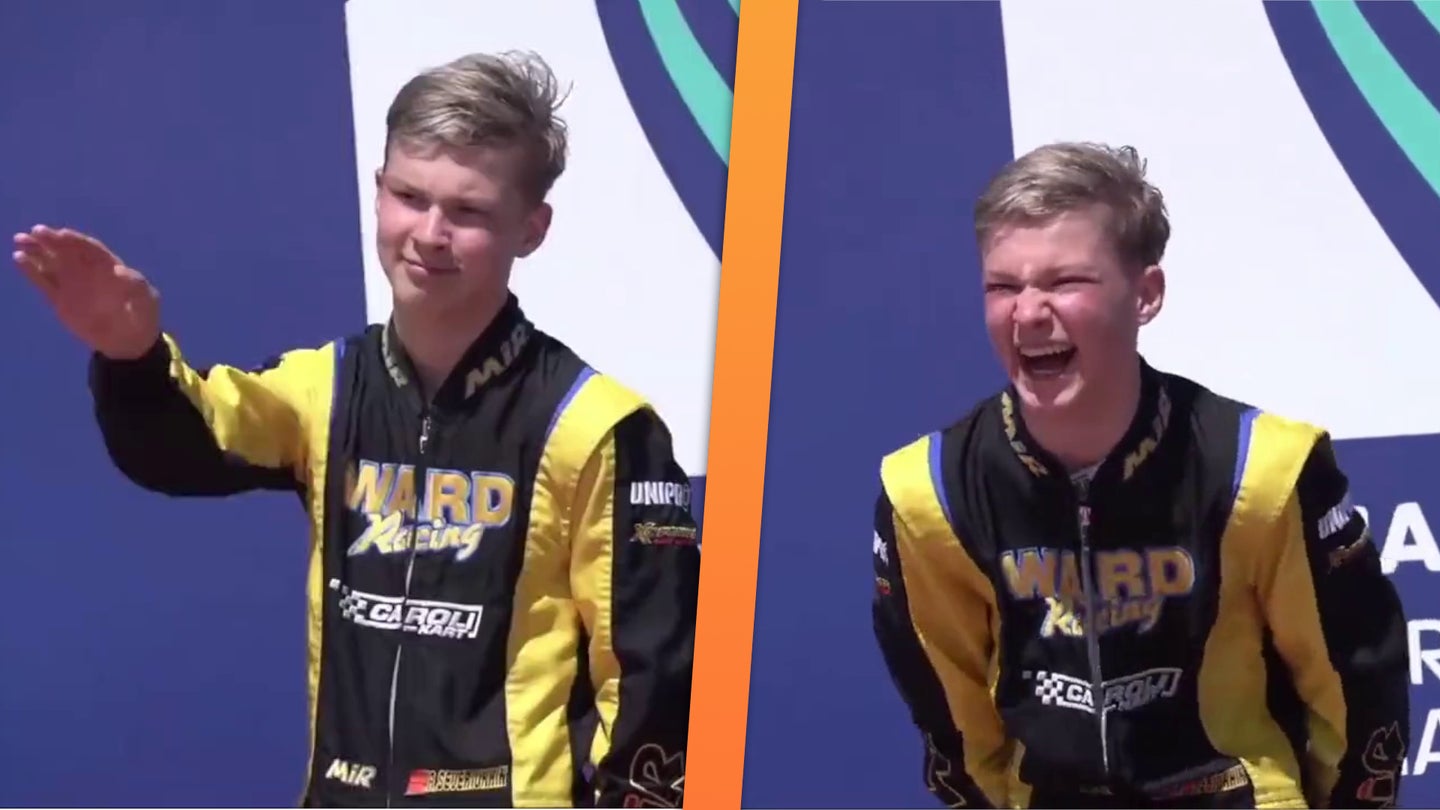 The European Junior Karting Championships in Portugal played host to ugly scenes as Russian karting driver Artem Severiukhin performed a Nazi salute on the podium yesterday, as reported by the Daily Mail. The move drew swift condemnation and resulted in Severiukhin's sacking with immediate effect.

Severiukhin raced in the European Karting Championship with Swedish team Ward Racing. The 15-year-old competed under the Italian flag to circumvent current sanctions that outlaw competitors racing under the Russian bannerdue to the ongoing invasion of Ukraine. It is unclear how Severiukhin was able to compete under the Italian flag; The Drive has reached out to the FIA regarding this and will update accordingly.

After winning first place in the 11-15 race in Portugal, Severiukhin beat his chest twice before raising his arm with an open palm, before bursting into hysterical laughter on the podium. Ward Racing sacked Severiukhin in the immediate aftermath, condemning the racer in "the strongest possible terms" and noting it was "in shame" regarding the gesture. In a statement, the team noted that "On the basis of these considerations, Ward Racing sees no possibility for continued cooperation with Artem Severiukhin and will proceed with terminating his racing contract."

The FIA indicated to the Daily Mail that it would not provide direct comment on the incident at this time. However, the motorsports organization has released a statement indicating it is undertaking an immediate investigation and will release more information shortly regarding the steps taken in the case.

That the fascist gesture drew anger and condemnation is no surprise; however, it comes at a particularly fraught time amidst the violence and war crimes perpetrated by Russian forces in Ukraine. It bears noting as well that Severiukhin is not the first Russian sportsperson to draw attention for such behavior this year. Gymnast Ivan Kuliak wore the "Z" symbol of the Russian invasion in a world championship event last month, and now faces a lengthy ban for his actions.

Severiukhin issued an apology on Instagram, in which the driver claimed that the gesture was not intended to be a Nazi salute. "This is not true," said Severiukhin, adding that "I have never supported Nazism and consider it one of the worst crimes against humanity.”

The fascist salute, whether intended as a symbol of the Nazi Third Reich or, as the Russian driver claims, as an Italian gesture known as the "Roman" salute, is a symbol that carries connotations of violence, genocide, and oppression. The gesture has been illegal to perform in public in Italy since 1952 as the country moved away from its fascist past in the early 20th century.

The reasoning behind Severiukhin's gesture is difficult to parse. While a symbol of violence and oppression could be seen as supporting the Russian invasion of Ukraine, a Nazi salute is a curious choice given the bogus Russian claims that the war is a "de-Nazification" effort. In any case, in quotes originally posted by Motorsport.com and since shared by Fox Sports, the driver stated "I’m from Russia. I thanked the team and my relatives from Russia. Someone saw a bad gesture in my actions, but it’s not. I just thanked them. I am Russian, I am from Russia and I stand by my country."

Ward Racing clearly perceived a link to the war, however, as per a statement the team posted to Instagram. "Ward Racing stands with the international community condemning Russia's invasion of Ukraine," the team said, going on to note that it has supported its "No War" stance with stickers and helmet designs since the invasion began earlier this year.

The team also notes it has three Ukrainian families traveling with the outfit at present, as they currently have no safe home to go to due to the invasion. The team closes out its statement indicating its support of a more respectful racing climate, adding that "Ward Racing would like to apologize to those who were hurt or distressed by the occurrence."

The peaceful world has little patience for fascist gestures and ideals at the best of times. With a violent war once more occurring on European soil, and with Ukrainian authorities reporting horrific atrocities in areas liberated thus far, few will countenance such behavior on the public stage. Incidents like this serve as sage justification for sanctions banning Russian competitors during the country's invasion of Ukraine.