The contraption does 0-60 in five seconds—that is, zero to sixty feet, straight up a tree. 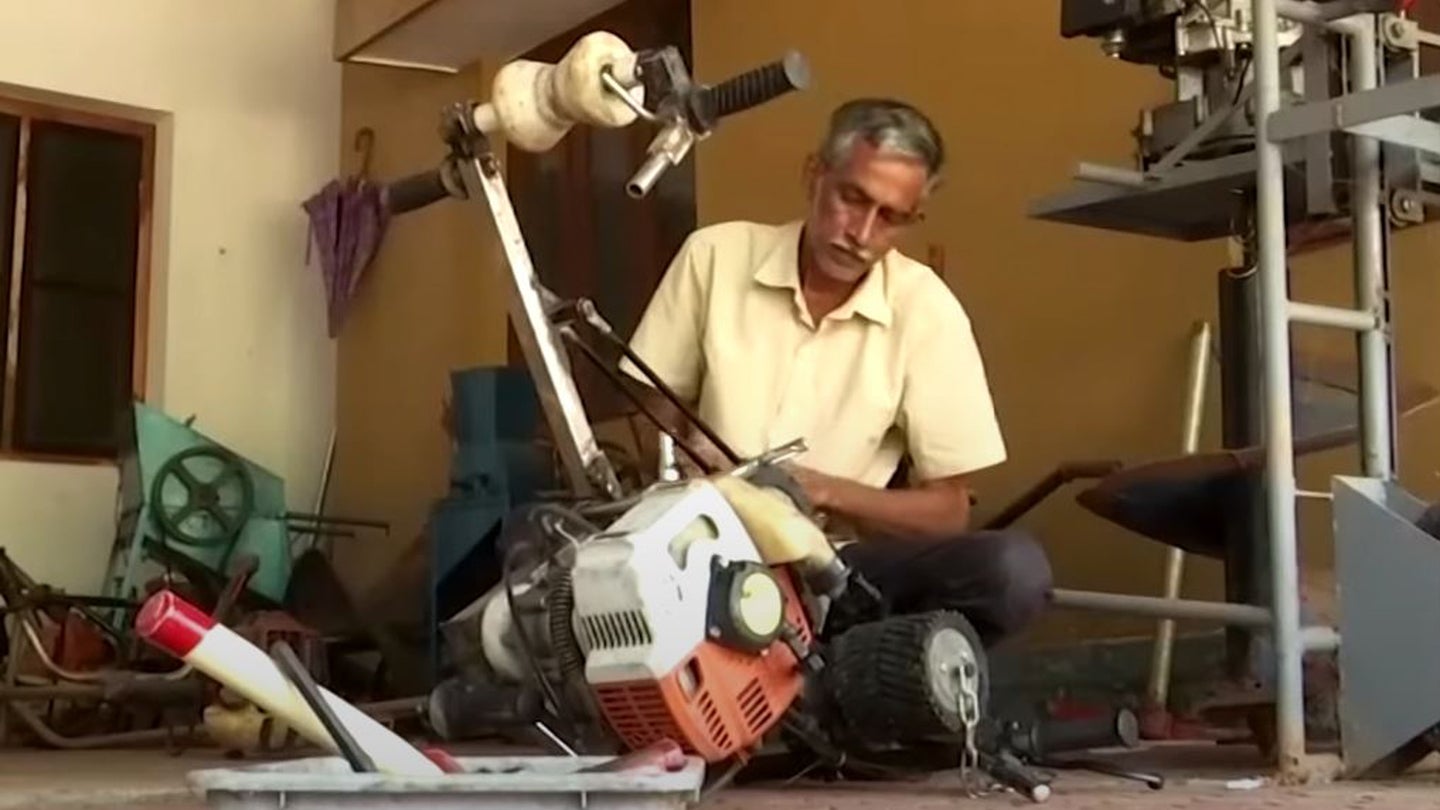 Farming is all too often underappreciated. While we take the massive tractors and harvesters of the modern age for granted, there are still some fields where mechanization and its efficiencies are a lot harder to take advantage of. For example, in India, the areca nut—known colloquially as the betel nut—grows on towering areca palm trees that ordinarily have to be manually scaled to harvest the seed. Ganapathi Bhat, a farmer with his own areca nut farm in Mangalaru, India, has invented what I can only describe as a "contraption" to make the process more efficient.

The tree-scaling device, shown working in this video from Turkish news outlet TRT World, uses what appears to be a small industrial motor similar to a chainsaw or scooter, connected to a set of wheels that grip the trees. A handlebar-mounted throttle controls descent and ascent speed, and the "driver" rides on a small bicycle seat (complete with a seatbelt, which is a nice concession to the heights in play). The scooter does not have a traditional zero-to-sixty speed, of course, but Bhat claims it can do 0-60 feet vertically in about five seconds.

The areca nut is harvested primarily in India, with nearly one million tons collected yearly in the country. The trees themselves are challenging to scale, as they can grow over 60 feet in height, but have an average trunk diameter of a paltry 4 to 6 inches, which is even more difficult to climb in heavy rains when the trunks are wet. Bhat said in an interview that "villagers asked me if I was mad. They had doubts about my invention... whether it would work in the rainy season because the trees would be slippery," but it does appear to work. Bhat invested over $50,000 in the project, which he began as he found himself unable to climb the trees of his 18-acre farm as he got older. The farmer has seen a roughly threefold increase in harvesting efficiency using the machine versus without it.

Bhat, for his part, seems proud of the device. "I feel that my life is complete now" was his direct phrase in an interview, although he's apparently already begun a second spin-off tree-climber meant for the wider trunks of coconut trees. Regardless of his future projects, it's always fascinating to see homemade projects making people's lives easier.

Tractor Stunting Is One Wild Slice of Automotive Culture

Numbers aren’t everything—but neither is a compact tractor. We tested the limits of John Deere’s latest.