It’s got 437 hp, 583 lb-ft of torque, and Fox internal bypass shocks as standard. But there’s more to it than that. 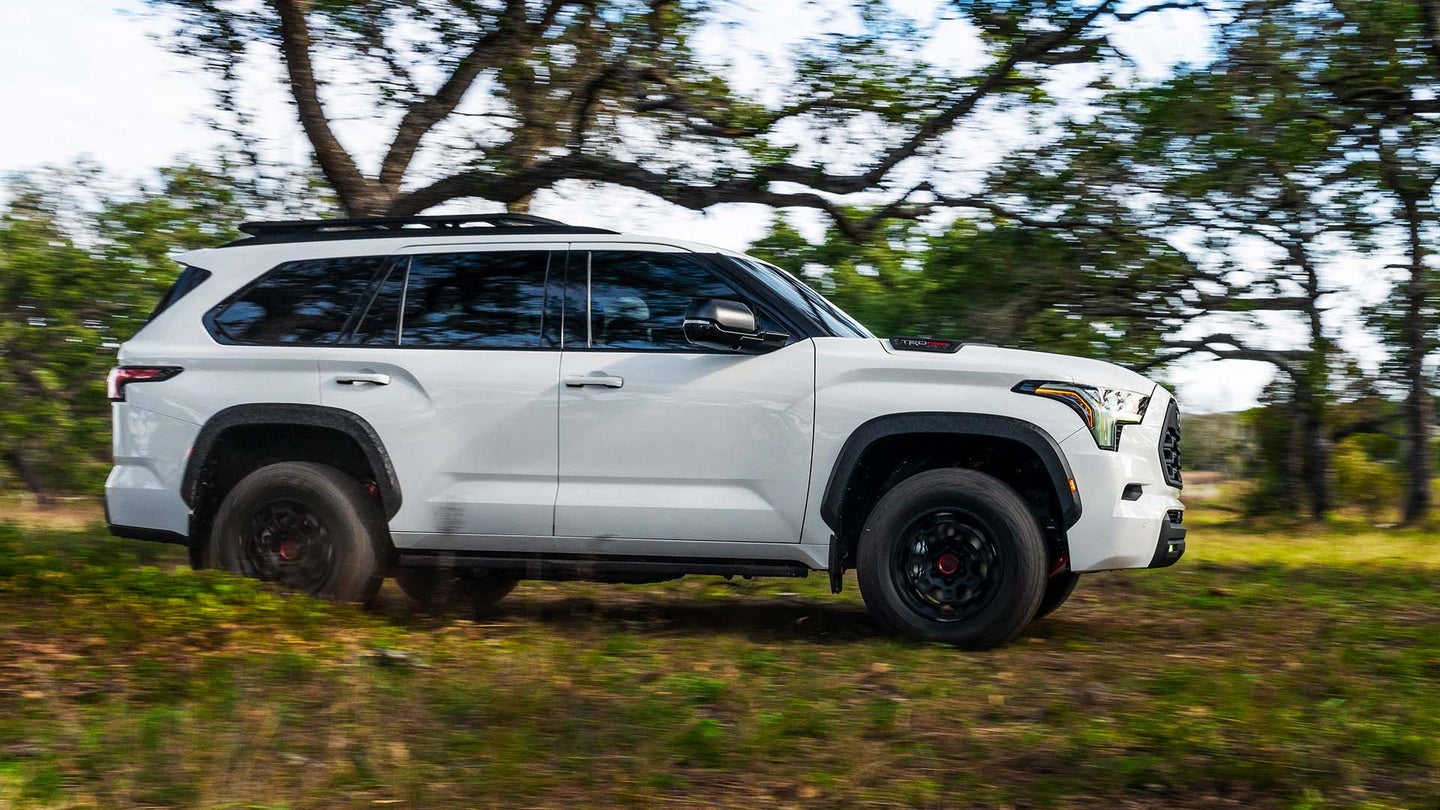 I've yet to meet an off-road junkie who doesn't have some reverence for the Toyota Land Cruiser. New or old, some model somewhere along the line has wedged its way into the hearts of anybody who's ever dropped a transfer case into 4LO on purpose. But the legendary off-roader is now gone from the United States, though, and since the 300 Series Land Cruiser was launched internationally last summer, we've felt left out. That's what the 2023 Toyota Sequoia TRD Pro is here to remedy.

Topline stats are huge: 437 horsepower and 583 pound-feet of torque from a twin-turbo V6 hybrid engine. That stout powertrain is actually standard on all 2023 Sequoias, from the relatively basic SR5 to the flagship Capstone luxury model. It boasts more goodies within the TRD Pro, however, like a locking rear differential—none of the previous-gen Sequoias had that, and neither did the Tundras. Meanwhile, the Land Cruiser has no hybrid option and instead makes do with less: 409 hp and 480 pound-feet.

That's a point in the Sequoia's favor then. Move on to the platform and you'll notice plenty in common; both models are body-on-frame and ride atop Toyota's TNGA-F architecture. They've got fully boxed steel frames, which is all but essential for four-wheeling SUVs, although the Sequoia has always been bigger overall. Greater size isn't really a plus for off-roading, but this is America; we're always asking for more legroom. Toyota isn't announcing the Sequoia's dimensions just yet, though a spokesperson did tell me it's a little more compact than a Tundra.

The suspension that underpins the Sequoia TRD Pro is noteworthy, too. The multi-link rear coil spring setup is complimented by Fox internal bypass shocks, ones that aren't available on the global-market Land Cruiser. That's not to say the 300 Series is a slouch on tricky trails—we all know that isn't the case—though this new Sequoia is really making a case for itself as a solid truck for enthusiasts.

The Sequoia also receives the same updated versions of Crawl Control and Downhill Assist Control that we've already tested in the Tundra TRD Pro, which are leaps and bounds ahead of the systems they replace. Inputs from the truck are smooth and they do their job more effectively, helping the driver to focus on choosing their line rather than managing throttle and braking input. Multi-Terrain Select also helps the Sequoia TRD Pro maintain traction and limit wheel spin, though it'd be great to see a feature like the Land Cruiser's Electronic Kinetic Dynamic Suspension System. That's essentially a network of hydraulics that can disable the anti-roll bars when needed for maximum suspension articulation. That thick red stabilizer bar has to be manually removed from the Sequoia TRD Pro.

Now, Toyota hasn't released towing figures for the TRD Pro yet, though we know at least one version of the 2023 Sequoia can manage 9,000 pounds. Don't expect the off-road model's listed max to be quite that high since off-road suspensions with more travel rarely lend themselves to huge towing numbers. Even still, it's likely to come in at a respectable figure. The high-performance four-wheeling Tundra, for reference, is less than 1,000 pounds short of the most capable spec when it comes to towing. The Tow Tech Package is also standard on Sequoia TRD Pro, which means everyone will have Trailer Backup Guide and Straight Path Assist, so that's reassuring.

Let's not forget the massive waiting list for a Land Cruiser, either. Recent reports claim some deliveries are four years out, and the Sequoia should be available this summer.

Mike Sweers is the Sequoia's executive chief engineer, and during the model's launch on Tuesday night he referred to it as the "second brother" of Toyota's TNGA-F platform. It slots between the Tundra, which is meant more for work, and the Land Cruiser, which is mainly dedicated to off-road performance.

The Sequoia seems to fit nicely in the middle with its emphasis on family-hauling as well as trail driving, particularly in TRD Pro trim. And knowing how seriously Sweers and his team take trucks, it's bound to be a great performer in the real world as well.

Battle of the full-size, truck-based SUVs.