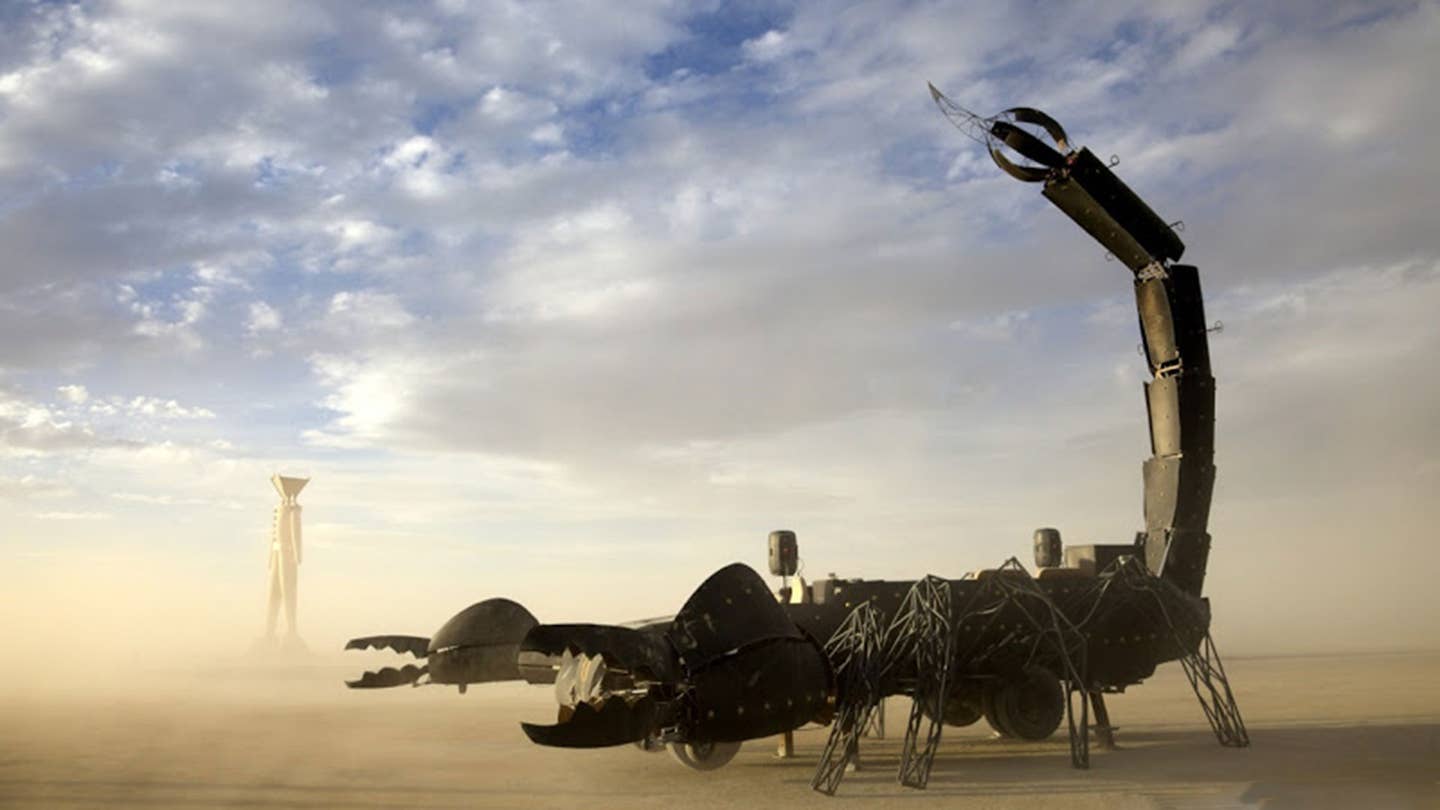 If you've ever had the startlingly specific dream of buying a 55-foot-long robotic scorpion built on a truck chassis that spews fire from a seven-barrel flamethrower in its tail...boy, is it your lucky day, or what. Because that's exactly what former NASA engineer Kirk Jellum has listed on eBay.

Jellum, who spent 12 years working on the Hubble-replacing James Webb Space Telescope, is an old hand at building laborate art cars, having retiring six years ago to spend all his time building them for Burning Man. The first project—a 40-foot-long praying mantis—was no slouch, but Jellum went bigger and badder with the second: the 55-foot-long, 45-foot-wide, 45-foot-high replica of a pet female emperor scorpion named “Fluffy” you see here. has seven computer-controlled flamethrowers in the articulated tail, 21 hydraulic actuators to make the tail, legs, and claws move like the real animal's body parts, and 150 LEDs, for the obligatory light show.

Jellum and his two-man building crew invested seven months creating Fluffy's duplicate. Assembled atop a 28-foot, 1991 International 4900 boom truck, Fluffy weighs 11,000 pounds and isn’t the slightest bit road legal. She folds down to smaller dimensions for travel—33-feet-long by 11.5-feet-wide by 11-feet-high—but you’ll still need a semi-trailer with oversized load accommodations if you want to take her home. Oh, you'll also need at least five friends, because the scorpion takes six people a day to set up—and just as long to tear down.

Jellum says there’s $225,000 invested in the project, but $50,000 will win the auction; compared to the BMW 3 Series Gran Turismo you could buy instead for that price, makes Fluffy seem like a no-brainer. Note, though, that you won’t just be getting a fire-spitting scorpion—you’re getting a rolling piece of art with miles and experiences under her wheels—er, claws. This arachnid has been to Burning Man every year since 2011; she’s been the focus of a feature-length documentary, fought a desert battle with a giant, fire-spouting octopus called El Pulpo, and even had a 40-person dinner party served inside her.

Rolling into the uncanny / tin-canny valley.

The Nissan Altima Will Make You Disappear

If anonymity is your thing, the Altima is your car.