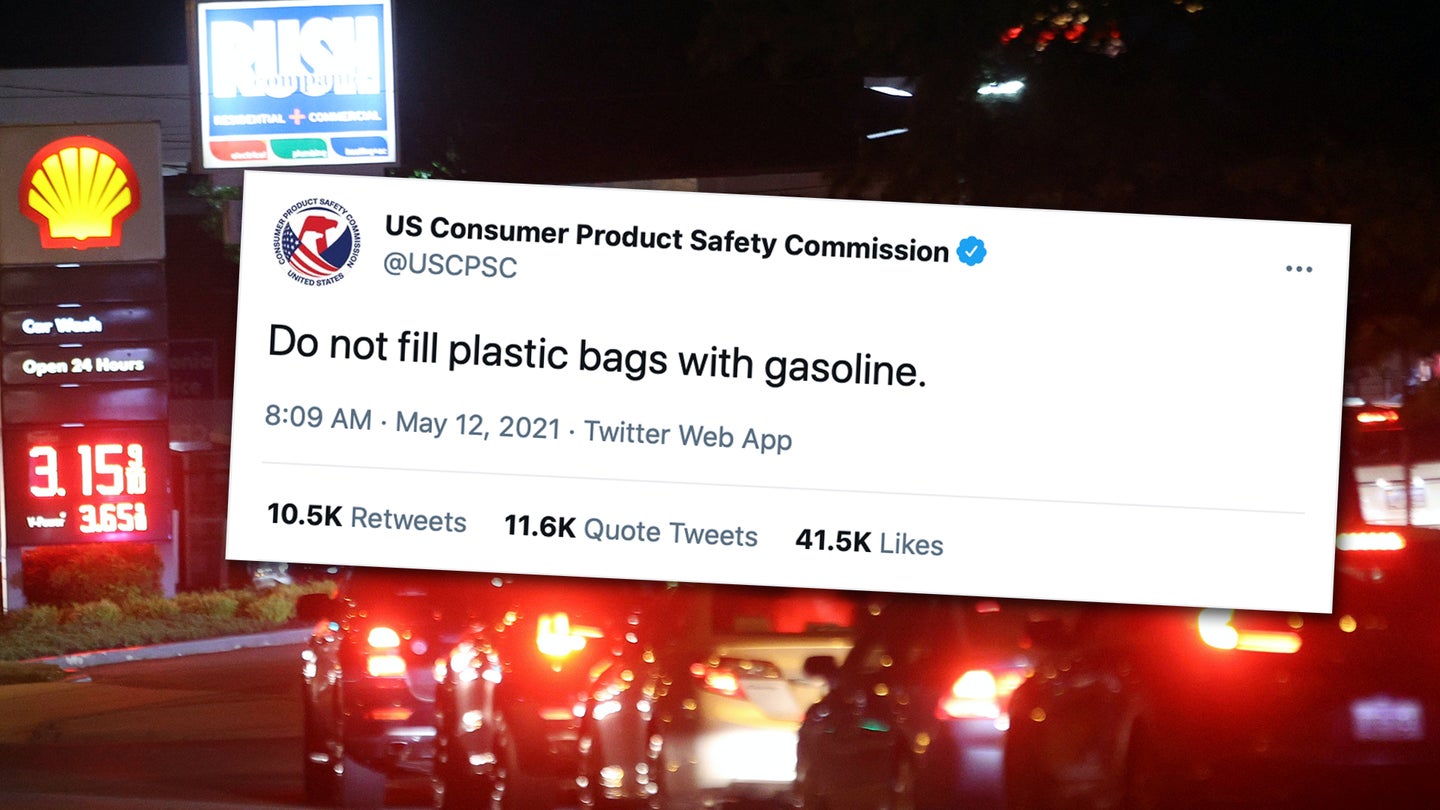 Another month, another consumer panic. This time, it's not one over toilet paper, but gasoline, with a ransomware attack leading to the shutdown of the Colonial Pipeline that supplies gas up and down the East Coast. While the responsible thing to do would be cut back on unnecessary trips, and carpool whenever possible, the entirely rational Free Market response has instead been to hoard gasoline in any and all containers on hand, whether or not they have lids. Yes, that even includes plastic bags—on Wednesday, the federal agency tasked with protecting consumers felt the need (like us) to remind people that this is a bad idea.

The United States Consumer Product Safety Commission, whose Twitter feed is typically a surreal yet wholesome display of product safety memes, broke character Wednesday morning to issue its straightforward plea, adding that Americans should "use only containers approved for fuel." Though the reason for the CPSC's statement isn't immediately apparent, it may have been issued in light of a resurfaced 2019 viral video, which depicted a driver filling her plastic grocery bags with fuel, as well as numerous reports that people have been seen trying it again this week.

In addition to their leaky nature and their inability to properly seal in fumes, plastic grocery bags filled with gas may also pose some risk of fire. Many grocery bags are made from polyethylenes; a material that Poly Processing says cannot properly ground static buildup, and therefore carries some risk of sparking. Of course, leave it in the bag long enough and depending on the bag's exact composition, the gas will just dissolve the plastic and spill everywhere.

So, while the more enterprising souls in your area may be a resourceful bunch with their Harbor Freight-powered trucks, do these blue-collar engineers a favor and speak up if you see them bagging their gas. I know my ex-Dr. Pepper syrup drum full of race gas is getting its label checked as soon as I get out to my garage.

And remember: though stations are currently running dry across the southeast, this is a supply chain problem caused by a pipeline shutting down, not an existential resource problem. In other words, there's plenty of fuel to go around in this country, just not enough ways to get it to the pump in affected states at the moment. Colonial Pipeline says full operations should be restored by the end of the week, with lingering shortages cleared up by early next week as the gas slowly makes its way (flow speed: 5 mph) through the 5,500-mile pipe. If you can wait until then for your next fill-up, do it.

To start, you don’t need to. And it’s gonna expire… if it doesn’t explode first.

The pace is certainly still there. Sadly, so are the lettuce and tomato.