It has an unusual look with the wheelie bars stabilizing the back end, and it’s quick. 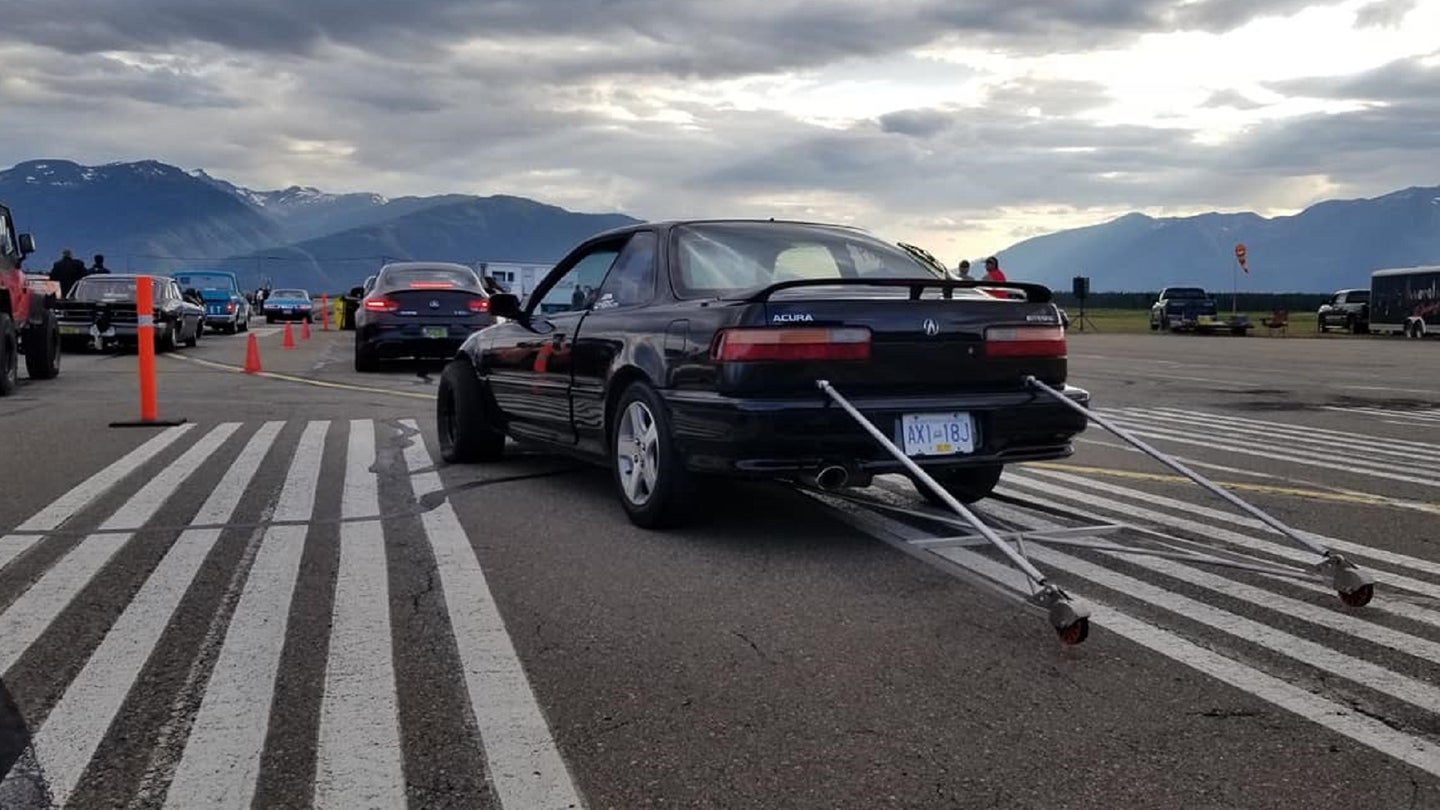 If you follow the coast of British Columbia, north of Vancouver, Canada, you’ll come across a tiny airport halfway to Glacier Bay National Park. The Terrace Drag Race Association operates at the Northwest Regional Airport Terrace-Kitimat, hosting races on one of two runways there. If you’re there, you might just run into Tyler Morton and his modified 1992 Acura Integra. And it might just smoke you off the line.

Morton bought his Integra GS-R in 2011 from a friend. The Acura had been his friend’s wife’s daily driver and family hauler and came with a well-worn B17 engine, a 160-hp 1.7-liter 4-cylinder VTEC with a five-speed manual transmission. The GS-R was somewhat rare in North America; only 5,000 of this model were made for the continent.

It needed a little work to make it a drag racing star. Morton decided on a non VTEC swap, a b18b1 with Wiseco pistons, Eagle rods, and Brian Crower cams, springs, and retainers. The low compression ratio of the b18b1 made it a good choice for a turbo, and he layered on a Holset he341 from a 2003 Dodge that was languishing in the garage of a friend of his. For racing, he runs the car on 24.5x13 MT slicks. An automotive tech by trade, Morton did all the work to the car himself, including the tuning, installation, transmission work, paint, and more.

The most interesting mod of this Integra is the addition of wheelie bars, which Morton told me is an old import racing idea that keeps the weight on the front end, preventing weight transfer. Another friend of his built the wheelie bars; he had used them on his Civic in the past. The wheelie bars dragging behind the Integra definitely add an unconventional look, but Morton says they shaved four-tenths off his 1/8 mile and helped to make his times extremely consistent, especially on the unprepped surface.

“Technology and prep on the track have come a long way and many people don't use them as much anymore, but they work perfectly for my setup,” Morton said. “I cut three-tenths of a second off my 60-foot run immediately after install.”

The Integra is currently in the middle of a revamp. Morton just installed a roll bar and uses the Acura as a street car when it’s not race season, which is generally five or six weekends a year for him.

“This car has taught me and helped me through a lot of things in life,” Morton says. “I just keep going faster and faster to prove myself at a track that's 99% muscle cars. I'm the only import in my region going this quick.”

Currently, this sleeper can do 100 mph in 660 feet and runs the 1/8 mile in 7.33 seconds. There’s a bigger turbo in the garage now, just waiting to be installed, so there’s more to come.