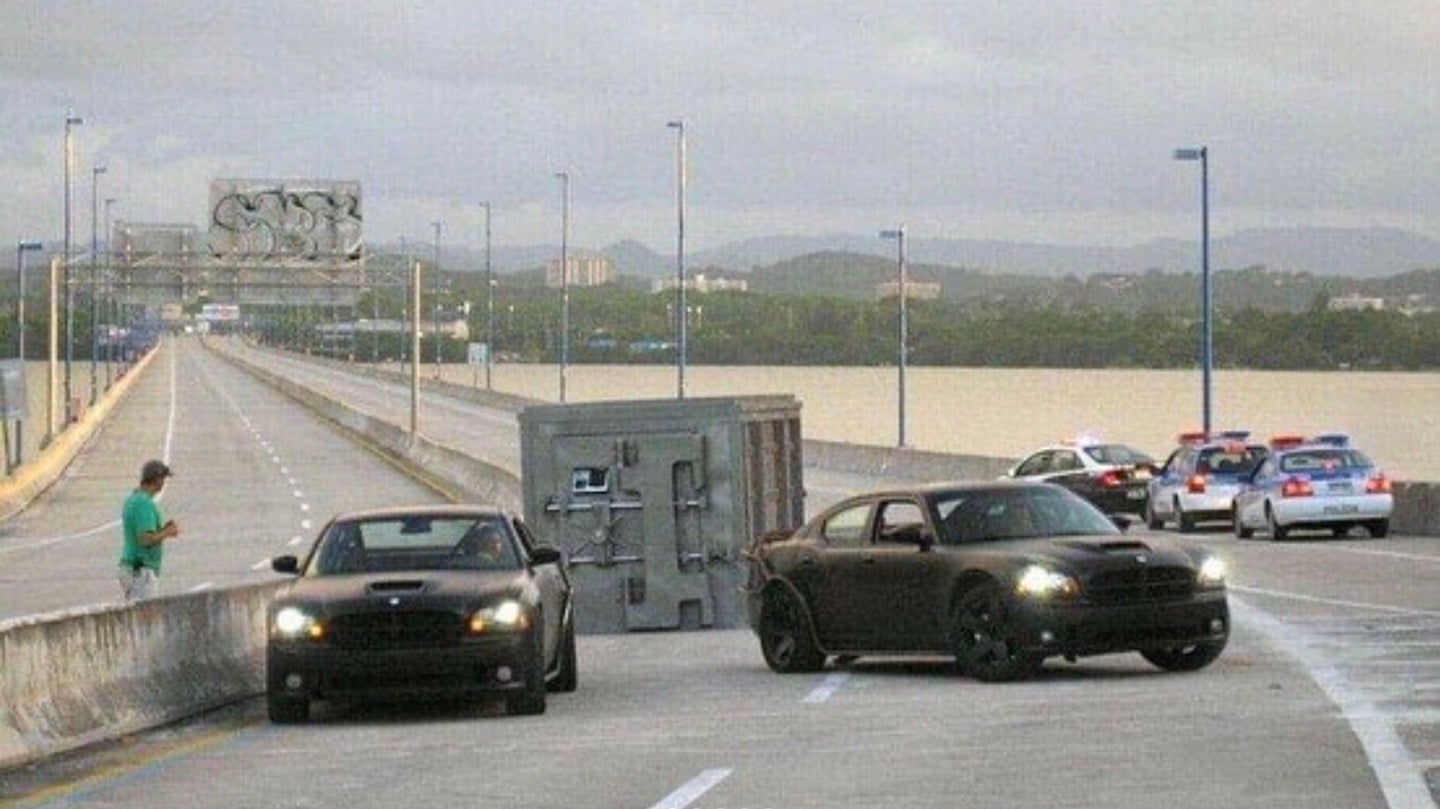 Remember that scene from Fast Five where Vin Diesel and Paul Walker steal a bank vault and tow it behind two Dodge Chargers? The scene is arguably one of the most iconic chase sequences in the entire Fast and Furious franchise, and took stunt coordinators countless hours of meticulous planning and fabrication to make it possible. However, there's something you probably didn't know: someone was actually driving one of the vaults from the inside.

As you might have guessed, the 10-minute scene resulted in quite a bit of planned demolition. In some shots the vault tumbled down the road and in others it smashed through a building and was being used as a makeshift wrecking ball. One size—or rather one vault—didn't fit all, so the stunt team behind the madness built multiple examples of seven different vaults to fit the needs of the movie.

Craig Lieberman, a technical advisor for the Fast and Furious franchise and the original owner of several movie cars, pointed out on Instagram that one of the vaults used in Fast Five was far from just a dead hunk of metal. His particular post shows off a different drivable vault car used in Fast and Furious Live, but it's a perfect example of just how necessary a drivable example of the vault was.

To make the vault chase scene in Fast Five work, the prop team chopped up a GM square body pickup (properly equipped with a manual transmission, mind you) and stuffed it inside a fake vault that would be used for at least one driving scene. The bed was cut off and a makeshift rear suspension affixed directly behind the cab. The tiny truck was then encased in box steel and metal plates welded around it.

As you might have guessed, a fully encased truck doesn't get much air flow. According to Jack Gill, one of Fast Five's stunt coordinators, this proved to be a huge problem to manage. The ambient air inside of the encased truck—which was already stripped down to a seat and steering wheel—reached 190 degrees, which Gill says caused the stunt driver, Henry Kingi, to nearly pass out.

Gill and his team came up with a crafty solution that involved lining the car with dry ice. But since dry ice isn't exactly something that plays well with humans inside of an enclosed space, the driver needed extra provisions to offset the frozen slabs of carbon dioxide used to keep the cabin cool. The stuntman was then supplied with a helmet that pulled in fresh air from outside of the contraption, enabling him to stay cool and alive.

As a surprise twist, this actually wasn't the only drivable vault featured in Fast Five. The props team also built a false vault around the front end of a semi truck for the vault ramming scene in the film—something you'd never notice due to clever cinematography and low camera angles.

It's hard to believe that the majority of the bank vault scene wasn't CGI, especially given how crafty Hollywood has been with special effects over the past decade. Who would have thought that the stunt team would actually pull a real 9,000 pound vault around the streets of Puerto Rico? Better yet, who would have thought that there was a pickup truck stuffed inside that metal cube?