Google Gets a Patent for Pedestrian Flypaper

Car hits pedestrian, pedestrian immediately sticks to car, things get complicated after that. 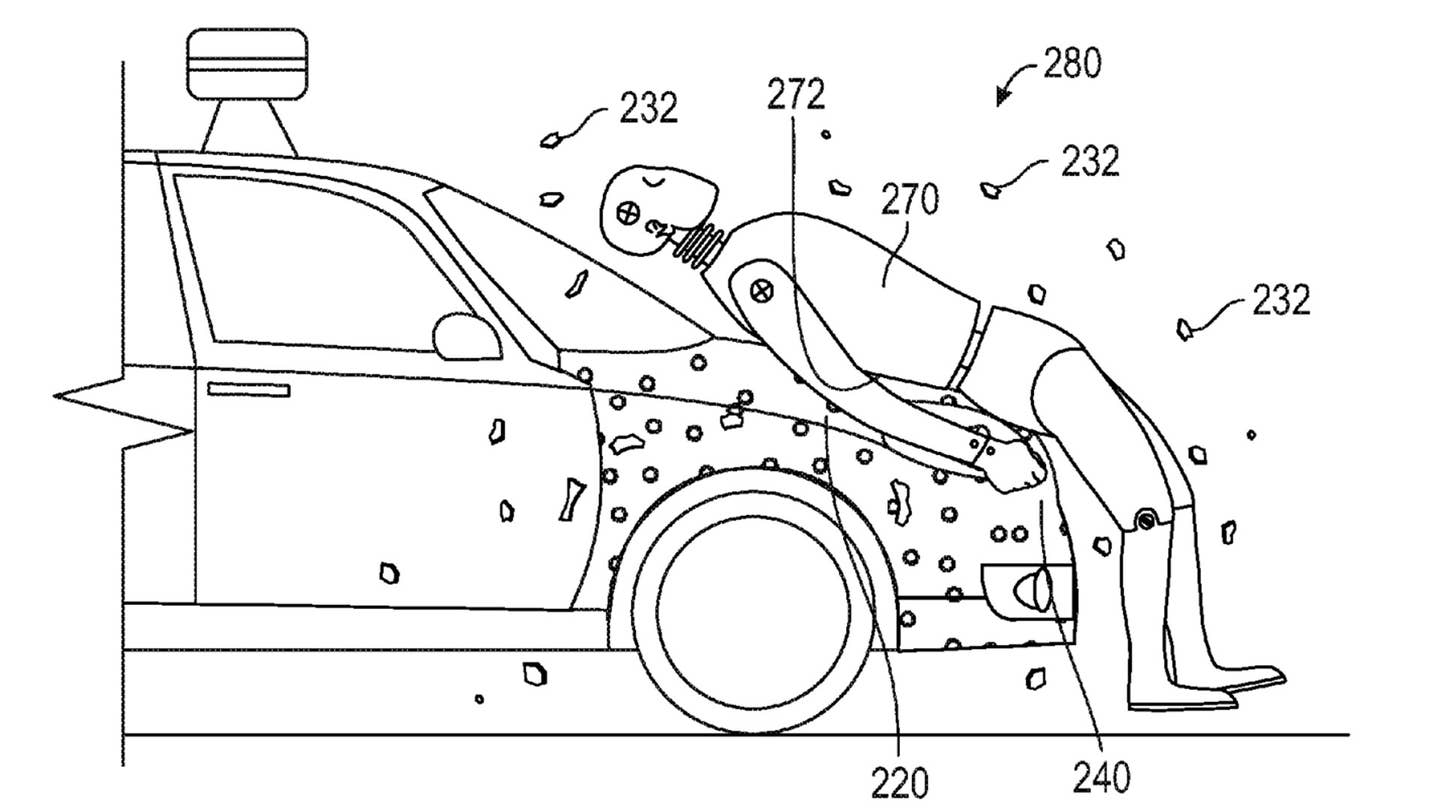 “Publish or perish” is the academic imperative. In tech, it’s “patent or perish.” Engineers are driven to get the US Patent and Trademark Office to bless the most fanciful creations, ones with nearly zero chance of becoming real. That’s how we get submissions for Hyundai’s folding electric car, Airbus’ wraparound airplane engines, and Mercedes’ vein-reading tech to unlock your car. And that’s how Google just scored with its “Adhesive vehicle front end for mitigation of secondary pedestrian impact,” which became patent number 9340178 just this week.

The innovation is conceived as a stopgap measure for autonomous vehicles that are, eventually, certain to hit a pedestrian or two. The patent envisages the hood and fenders of an autonomous car covered in a supremely sticky substance, which is itself covered by a non-sticky eggshell-like material. If a pedestrian gets hit, the impact with the car shatters the outer eggshell membrane and, in patent’s own words, “The adhesive bonds the pedestrian to the vehicle so that the pedestrian remains with the vehicle until it stops and is not thrown from the vehicle.” You read that correctly – the pedestrian is stuck to the car. For how long? The adhesive would let go “after a period of time.” Which is helpful.

The point is to keep a pedestrian from suffering more injury in a secondary impact, like hitting the windshield or being thrown to the ground, often after going airborne. It’s debatable whether this is the way to do it. Commentary on the patent has universally applauded Google for considering the safety of people outside the car, then gone on to wonder if taping people to the hood would cause more problems than it solves. If you get hit on the way to beach dressed in nothing but your trunks, well, good luck getting a hood off your back.

About the best that can be said for it is that it eliminates the chance of a hit-and-run, but we do see one other possible opportunity: the return of expressive car design. European pedestrian impact laws have turned vehicle fronts into slab-faced mush. If some fancy front fascia flypaper meant you didn’t need to worry about pedestrians getting hurt in a collision, maybe we could get back into the curvy, kinky stuff. A contemporary redux of the shark-nose BMW 635CSi wouldn’t be such a bad thing right about now.