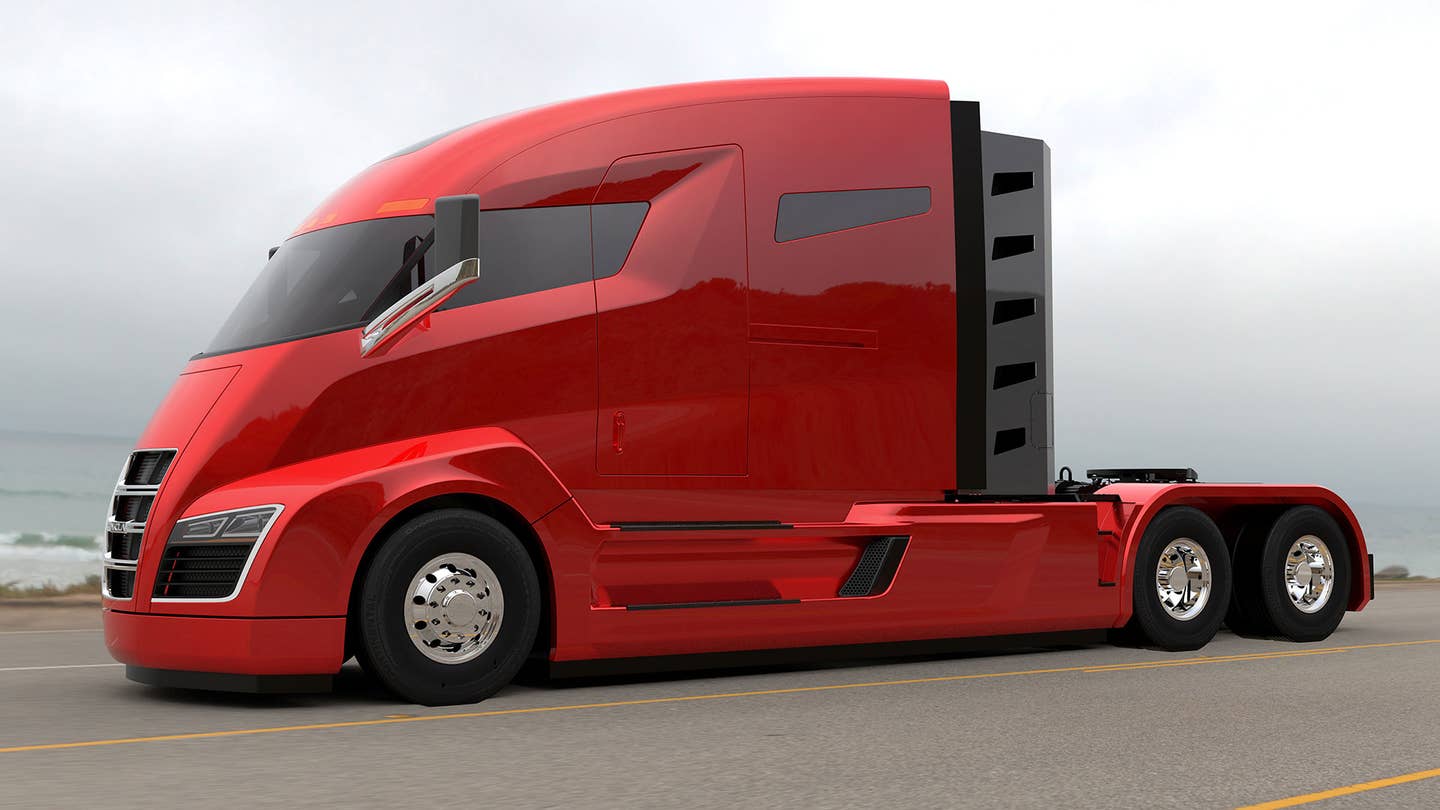 Nikola Motor Company (NMC) has been working on the Nikola One semi truck for three years in secret and is finally ready to go public. All we have at the moment are renderings, but if Nikola can get close to the claims it’s making, the world of long-haul trucks needs to prepare for revolution. The numbers are gob-stopping: a serial-hybrid Class 8 semi with 2,010 horsepower, more than 3,700 pound-feet of torque, a range beyond 1,200 miles, rated to pull a gross weight of 80,000-pounds. All that gumption comes from a 536-horsepower turbine charging a liquid-cooled, 320-kWh lithium-ion battery that powers six 335-hp electric motors – one at each wheel, every motor with dual gear reduction that blows max torque out to 86,000 lb-ft. For comparison to an existing rig, a brand new Kenworth T680 with a 12.9-liter Paccar MX-13 engine puts out 500 hp and 1,850 lb-ft. At six miles per gallon and hauling 270 gallons of diesel, the truck returns a 1,620-mile range.

The Nikola One loses out on driving distance because it employs a single 150-gallon fuel tank, but the claimed benefits more than make up for it. Nikola says the turbine can run on any fuel from natural gas to biodiesel, and a Class 2 DC charger can juice the battery directly. The company says the reduced fuel and maintenance costs (from having no transmission, for instance) can reduce a fleet operator’s bill by up to $30,000 a month for a single truck. An independent rear suspension based on a design by auto supplier Meritor means a smoother ride. The six-by-six powertrain means better traction, torque vectoring, and plenty of brake regeneration. And the company claims the Nikola One can haul its max load up a six percent grade at 65 miles per hour – the Kenworth would do about half that speed. But wait, there’s more: NMC plans to build out a nationwide network of compressed natural gas stations for Nikola One drivers and sell the CNG for $1.50 per gallon.

Of course, there’s a catch: the Nikola One will start at $375,000, significantly more than a new Class 8 sleeper semi. But you could make that money back by putting down a $1,500 refundable deposit right now, because the first 5,000 reservations will get 100,000 gallons of CNG free once they buy the truck. That’s enough for about one million miles of driving, or $335,000 of $2 diesel for that Kenworth T680. It’s also a fantastic deal, assuming the Nikola One and the nationwide CNG network ever get built.

On the plus side, the technology inside the Nikola One is already employed elsewhere. Diesel-electric locomotives use a similar serial hybrid setup, without the turbines. Wrightspeed, the company established by Tesla Motors co-founder Ian Wright, uses a multi-fuel turbine in its serial hybrid heavy duty truck powertrains. And NMC CEO Trevor Milton formerly ran dHybrid, a natural gas storage technologies company that provides the fuel tank for the Nikola One. Milton says NMC is backed by wealthy investors and the company owns its own CNG wells, but there’s a long way – and a galaxy of money – between a great idea on paper and establishing a viable semi truck manufacturer.

According to Milton, a prototype Nikola One goes on public display later this year, production commences in 18 to 24 months. Over-the-road truckers? Cross your fingers.