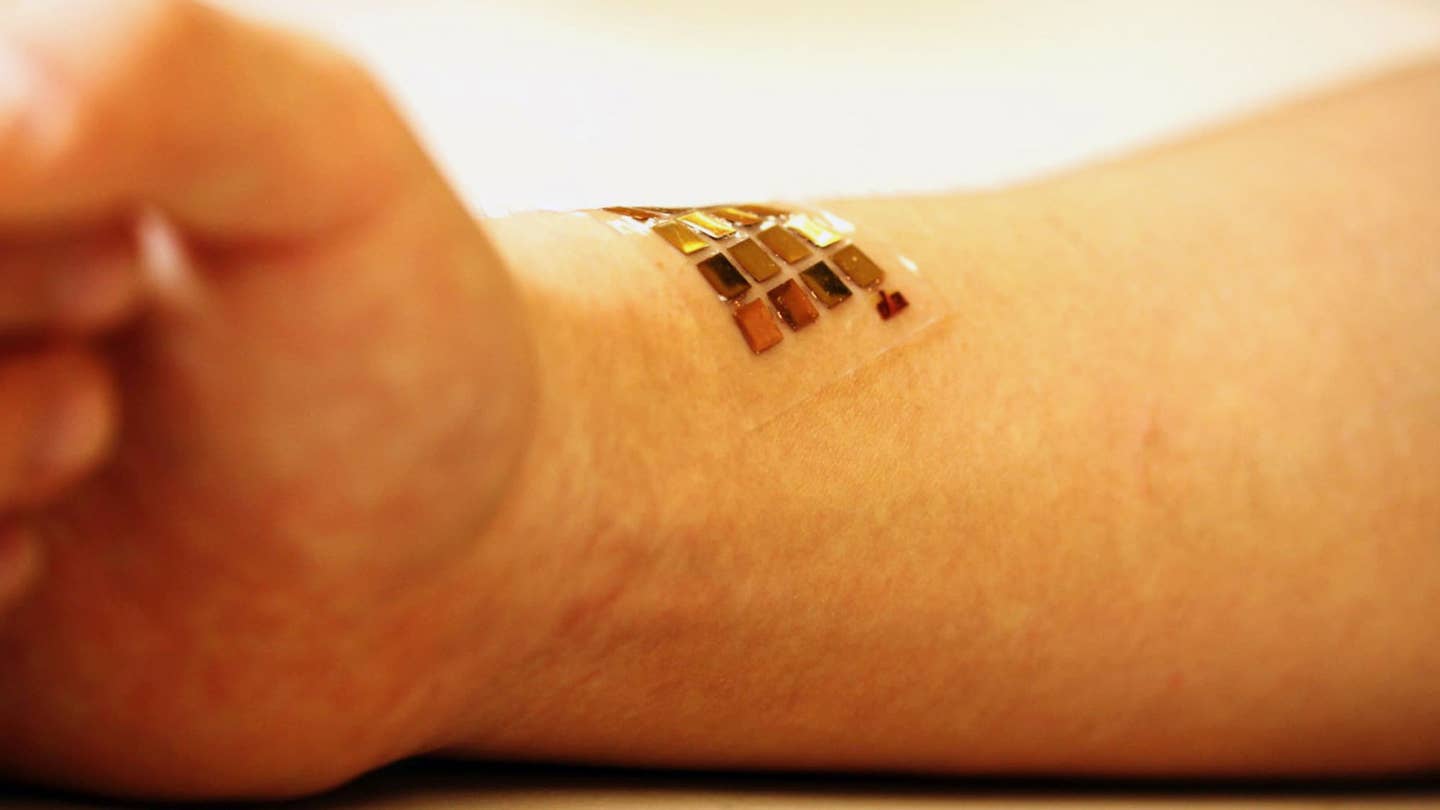 The biggest hurdle facing implantable devices and flexible, wearable electronics is that we don’t yet have small, flexible, wearable batteries. Plugging your i.am smartwatch or Hexoskin smart shirt into a wall outlet is not a big deal. However, the big-picture potential of tiny sensors ceaselessly monitoring your health and movements can only be fulfilled when those sensors don’t need to go offline for six hours to recharge. An international research team at headed by materials scientist John Rogers, a professor at the University of Illinois at Urbana-Champaign, might have the solution: a flat, stretchable, flexible, waterproof, lithium-ion battery that can be applied to the skin like a Band-Aid.

The research team started with a conventional li-ion battery and cut it into tiny, super thin tiles. They laid the tiles into a soft, rubbery substrate and connected each tile with wire looped into tight “S” shapes. The team put another layer of stiffer rubber on top, then put solar cells atop the battery tiles. When the rubber material is stretched, the S-shaped wires in between the tiles straighten out; researchers showed the battery can elongate up to 30 percent without losing functionality. The team said power output is comparable to the original, uncut battery, and wireless inductive charging is possible from short distances. The proof-of-concept powered a set of biosensors and chips for up to nine hours before needing to be recharged, and ran through 20 recharge cycles without a drop in performance.

Years of development have gone into this tech, and Rogers or his associates have usually been at the front of it. Three years ago Rogers and Northwestern University professor Yonggang Huang showed off a stretchable battery that could elongate by up to 300 percent, but used much smaller “energy islands” – the actual lithium-ion battery tiles. The two had been collaborating since 2007, and it was Huang who came up with the S-shaped wire arrangement – more intricate then than on this new battery – that enabled the stretch capability. That previous battery worked even when it was applied to a human elbow.

The creation of a flexible power source dovetails with the epidermal electronics system (EES) Rogers and his cohorts revealed in 2011. The EES is a miniscule, flexible, stretchy sensor thinner than a human hair that can be applied to the body without adhesive to monitor body wellness or performance. A few years later they showed off a slightly larger chip that can manage EEG and EKG monitoring. The long-range vision is for the flexy battery to wirelessly power a flexy sensor outside or inside the body, and for the wearer to be able to recharge the system either through heat or kinetic energy, or inductive charging.

It will be a while before all of this gets commercialized, but just know that your cyborg future took a big step forward thanks to Rogers and company – at least one person imagines using the battery to power an electronic eye camera. If you’re keen on details, you’ll find them in a paper published in Proceedings of the National Academy of Sciences.

Drive Wire: This Battery Pack Will Keep Your Phone Charged

But the science bros are not convinced.