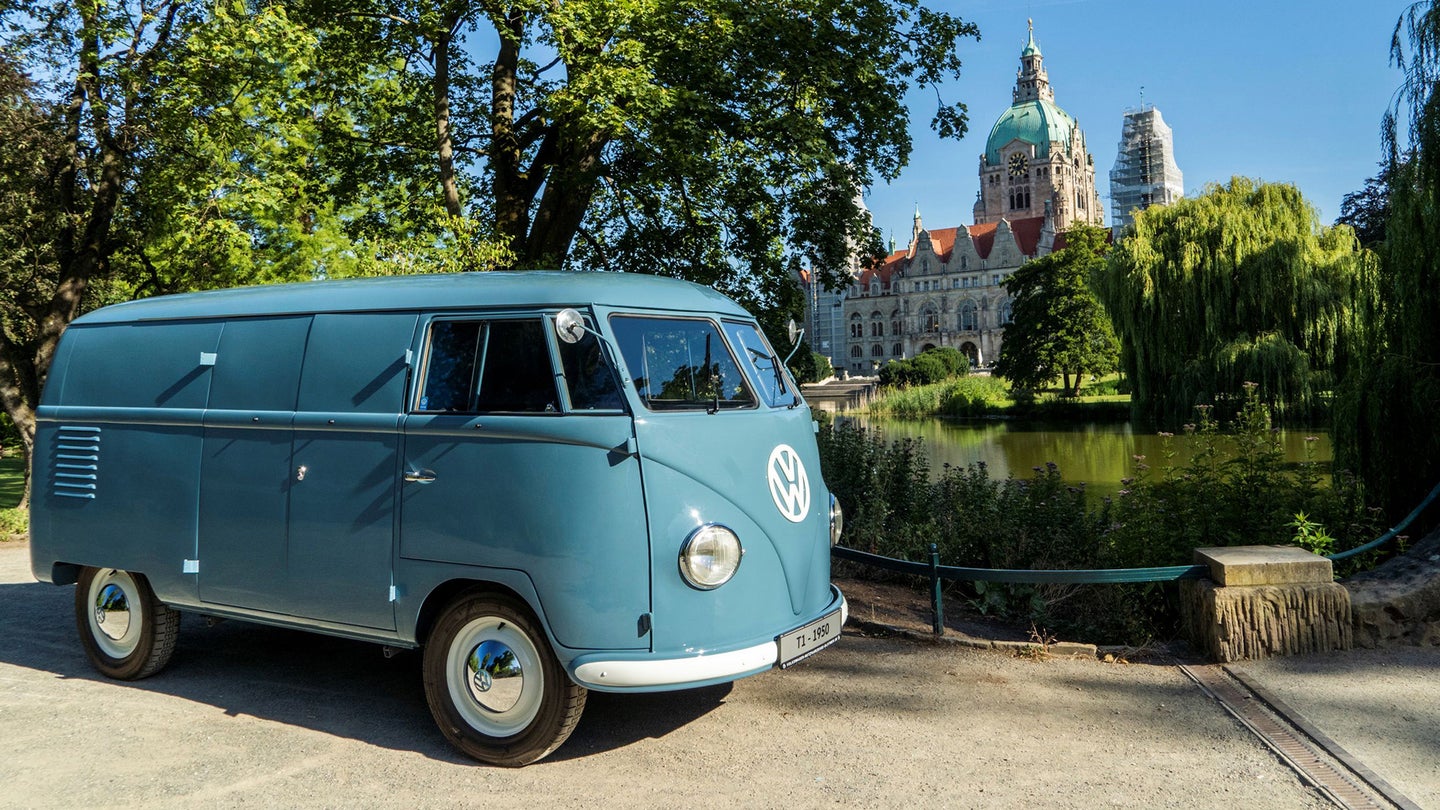 Volkwagen's then-freshly appointed CEO Heinz Nordhoff approved the Type 2 van for production on May 19, 1949, and the first VW Bus left Wolfsburg on the 12th of November that year. After the premier, customers could choose between the Kombi with the two side windows and removable seating or the plain Commercial model van. The more glass-heavy Microbus joined the lineup in May 1950, with VW ending up building a total of 9,541 Types 2s in the first production year.

Today, the word's oldest road-legal Type 2 is a dove blue panel van sporting chassis number 20-1880, known as Sofie. Based in Hannover, this 1950 model has been a cherished member of VW Commercial Vehicles' collection since 2014.

To celebrate Sofie's 70th birthday, this Wednesday, VW's team surprised the van with a cake featuring seven spark plugs, one for each decade. Along that, the company also shared the van's colorful story:

On August 5, 1950, chassis 20-1880 went to the town of Hildesheim to become the first Bulli in that part of Lower Saxony. Following 23 years of commercial action in the region, the company that bought it new sold it to a collector. Exchanging hands within the community, by 1992, this dove blue van found itself in the classifieds one last time.

Upon learning that it has the lowest chassis number known at the time in the Bulli community, Tonny L. from Denmark made his move. With around 60,000 miles on the clock, the blue van found itself on the back of a flatbed, heading towards southern Scandinavia. Having been off the road for 19 years, Tonny decided to replace everything needed to drive the van again and christened it 'Sofie' after the first T1 ever delivered to Denmark.

In early 2000, chassis 20-1880 entered a full restoration that was signed off on three years later with a test drive to the VW meet in Bad Camberg. In the following 11 years, Tonny put more than 13,000 miles on his 1950 Volkswagen without ever hearing of an older T1 out there.

When the time came to let driving go, the Dane decided not to let this one vanish into yet another private collection. Instead, 2014 surprised Tonny with a chance encounter. During the Crown Prince of Denmark's visit to Volkswagen Commercial Vehicles in Hannover, an accompanying importer mentioned in passing that there is a 1950 Bulli in Denmark looking for a new home. Tonny was soon contacted by VW's Oldtimer department, and they both agreed that the van has to be seen by as many people in the future as possible. A few handshakes later, the van called Sofie was on its way back towards Germany.