The World Of Cars Has A Diversity Problem. How Are We Going To Fix It?

Black Lives Matter is having a moment. The auto industry and motorsports must rise to meet it. 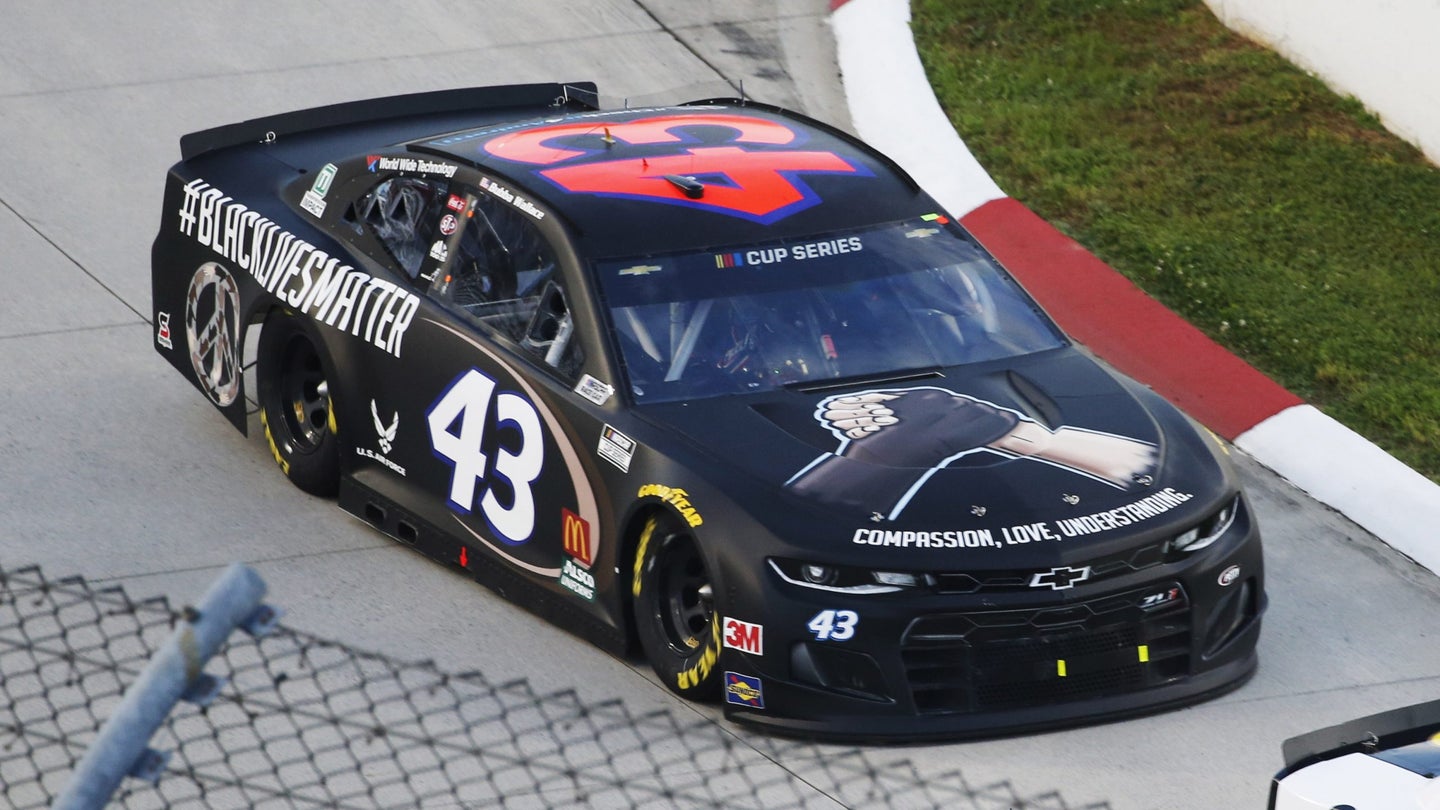 Ever since the tragic murder of George Floyd at the hands of Minneapolis police a few weeks back, my phone has been ringing off the hook. The callers? Pretty much everyone in the automotive industry, from reporters all the way up to industry executives. It turns out I am the Black guy in the American automotive industry. OK, that last part is hyperbolic, but honestly—and unfortunately—it feels like it’s not too far off from the truth.

On the racing side of the industry, there are only a few minority drivers competing at the top levels of the sport in the U.S. Formula One’s Lewis Hamilton is obviously the most visible Black driver in the world, but he is British. For U.S. drivers it’s NASCAR’s Bubba Wallace (and Jesse Iwuji in NASCAR’s lower-tier series), and then probably myself on the road racing side of things. (Jann Mardenborough and Axcil Jefferies are top road racers as well, but neither are American). At the end of the day, that's about it.

In the automotive industry itself, there are still only a few top Black executives, most notably the now-retired Ed Welburn at General Motors and Fiat Chrysler design boss Ralph Gilles. Ford’s New Model Launch Program VP Linda Cash and Executive Director of Connected Vehicles Don Butler round out the list. Rodney O'Neal, once CEO of supplier giant Delphi, retired a few years ago.

As you might guess, diversity isn’t great on the automotive media side of things either. Diversity, in general, is terrible in nearly every newsroom, and though I’m not aware of statistics to back it up, it’s no secret that the media room at the Detroit Auto Show always looks like the audience at a Phish concert. There’s definitely no shortage of Black people who love cars, but the journalists who cover that world are predominantly white.

The best representation for Black people in automotive media may be on the YouTube side of things with guys like Marques Brownlee and Rich Benoit of Rich Rebuilds both having a substantial following. But that’s only two channels out of literally thousands of automotive focused content creators. I haven’t forgotten Rory Reid but again he’s British—which isn’t to say that the UK doesn’t have its own issues in entertainment and journalism or with the police —just that I’m here talking from an American perspective.

On the “print” side, ever since the Washington Post’s highly respected columnist Warren Brown died in 2018, and Sam Collins left Racecar Engineering, I have unwittingly become one of the very few automotive journalists writing for any major automotive outlet. A fact that I didn't realize, but was underscored by the sheer volume of phone calls and emails I have received over the past weeks. Calls and emails from industry people trying to contact me looking to find a Black perspective on the current protests and what they mean for the American automotive industry. When they went through their Rolodexes, my name was probably one of the only names that popped up.

And therein lies the problem.

In an industry that takes in $400+ billion dollars annually, myself, Wallace, Gilles and a few others simply can't be the sole voices for African-Americans in this space. The fact that I am even writing that seems surreal.

However, that still leaves 80 percent of African-Americans that do own a car. And that group is clearly not well represented within the automotive industry as a whole. When the people who make decisions on what cars to build, how best to market them and who to market them to, are overwhelmingly white, you end up (intentionally or not) ignoring a fairly large segment of the population. Combine that with a melanin-challenged press corps and anemic minority representation on the dealer level and you have effectively excluded Black people from the automotive market.

This lack of diversity within the industry is puzzling to me. Why would an industry this huge ignore targeting a very large percentage of its potential buyers? Also, as that is a group that has the largest number of households without a car, why, with currently flagging car sales, would you ignore the very real possibilities of expanding sales within that group?

This lack of representation is just as dire on the motorsport side of things. Now a large part of that is due to the sheer expense of getting into motorsports, and as a large percentage of Black people don’t have access to substantial disposable income that is needed to fund a fledgling racing career, minority participation is always going to lag behind.

However, drivers are just the tip of the motorsports iceberg. There are thousands of people in the motorsports industry that support us drivers. Mechanics, engineers, PR, hospitality, and so on. The percentage of minorities in those roles are substantially lower than the percentage of Black drivers. Some of these jobs require specific skill sets that take years of dedicated schooling and motorsports experience to excel at, but there are also plenty of jobs that do not. And still, those jobs don’t seem to end up being filled by minority candidates.

Now that I've pointed out the problems in the industry, what are the solutions? The answer to that depends on how committed those in leadership are to creating real change, because there is no short term solution. It's not as if you can conjure up another Lewis Hamilton or Bubba Wallace overnight to shore up the number of Black drivers in motorsports. Ed Wilburn spent decades at GM before becoming the head of design, so clearly adding more Black executives at the top is not the work of a minute. So in looking at these problems it's clear that this is going to take a huge amount of time and effort to correct. And that is what the industry has to commit to. Look at how people like Brehanna Daniels, the first African American woman to become a NASCAR pit crew member, are changing things for the better.

The problem is that the questions I'm getting are searching for a short-term solution. People want a quick quote or a splashy TV ad to show that they're committed to the cause but that is just window dressing. In order to affect real change, a lot of the work that will need to be done will need to be done out of the limelight.

That’s work like supporting programs like the Urban Youth Racing School in Philadelphia (which some industry companies like GM already do) that uses motorsports as a tool to help inner-city kids go into STEM fields and give them a path into the automotive industry. On the motorsport side of things, F1’s Ross Brawn has recently come out with his thoughts regarding motorsports top series commitment to making things more open to minority groups.

"Our thoughts were that the reason why we don't have more diversity in Formula 1 starts at the very beginning,” he said. “It starts at the grassroots level, and it even starts in schools with STEM topics, science, technology, engineering and maths…We are helping with these initiatives. Clearly, as a company, we've got a lot of initiatives in terms of a gender pay gap and looking at other pay gaps within our companies, making sure we're doing everything we can.”

One of the more poignant things that Brawn touched on is the popular conservative narrative that minorities are looking for an advantage, as opposed to a leveling of the playing field.

"The fact is that F1 is a very strong meritocracy,” he said. “It should always be that way, it should always be the best who win. We can't force that. But we can give greater opportunity to minority and ethnic groups to get involved in motorsport, not just driving, but engineering, other activities.”

I have to admit the guy who is leading the charge into uncharted waters is Wallace, when he announced that he would be running in the NASCAR race at Martinsville, VA in a car adorned with a Black Lives Matters livery. And he didn’t stop there. He used his platform to push the most Southern of American sports to finally part ways with the ugliest aspects of its past and ban the Confederate Flag from any of its events. I do not envy him, but I will give him a standing ovation for bringing the NASCAR demographic face-to-face with the racism (implied or otherwise) that has always been linked with stock car racing.

Fortunately for me, I have been somewhat isolated from that, on the road racing side of things. Stock car racing’s Southern “flavor” has remained fairly well ensconced on that side of the industry. Nonetheless, I am happy to see the end of it, not for me personally but for any other minority driver that had dreams of one day racing at Daytona but saw all of those flags as a very overt symbol that they were not welcome.

I've got to take a hard look at myself in the mirror because as one of the few Black representatives in the media space, I need to be doing what I can to encourage more Black writers to try their hand in this industry. And I need to push the publications that I write for to do more to attract those journalists and add them to their ranks. There are plenty of Black journalists out there that are brilliant writers, far better than myself, that would do a great job in bringing new energy and enthusiasm into automotive journalism.

Black culture has added texture to the American way of life since its very founding. Black music, art and literature have influenced nearly every facet of American life in incalculable ways. Adding that influence to a stagnant automotive industry has the potential to be transformative. Both Welburn and Giles have designed some of the most iconic cars for their respective companies. I’d love to see the possibilities of what a new generation of Black designers could bring.

The same goes for the media side of things. Bringing in a diverse group of journalists with different perspectives, voices and stories to tell could be revitalizing to an industry that has seen a fair amount of contraction in recent years.

I don't consider myself a Black race car driver or a Black journalist. I'm just a race car driver and just a journalist that happens to be Black. But that reasoning doesn't let me ignore that I am Black, and I need to contribute to the solution as much as I need to encourage everybody else to contribute as well. This is an issue that is so large that it won’t be solved by any one person.

But if every individual contributes and makes even a small difference, that's the only way we are going to be able to tackle this problem. Together.