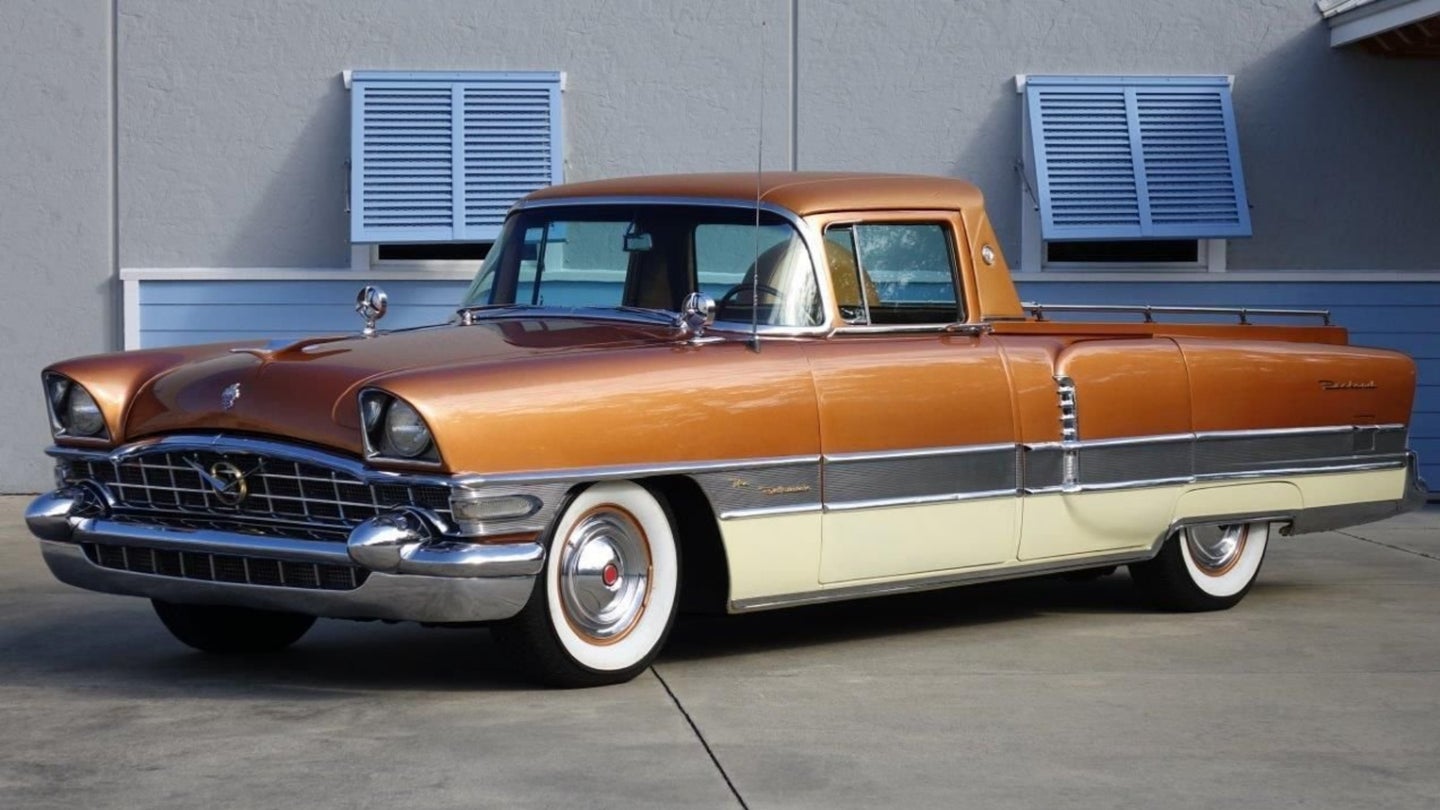 The Packard Motor Car Company was once one of the finest automakers in the world. In fact, Packard was one of the first automakers to put a V12 under the hood of a production car in 1915. Their legacy of luxury continued throughout the depression, until their tragic demise at the hands of the economy—and Studebaker—in 1958. One of the last cars that Packard made in 1956 was the Patrician sedan. This particular Patricianoffered for sale by Motor City Classic Cars is especially interesting.

That's because it's been very neatly converted into a pickup truck, a conversion done by Speedwell Garage of Parkton, Maryland. Just by looking at it, you wouldn't necessarily be able to tell it's not supposed to be that way, either.

Despite being altered into a pickup, most of the mechanical parts of this Patrician are still the same as they were was from the factory. The original 6.1 liter, 286 horsepower V8 is still in place, and it's still sending power to the rear wheels through a push-button, two-speed Twin-Ultramatic transmission. Although this transmission has an excellent name, Twin-Ultramatic, it was in reality the only automatic transmission to be developed by an independent automaker in the 1950s and had several teething issues.

Beyond the drivetrain, most of the car is new. The interior has been completely redone, including a backup camera cleverly concealed inside the centrally mounted glovebox. The headliner is also new, and so is the air conditioning.

The two-tone paint is also fresh, and note the color-watched wheels set behind the big chrome hubcaps. All of the chrome looks to be in great condition as well—an important thing to get right on a car from the 1950s.

It's unclear where the tailgate came from, it could be new, but we are certain that the wooden floor of the bed is new, and it looks very nice. Interestingly, the rear doors were kept functional even though the car only has a single front bench seat. The seller states that this is for extra storage in the area under the bed. If this were my custom Packard pickup, I would probably just weld that up.

The image above gives us a peek of one of the cars coolest features, its dashboard. Packards always had excellent dashboards, even before they were putting gauges onto them.

Listed at $68,500, this is an expensive pickup, even by modern standards. For that sort of money, I'm not sure what I would be willing to haul around in this thing. Maybe a full load of pillows or blankets. And while its cost may disqualify it from doing actual work, that's not really what this is for. It's a unique project that's great to look at and appreciate.

Packard never actually made a pickup truck, either—they would've considered that below them. So if you buy this thing, you'll be the owner of one of the few custom conversions known to exist.