See the Original Sketches for the DeLorean Sedan That Never Was 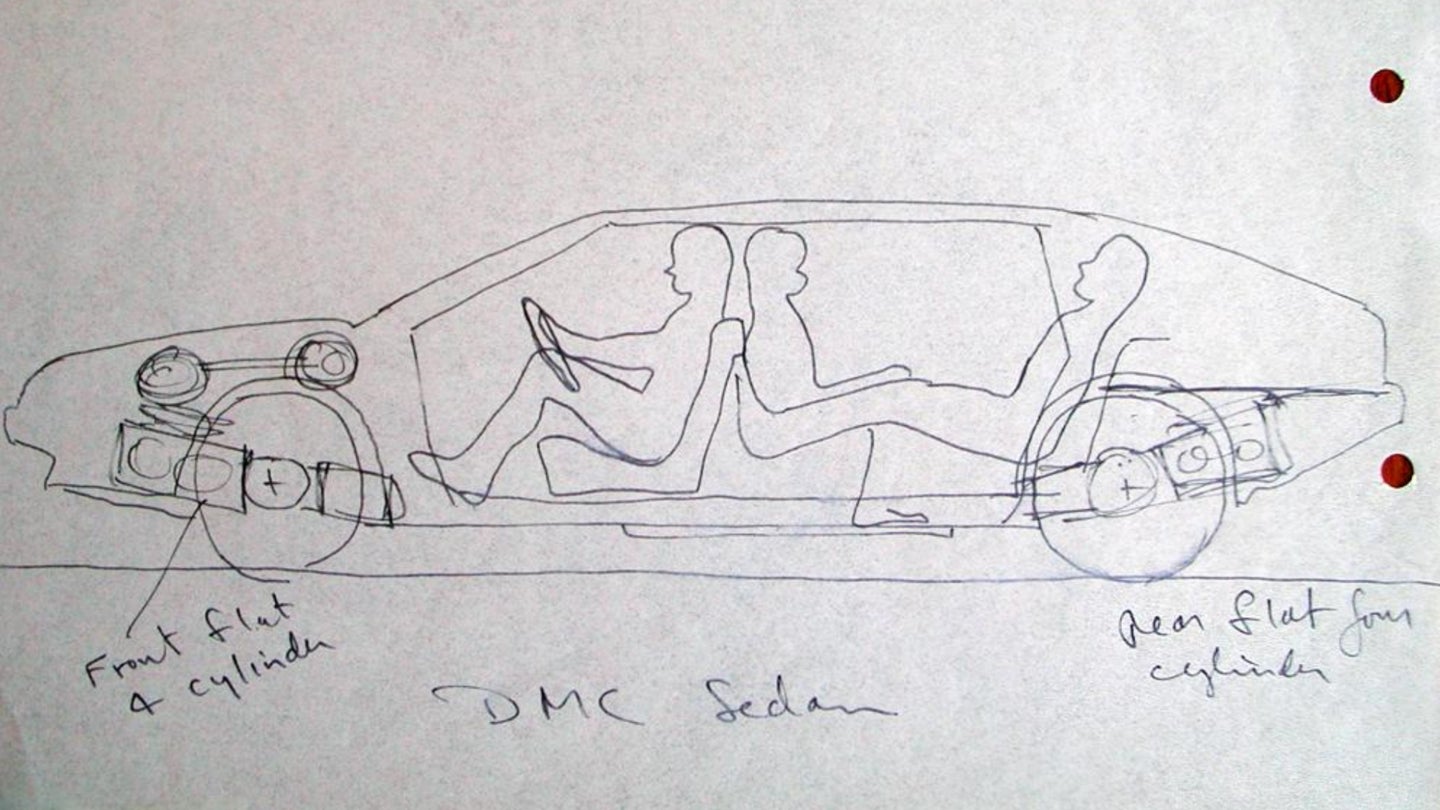 The DeLorean needs no introduction. Thanks to its star turn in the Back to the Future films, the vehicle has secured its in pop culture history instead of languishing as the sole product of a defunct, obscure automaker. But the DeLorean Motor Company's ignoble demise in the early 1980s didn't mean it wasn't thinking big about its future. There were ambitions for a truck, a bus (yes, really), and this: the DMC-24, the DeLorean sedan that never was.

These napkin sketches done by John DeLorean might not look it, but his push for the DMC-24 was serious enough that the Irish automaker put together a real 37-page product plan and commissioned Giorgetto Giugiaro at Italdesign to build a full-size prototype in late 1981, just months before it officially went bankrupt. Giugiaro's work was nearly done when that happened, so the famed designer did what anyone would: recycled and rebadged the model, which itself was based on a 1980 Lancia concept, to turn it into the Lamborghini Marco Polo show car. (Lamborghini passed.)

An appropriately convoluted tale for an automaker as weird as DeLorean. Anyway, let's get back to these early sketches from the late 1970s, because they show DeLorean's plans in their truest, most unadulterated form—starting with a three-row, twin-engine sedan molded in the DMC-12's iconic wedge shape. And of course it had gullwing doors. See for yourself:

To achieve ample interior space in such a low-slung car, a flat floor was necessary, which meant it wouldn't be possible to run a driveshaft underneath. Rear- or front-wheel drive wasn't good enough; instead, two flat-four engines are located at either end of the vehicle. This would've required two transmissions as well, but those aren't accounted for here.

Another unusual feature is the seating. It's a three-row sedan, but the passengers are not all facing the same way. The middle sketched figure with a head like Barney the Purple Dinosaur is facing towards the rear of the car. It seems as if this arrangement was intended to allow up to three passengers to fit behind the driver while preserving as much shoulder room as possible.

DeLorean produced an updated sedan sketch in 1979, showing the DMC-24 prototype that Italdesign would later build (or rebadge, depending on your perspective). The vision is a lot more filled out, still relying heavily on the DMC-12 for its design and powertrain but featuring a more conventional two-row, single-engine setup.

And if you think these plans amounted to scribbles on a napkin, you would be mistaken. A little poking around that 37-page product plan linked here and excerpted below tells you how serious they were. Minute details were worked out, down to the number of warning lights on the dashboard and what tools would be in the tool kit (at least a jack and a lug wrench, plus whatever else contemporary competitors were putting in their kits).

OK, so maybe they didn't have everything nailed down. The powertrain, though—that was the easy part. The 2.85-liter Renault V6 from the DMC-12 would be upgraded with twin turbochargers, both with integral wastegates. That hot charge of air would then be sent through two intercoolers before reaching the combustion chamber. It is also stated that the engine would be offered with natural aspiration and a choice of a 5-speed manual or 3-speed automatic transmission. This turbocharged power would be a step in the right direction for the brand—the DMC-12 was known for being far slower than it looked, having just 130 horsepower.

Other dream goals included a drag coefficient of under 0.3, a 110-inch wheelbase (the DMC-12 was 95 inches between the axles), and a target curb weight of 2,750 pounds. If you're wondering how well two rows would really fit in a DeLorean, the team was shooting for between 36 and 42 inches of rear legroom (that's about what a Toyota Camry offers, for perspective).

As for the planned tech, get a load of this list. The DMC-24 was to have the following features, some of which was just showing up in high-end production cars or completely ahead of its time:

DeLorean liked the Lancia Medusa concept that Italdesign had done in 1980⁠—especially its very low drag coefficient of just .255—and asked for Giugiaro to implement more of DeLorean's styling cues and technology in creating the first DMC-24 prototype. Italdesign complied and came up with a wooden mockup in 1982, right before DMC went bankrupt. Pictures of the DMC-24 as the Lamborghini Marco Polo still survive; note the recognizable thin-spoked DeLorean wheels in the first picture below.

Although the DMC sedan wasn't to be, a couple of years ago an enterprising New Jersey man spent far too much time adding a backseat to his DMC-12, making it the only four-seat DeLorean in the world. Maybe if those plans for continuation cars ever get off the ground, we'll see someone try their hand at building a real DMC-24.