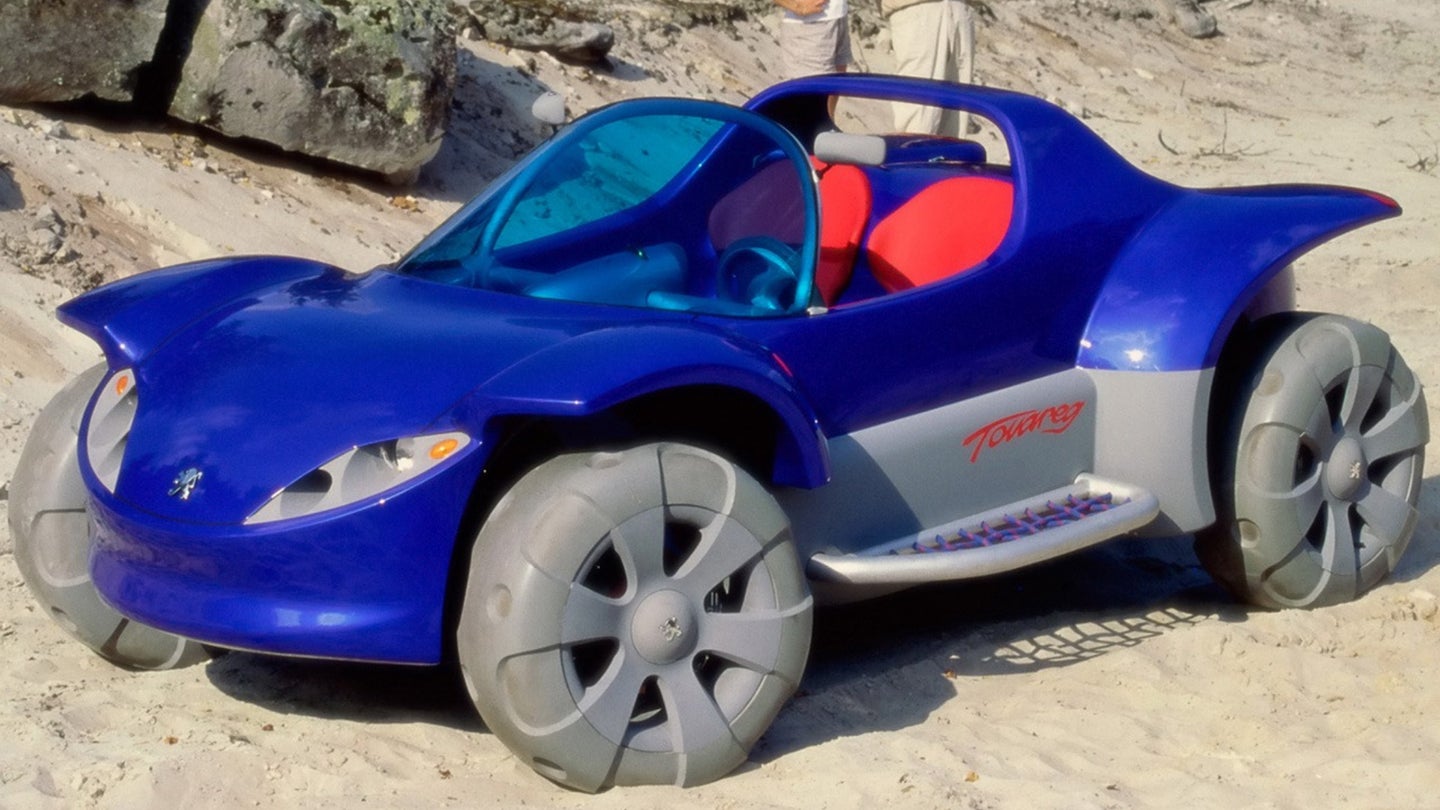 Peugeot makes all of these weird concept cars because it's a French company, obviously. That's the only reason. We all know it's true, and we don't have to explore it further. There's a far more pressing question we need to address: Why are almost all of them completely functional? Was it a company requirement that the press kit included footage of someone driving along the beach?

I'm not gonna lose any sleep over it⁠. In fact, I'll drift off dreaming of rolling through St. Tropez, the breeze in my hair, a Gauloises between my fingers, while all the world stares slack-jawed at my 1996 Peugeot Touareg—a neofuturistic electric dune buggy and one of the strangest machines to reach the full prototype stage at a company known for strangeness.

I like this press photo that Peugeot supplied primarily because of how apathetic the two people in the image are about the life-sized Hot Wheels car in front of them. Completely disinterested. There are other things to take pictures of. That? That's just my beach car.

You'll notice the Touareg has no front grille—electric concepts are the norm now, but it was far from common when this was built in 1996. According to allcarindex, the vehicle's electric drivetrain was finicky, to say the least. The small Japanese-made battery pack—the specs of which I've been unable to track down—that stored the Touareg's energy would apparently melt after every day of use. When giving media test drives, Peugeot engineers would know it was time to replace the batteries when they started to stink. Sounds lovely. I wonder if I can get 'melted battery' scented candles. I'll have to check Yankee's catalog.

Check that video out. If you don't think it's quick, I mean, it passes that weird wind-powered tricycle thing like it's in reverse. And look at those color-matched wheels and tires—the tread is also matched to the rim design. That's just awesome. Not very functional on anything that's not sand, but awesome nonetheless.

Even with the unreliable batteries, the vehicle promised a range of 180 miles. This is a slightly less impressive statistic due to the fact that the Touareg had a gasoline-powered range extender. Its mid-mounted electric motor put out 50 horsepower and 144 lb-ft of torque, which was enough to fling its 1,800-pound curb weight to 70 mph. It was also a real performer out on the dunes thanks to four-wheel-drive.

I'm not sure why it was named after a nomadic people indigenous to the Sahara desert, but that's beside the point. I guess there is some sort of shaky connection there. Again, these French concepts just kind of get made—they aren't worried about the justifications.

Only one of these was made, and it's at the Peugeot Adventure Museum, along with most of the company's other unorthodox concepts. I would recommend a visit once this whole pandemic business is over.