At $800 apiece, good luck finding this much vintage metal for less. 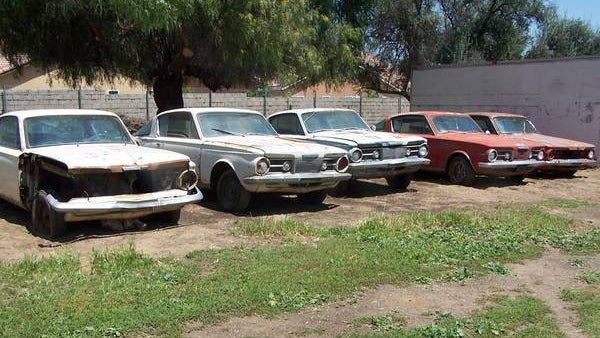 Most times, when we write about cool classic cars for sale, we throw around the phrase "If you have the money" or something of that ilk. The vintage muscle machines in this Craigslist ad, however, won't break the bank, but they might break your HOA's parking policy. That's because there are five 1965 Plymouth Barracudas in total being offered at just $800 apiece, totaling $4,000 for the entire lot.

While you're more than welcome to take home all five, the seller explains that they will part with them separately if that's what it takes. None of them are running or driving, but the buyer will at least have their pick from slant-six and V8 cars with either a three-speed manual or automatic gearbox.

The '65 ‘Cuda only came in a fastback body style with a huge wrap-around rear window, which thankfully appears to be intact on all of the cars. All five are sitting in the California sun so dry rot is a bigger risk than rust. Long-term exposure to high-intensity UV rays also look to have thoroughly toasted the cars' interiors. Between the five of them, though, there appears to be enough parts to come up with at least one running and driving example, but that won’t happen without a considerable amount of work and enough room to store a handful of classic cars in various states of disrepair.

Barracudas from the mid-1960s are not the rumbling, Hemi-powered machines that became so popular just a half-decade later. They're more reserved than the later models, but customized examples make excellent classic driver's cars and look the business, too. Clean cars with straight restoration work can command decent money, so there are plenty of possibilities with the lot of project cars.

The worst-case scenario for a potential buyer is that somehow none of the cars are salvageable and end up being the same immobile decorations that they are now, just in a different place. Even so, at $800 each, the risk of financial ruin is low, because there’s likely more than $4,000 worth of parts between the cars. You’ll just have to be brave or reckless enough to wrench them out of the Barracudas’ cold, dead hands to cash in.

Better yet, the seller claims it’s in running, driving condition.