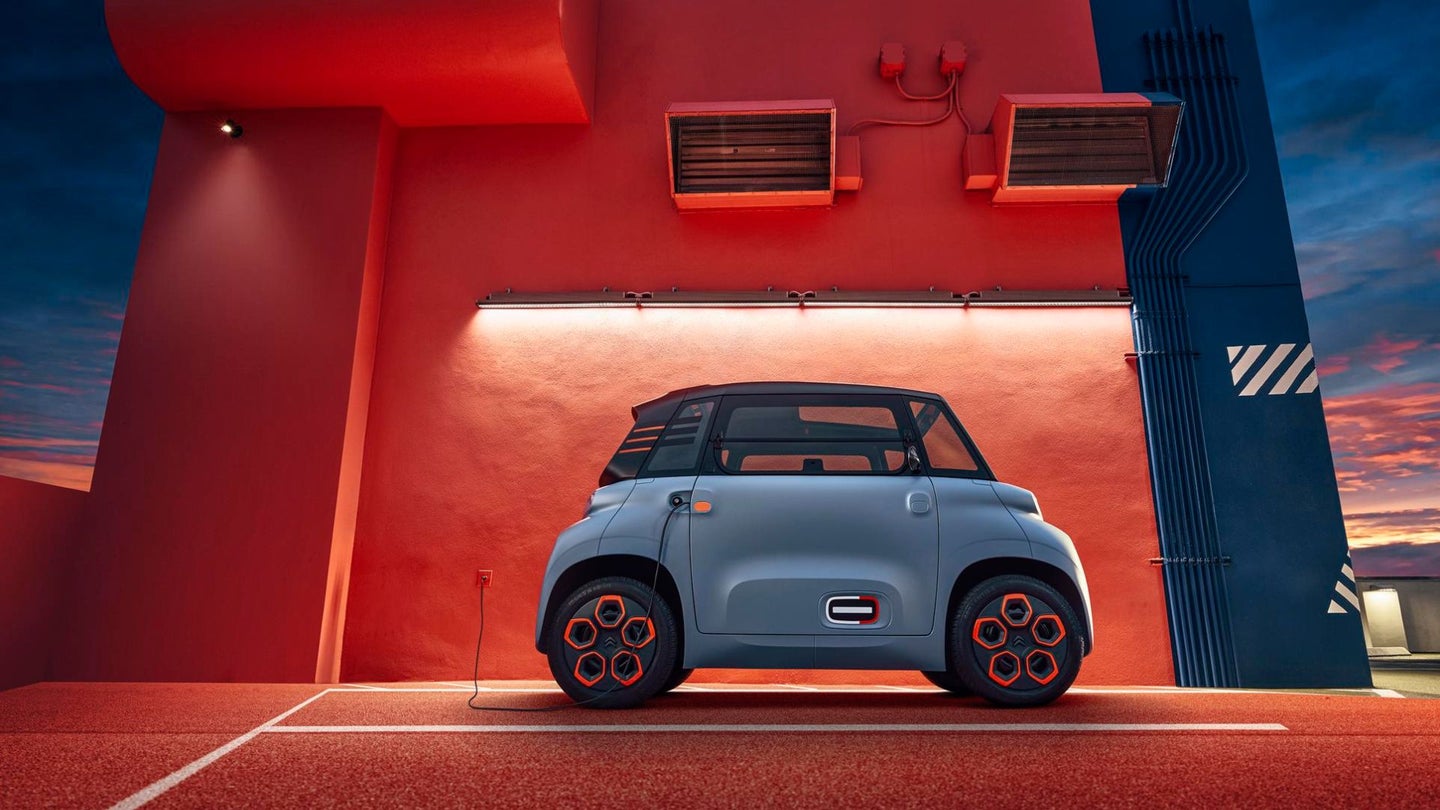 There’s a grandmotherly want rising to my hands directing me to squeeze the cheeks of Citroen’s cute AMI EV city car. I mean, look at it, it’s petite, funky, weird, and unmistakenly French. Sure, it isn’t coming to the U.S., but when has that ever stopped enthusiasts from pouring adoration onto forbidden fruit?

Based on the AMI Concept that debuted last year at the Geneva Motor Show, the AMI is a production-ready car that “has no equivalent in the mobility landscape,” at least according to Citroen. But the automaker might be onto something as while the engineering behind AMI is cool, the real disruption comes from how Citroen aims to bring it to market.

You can buy an AMI online and have it delivered to your home, which will cost around 6,000 euros, but Citroen’s aims for the AMI aren’t the typical retail model. Rather, the company wants you to either lease it for just $22 a month, there’s a host of lease terms, or use the company’s ride-share service for under $1 per minute behind the two-seater’s wheel.

"For 100 years, Citroën has always been innovative and creative in democratizing freedom of movement,” says Citroen’s CEO Vincent Cobée, adding, “This year, Citroën has come up with a new urban mobility solution accessible to everyone: compact, protective, 100% electric, without driving license, and affordable. AMI aims to be a real breakthrough in enabling urban mobility, a solution in sync with new modes of consumption. This great idea was a concept one year ago. We are proud that we have made it happen today. "

And that remark about not needing a driver’s license isn’t just a casual misquote, Citroen plans to release AMI to the public with the minimum age requirement being just 14, at least in France. Elsewhere, 16 will be the standard. All of which is thanks to AMI’s classification as a quadricycle, which is governed by different laws compared to cars. As such, according to Citroen, “AMI is for everyone.”

As for the tech, the pipsqueak quadricycle is powered by a 5.5kW battery pack good for up to 43 miles of range. Not exactly what you’d call a long-distance cruiser, but for Parisians and Europeans in crowded, tightly woven ancient cities, it’s more than enough. Citroen also says drivers will be able to hit a blistering 27 mph in the AMI, and charging can be done through a conventional outlet and be topped off in just three hours.

Inside, passengers are treated to not exactly a well-appointed interior, but one of spartan resource. There’s a steering wheel, pedals, an outlet jack for your phone to stream music and charge, a cup holder, and enough storage for a small bag. And that’s it. There’s no air-conditioning, though heating is included. The funkiest part, however, are the AMI’s doors, which open opposite of each other—the driver’s side opening toward the rear, the passenger opening toward the front.

Just to reiterate, the AMI is not coming to the U.S., there’s zero market for it at the moment. But as U.S. cities begin to look into banning new internal combustion engine car sales, the crackdown on Uber and Lyft, Peugeot and Citroen possibly returning to America’s shores, and run trials of closing streets to all cars, maybe, just maybe, Citroen will consider bringing AMI to the States. Then I can pinch its cheeks in person instead of trying to do so through my laptop.