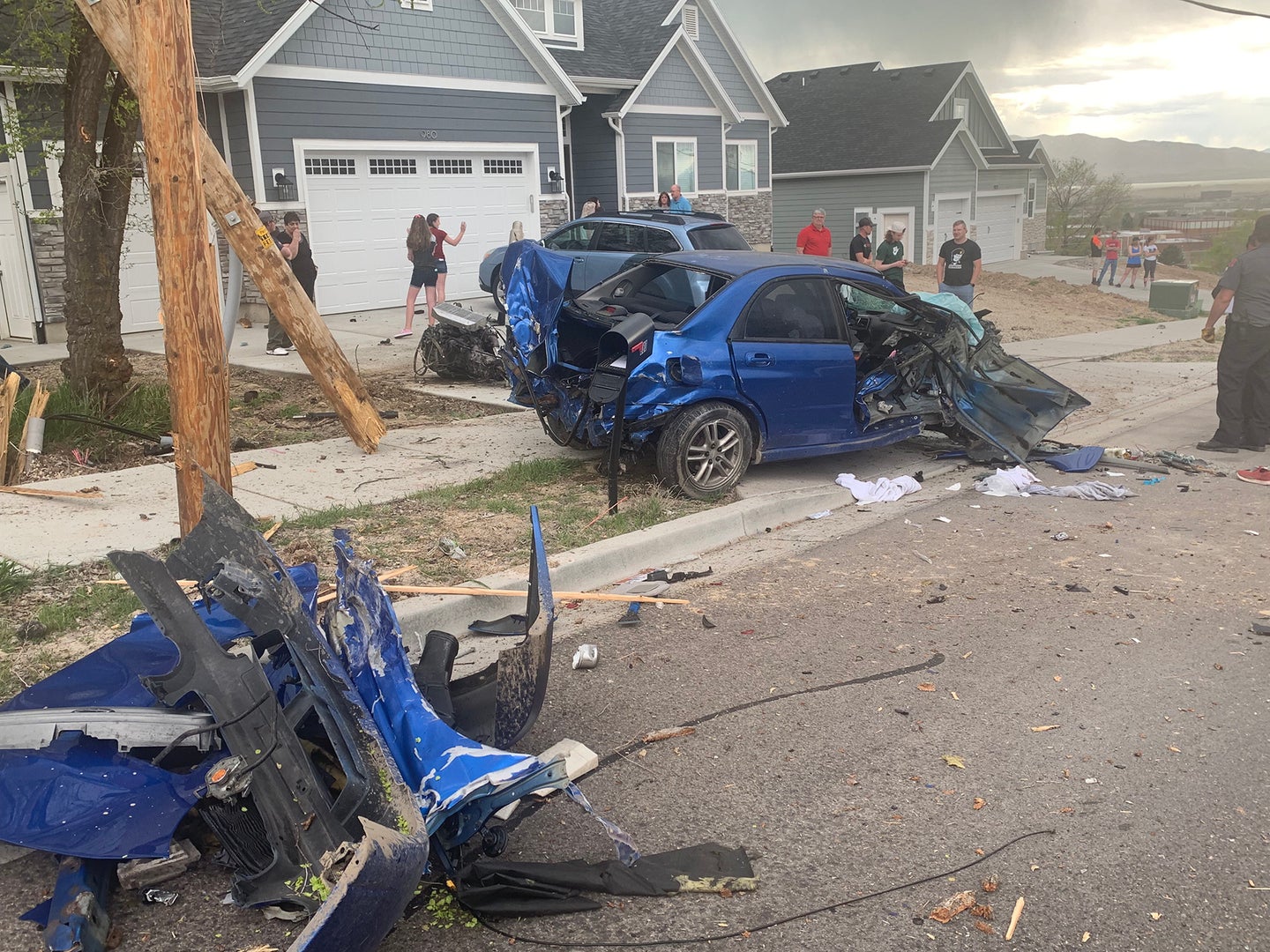 Last Sunday we reported on a story about a high-speed crash that resulted in the entire drivetrain of a Subaru WRX being spilled into people's front yards. The report originated from a Facebook post, and it quickly went viral due to the awry photos of the harrowing crash, which also damaged many innocent bystanders' properties. Details at the time of the post were sparse, with some comments shedding some light on the matter—but when it comes to Facebook comments, however, they're to be taken with a grain of salt.

Luckily, The Drive received a tip from a person who lives on the street where the accident took place, and whose property was damaged as a result.

According to Angie M., relaying her brother’s account, Shaun M., the crash occurred in Pleasant Grove, Utah. It was originally thought the driver sped through the neighborhood recklessly in a hooning attempt gone wrong. However, we've been told that the Subaru lost control of his vehicle while supposedly attempting to illegally pass a slower vehicle in the residential area, which sits at the base of a mountain with a steep grade. To top it all off, he was driving under the influence of alcohol.

While trying to overtake at a high rate of speed, the driver overcorrected during his attempt to merge back into the correct lane of travel, and as a result, he lost control of the vehicle. The Subaru then crashed in front of Shaun and Angie M. mother's house. The accident left behind a trail of debris and destruction that looks to be as long as a city block, effectively taking out five trees and two utility poles. After the investigation, the Subaru's battery was "discovered in a ditch nearly a block away and engine parts went through windshields in the neighborhood," Angie M. said in an email to The Drive.

The driver was ejected from the vehicle upon impact, along with the engine and transmission of his WRX with its exhaust still attached—a result of intentional design allowing for the engine to break away in the event of a collision. The engine also caught fire at some point, which makes sense given that it was still probably loaded with fuel.

After hearing a series of loud crashes, Shaun M. went outside to survey the situation, immediately running into the Subaru driver laying on the ground. According to original reports, the driver only suffered a concussion, some broken ribs, and a broken hip.

The impact was so great that the Subaru “snapped one telephone pole like it was a toothpick” after “having already hit multiple trees and a car,” Angie M. added.

An innocent third-generation Acura TL belonging to Shaun M. was, unfortunately, totaled as a result of the WRX's path of destruction.

Perhaps the only positive about this insane crash is the fact that no human lives were lost, and that Subaru builds an extremely safe car.