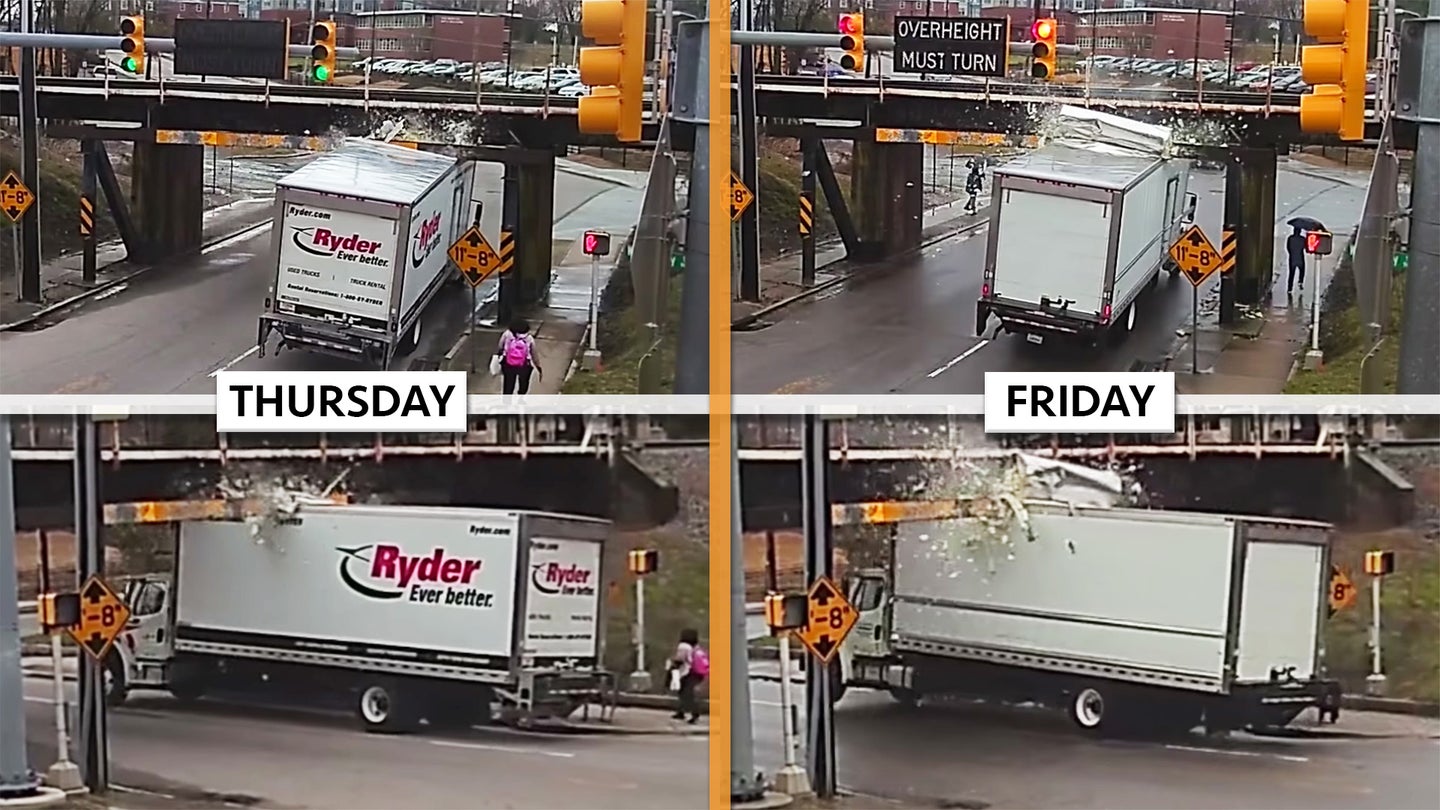 In fairy tales and folklore, it's a grumpy old troll who guards the bridge and tries to devour all who dare pass. In Durham, North Carolina, it's the bridge itself. The South Gregson Street train overpass, known online as the 11-Foot-8 Bridge for its low clearance, has been claiming too-tall trucks (and the occasional U.S. Army weapons system) for decades—and last week it nailed two refrigerated box trucks on consecutive days.

As always, the carnage was captured by a webcam that's been recording the bridge's sometimes-daily meals since April of 2008. The city previously installed a height sensor further up the road that triggers a red light and the "OVERHEIGHT MUST TURN" warning sign to give truck drivers a chance to realize their impending mistake. That failed to stop the person in the first video, though, who trips the sensor, sits through the red light cycle, stares at the warning sign, and accelerates straight into the bridge.

It should be noted that the doomed trucks in these clips aren't actually impacting the structure of the bridge, but rather a protective steel beam set up just in front. Regardless, it destroys the refrigeration unit and peels back the roof of the box with the cold efficiency of an apex predator. Reefer trucks are not cheap—you're looking at tens of thousands of dollars in damage right there. We hope the renter sprang for the extra insurance.

The video ends with the driver sheepishly reversing the mangled truck out from underneath the bridge and pulling over off-camera to assess. Unfortunate as that situation sounds, the driver in the second clip actually had it worse. Filmed the very next day, it shows the box truck straight up run the triggered red light and plow full speed into the steel guard. It's really quite a sight.

That extra momentum wedges the truck halfway under the bridge, trapping it in a tableau of defeat. The police arrive, followed by a wrecker that eventually pushes it free and hauls it away. The uploader notes this happened around lunchtime on Friday, completely blocking traffic for two hours on a stretch of road that sees upwards of 12,000 cars a day.

If you're curious why this bridge is still out there taking names in 2018, all this internet schadenfreude is made possible by antiquated regulations and infrastructure. It was built before modern clearance guidelines were set—bridges on nearby highways are 16 feet high—and because it carries train traffic, raising it to a proper height and safely re-grading the tracks for a mile in either direction is too costly.

Meanwhile, the road itself can't be lowered because it carries an unusually shallow main sewer line. So, it looks like the 11-Foot-8 bridge is here to stay in its hungry form, with over 140 kills since 2008. May the oblivious truck drivers of North Carolina never come to realize that.