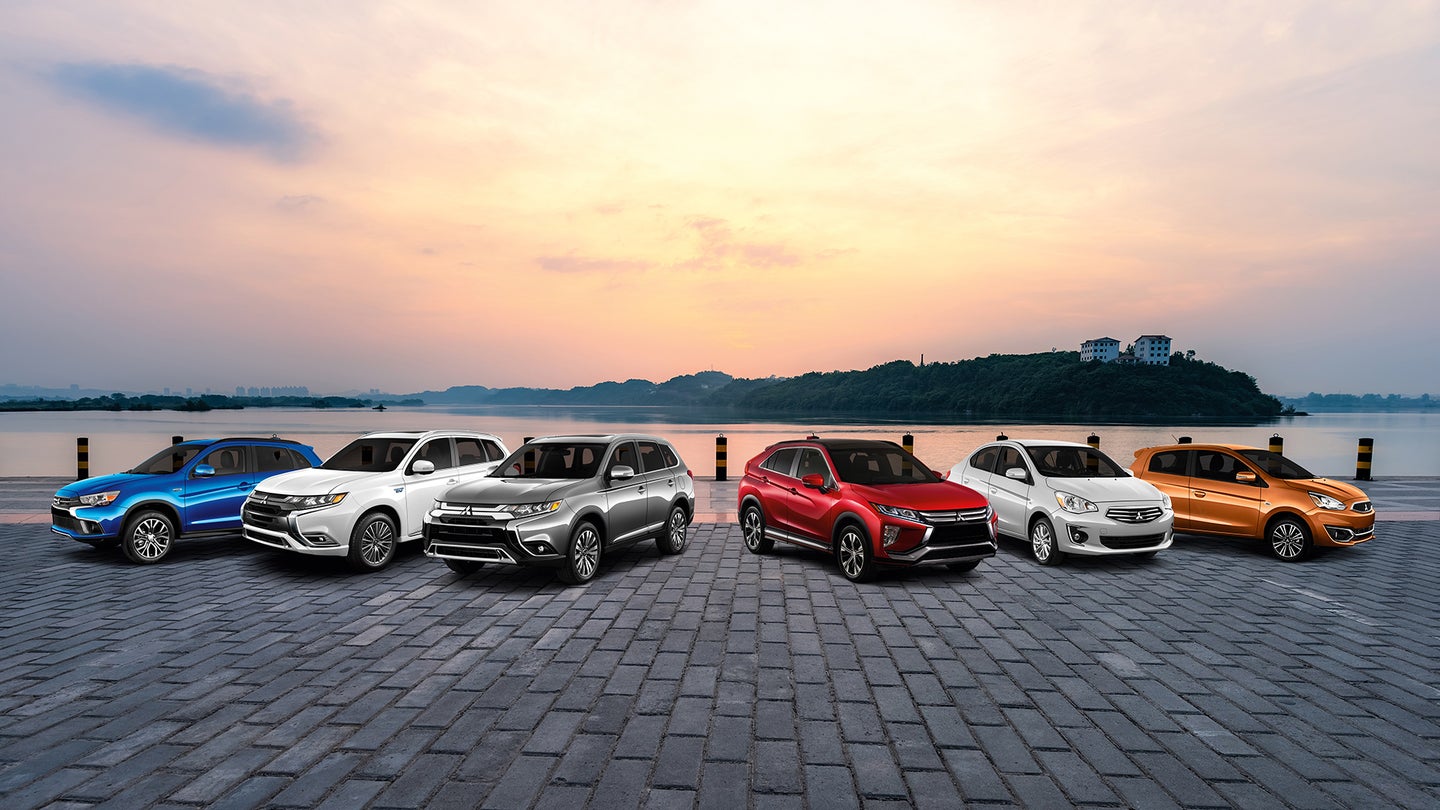 One hundred eighteen thousand and seventy-four.

That's how many brand-spanking-new passenger vehicles Mitsubishi moved off the lot in the United States in 2018: 118,074 brand-spanking-new cars and SUVs purchased by Americans between January 1st and December 31st. That's 13.9 percent jump over the previous year, and the company's best sales year in the U.S. since the pre-recession glory days of 2007, back when any carbon-based life form could score a sub-prime mortgage and Mitsubishi was still making cool TV commercials with earworm soundtracks.

That 118K and change figure, as it turns out, puts Mitsubishi in front of some much buzzier names in the American auto sales race. It's more than Land Rover's 92,143 new vehicles, in spite of that all-SUV brand's 23.3-percent sales jump over 2017. It's more than Lincoln's 103,587 cars and SUVs, or Volvo's 98,263 crossovers, sedans, and the occasional station wagon. It's far more than flashy new Genesis, which moved a mere 10,312 new vehicles last year in the States. And it's nearly twice as many as Fiat, Smart, and Mini sold combined—the three makers totaling 60,481 sales in America in 2018.

Sure, its easy to argue why each of those brands might not have seen more cars fly out the door: high price points, out-of-touch product portfolios, etc. But the fact remains, Mitsubishi—a brand with effectively zero notable vehicles, a carmaker which could hardly be considered pushing the envelope in any meaningful way, an automobile manufacturer which many car enthusiasts wrote off years ago and, based on Google's search suggestions, many Americans don't realize even still operates here—managed to sell more cars than any of them.

At first glance, from a product spectrum standpoint, the company certainly seems far less well-suited to meet the demands of a diverse buyer pool than it did in '07. Back then, the company offered a wide range of vehicles—sporty coupes and convertibles like the Eclipse, two sizes of sedans (the Lancer and Galant),a pair of crossovers in the forms of the Outlander and Endeavor, a pickup truck called the Raider, and a halo car in the form of the Lancer Evolution. (It was the Evo IX back in those days, in case you'd forgotten.) Today, on the other hand, the company sells a trio of crossovers—the Outlander, Outlander Sport, and Eclipse Cross, which is about as closely related to the sporty two-door that previously wore that name as it is an actual eclipse—and two forms of the Mirage subcompact, a five-year-old car most notable for having a three-cylinder engine with 78 horsepower and 74 pound-feet of torque. (No, those stats aren't missing a "1" at the front of each number.)

But therein lies the company's success: Mitsubishi was smart enough, lucky enough, or both to go all-in on SUVs just when the nation was about to develop an unquenchable thirst for them.

"This isn’t something we take lightly," MMNA president and CEO Fred Diaz told The Drive in regards to the company's fast-rising sales. "And we attribute it to having the right products at the right time. Our product planning team saw the CUV trend coming and committed the brand to having a competitive lineup of vehicles positioned for growing demand in the crossover utility vehicle segment."

It may seem obvious to us today, but keep in mind how many other carmakers didn't think to make the same move. General Motors spent hundreds of millions of dollars developing the Omega platform for the full-size Cadillac CT6, kicking the can down the road on a large crossover for the luxury brand until 2019. (And even then, some might argue the company phoned it in with the XT6.) Ford rolled out the Continental for Lincoln before the new Navigator or Aviator. And the aforementioned Genesis spent billions on the G90 and G70, with an SUV still a year or two out of sight as of this writing. It's no coincidence that two of those three brands are on the list of ones Mitsubishi whupped last year.

Not only is Mitsubishi big on crossovers, it's big on keeping them affordable. Every single vehicle the company sells in the States starts below the average new car transaction price, which, according to Kelley Blue Book, sat at $37,577 as of December 2018; in fact, with the exception of the surprisingly futuristic Outlander PHEV, every Mitsubishi sold in America has a base price below $30,000. The company, it seems, has found quite the niche selling inexpensive crossovers to folks looking for ride height at the right price.

Case in point: The carmaker's best seller in the U.S. last year was the Outlander Sport, 39,153 copies of which moved out of showrooms and into American garages. We had an Outlander Sport from Mitsubishi's press fleet in The Drive's office for a week last year; I drove it home one night, but only after a 10-minute delay caused by accidentally walking past it in the parking lot. (Twice.) It's not that I wasn't looking for it; it's just that forgettable. Same goes for the interior and driving experience—it'll move you from A to B, but lacks pretty much any character, individuality, or other distinguishing trait. I started calling it the Ann Veal of cars, and I stand by that judgement; never have I ever seen a brand-new vehicle so easy to overlook. Yet clearly, nearly 40,000 American households disagreed, apparently wooed by the combination of bountiful features, 8.5 inches of ground clearance, and an out-the-door price tag that starts at $21,990 and can only breach $30K by going to town on the accessories list.

The larger Outlander, which entered production in 2012, sold 37,652 units last year. (More proof of Mitsubishi's price play: That $35K-plus Outlander PHEV—which packs a hybrid system that mostly uses its gasoline engine as a generator to juice its twin electric motors after it burns though its battery power, and is, in fact, basically the only plug-in crossover you can buy at a sub-premium price—sold just 4,199 copies all last year.) Even the sacrilegious Eclipse Cross that went on sale in February managed to sell 9,485 versions.

And, in a turn of events no doubt sure to fill those who still value the virtues of sedans and hatchbacks with mixed emotions, the 78-hp Mirage twins managed to avoid the tradition car sales doldrums affecting virtually every other crevasse of the industry. 24,316 copies of those anemic subcompacts went out the door last year, a rise of 8.6 percent—no doubt to many drawn in by the allure of new car smell, Apple CarPlay, a 10-year/100,000-mile powertrain warranty, and 43 mpg highway, all for less than $18K spread out over four years at 0.0 percent APR.

Mitsubishi, of course, is far more than the spare assortment of crossovers and econoboxes it sells here in the U.S. Mitsubishi Motors had $13.66 billion in assets as of 2017, and the company makes numerous models not sold in America, such as the Pajero SUV, the Triton pickup, the Xpander minivan, and the eK microcar. Through its ties to Nissan, it's part of one of the largest automotive conglomerates ever to exist, one that sells roughly one in every nine new vehicles on the planet; through its connection to the greater Mitsubishi Group, it's connected to a series of Japanese-based companies that cover industries from food to shipbuilding to telecommunications to financial services. It is, by almost any reasonable measurement, a behemoth. Yet here in the U.S.A., the company remains largely constrained to also-ran status in the public eye, even while skipping past better-known names in the sales race.

To hear Mitsubishi tell the tale, that may be about to change. The company says it's planning on continuing to focus on crossovers and electrified vehicles; that seems likely to include vehicles that cover both of those fields at once, as Automotive News says Mitsu has hinted that new PHEV and full EV sport-cutes are in the cards as part of Renault-Nissan-Mitsubishi's plan to roll out more than a dozen new plug-in vehicles between now and 2022. It's in the midst of a reinvestment and expansion of its dealer network, and has also thrown some of its long-neglected advertising power behind sporting events like the Las Vegas Bowl college football game. (Sadly, this year's Arizona State–Fresno State battle drew just 3.33 million viewers, but hey, that's gotta include at least a few people who won't have to Google "Does Mitsubishi make cars anymore?" again.)

So who knows what the future might bring? By betting on both SUVs and EVs simultaneously—and being one of the few carmakers to do so with such devotion—it would seem primed for continued success in both short- and long-term. Granted, the current crop of Mitsubishi vehicle may lack many of the traits we enthusiasts treasure—but as the push for autonomous vehicles has made clearer than ever, there are millions of Americans for whom a car is less a source of joy or a statement of identity than a rolling Kenmore, an appliance needed to accomplish a basic task reliably and affordably.

And hey, Mitsubishi: Maybe it's heresy to say, but I bet a lot of us car nerds would forgive you for the whole "Eclipse Cross" name if you built an PHEV performance version with 400 electric-motor-spun horses and sold it for $45K.

Mitsubishi adapted to the crossover craze and it seems to be paying off.

The piano-violin duet of I Wanna Rock by Twisted Sister in this commercial is…confusing.