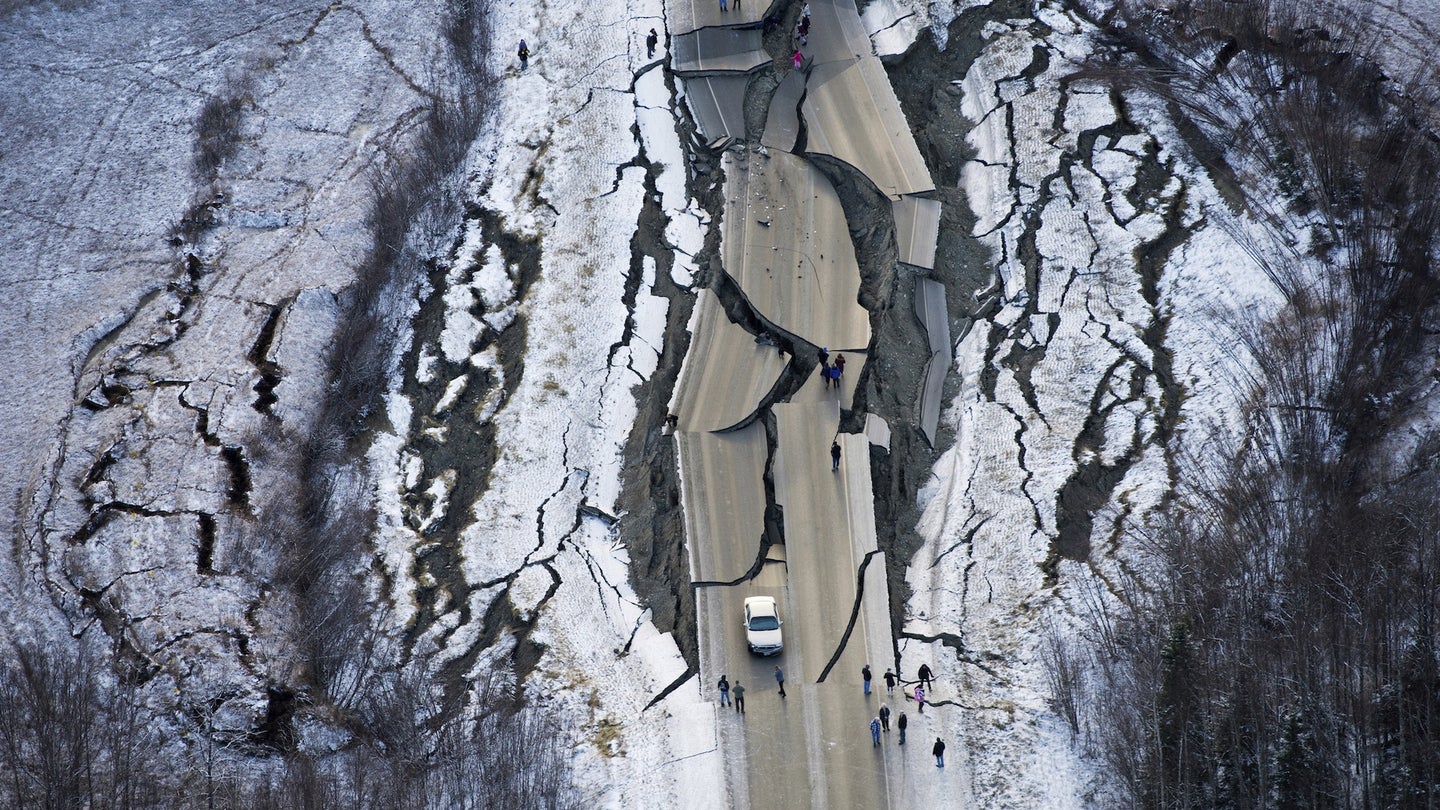 Roads destroyed by a 7.0-magnitude earthquake that struck near Anchorage, Alaska last week are impeding search and rescue efforts in the area. The aftermath has left buildings, residents and their vehicles stranded and sunken as they await support, CNN reports.

The quake hit approximately 10 miles northeast of Anchorage at around 8.30am AKST, with the U.S. Geological Survey recording its depth at 21 miles. Though the subsequent tsunami warning was canceled shortly after, there were dozens of aftershocks in the area.

“It was very loud when it came,” said Anchorage Mayor Ethan Berkowitz. “It was very clear that this was something bigger than what we normally experience. We live in earthquake country…but this was a big one.”

The image above is a strong indication of just how powerful and destructive the earthquake actually was, as the entire roadway is ripped open and the lucky driver just happened to be positioned on a small patch of unaffected asphalt. Unfortunately, the situation depicted above wasn’t an isolated incident, with roads splitting open beneath countless other drivers, and people from all walks of life and professions across Anchorage seeking safety throughout the disaster.

“It was absolutely terrifying,” Palmer resident Kristin Dossett told CNN. “It shook like I have never felt anything shake before. It just didn’t stoop. It kept going and got louder and louder, and things just fell everywhere—everything off my dressers, off my bookcases, my kitchen cupboard. Just broken glass everywhere.”

Fortunately, Anchorage authorities reported no deaths or serious injuries as a result of the quake on Friday night, with the Alyeska Pipeline Service Co. confirming that no serious pipeline leaks were reported, either.

In terms of the financial hit that this quake has initiated, authorities have yet to publish official figures. The region’s Municipal Light & Power utility, however, reported that between 7,000 and 10,000 of its customers had lost power. Drones and helicopters have been aerially assessing the damage from above, while the Anchorage School District canceled classes on Friday, Monday, and Tuesday.

Alaska state seismologist Michael West told CNN that the quake was felt up to 400 miles outside of Anchorage, and that Friday’s tectonic shifts were the biggest the city has seen since 1964. “I think it’s safe to say that, not measured in magnitude or location but in terms of how strong the ground itself shook during the earthquake,” he said.

President Trump urged everyone involved, via Twitter, to follow the advice and directions of local authorities, and that the federal government would spend all the necessary resources to aid in Anchorage’s recovery. He then approved a federal disaster emergency declaration for the state of Alaska, which allows the Department of Homeland Security and Federal Emergency Management Agency (FEMA) to coordinate the requisite efforts to do so.