Three days to fix a completely shattered road. Where’s that speed in the Lower 48? 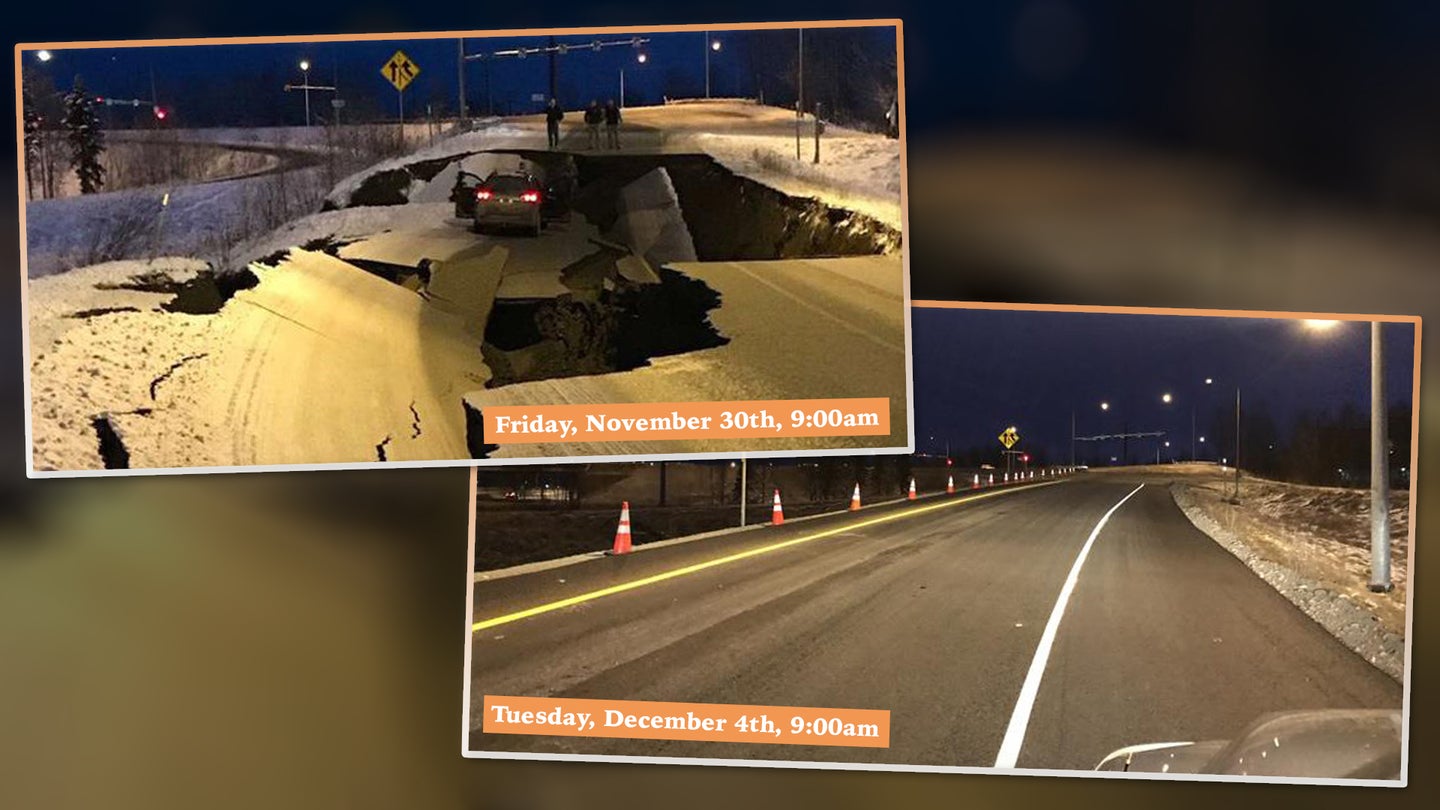 For those who are used to the glacial speed of normal road repairs—in Los Angeles, for example, there are potholes that voted for Reagan as governor—the sight of Alaska's trashed and tilted highways and byways following last Friday's 7.0-magnitude earthquake were downright terrifying. How long until those cratered roads return to normal? Decades? Eons, maybe? Nope, try three days.

This damaged off-ramp became an instant symbol of the quake's power, its pavement wrenched into a jumbled, chaotic mess with an incredibly unlucky GMC Terrain SUV trapped in the middle (the driver managed to walk away). Photos of the roadway, located near Ted Stevens Anchorage International Airport on the city's western edge, quickly spread around social media over the weekend as people marveled at the striking reminder of Nature's indifference to our existence, similar to most municipal road crews.

But while we in the Lower 48 were busy taking bets on how many years Alaskans would be detouring around the jagged hole, a combination of contractors and workers with the state's Department of Transportation and Public Facilities leapt into action. A 14-man crew was on scene just hours after the initial earthquake. Contractors were called in to restart dormant asphalt plants—shuttered for the winter—and heat the necessary material. One marathon 72-hour push later, and the off-ramp was back online.

Three. Days. It's not the first time we've seen road crews reassemble a fakakta roadway in record time after an earthquake; in particular, Japan is quite good at it. But witnessing this kind of speedy work in the United States is like seeing an eclipse. You know it's possible, you know it happens elsewhere, but it's a rare thing to experience firsthand. Facebook users reacted with appropriate shock after the Alaska Tour & Travel page shared an impressive set of before-and-after photos this week.

"It would take California years to get this done," one commenter sighed. He's underestimating there. "If that was Minnesota it be done in 2024," another posited. "This would take New York State six months of feasibility studies, several greased paws and two years to accomplish," a knowledgeable New Yorker chimed in. "Meanwhile in Texas, construction on I-35 has been on going since the fall of the Alamo," a frustrated Texan added.

A spokeswoman for the department told USA Today that the hardest part was removing all the damaged pavement and leveling the frozen ground. Alaska typically performs the vast bulk of its road maintenance in the summer months, as paving and grading is far more difficult in the cold. The work performed over the weekend is enough to last the long winter, but it will need to be at least partly re-done when the weather warms.

The spokeswoman added that such extensive repairs usually take over a month to complete properly—something backed up by more than a few Alaskans who chimed in on the viral post to wish for this kind of speed in the warm months for non-emergency scenarios. "Let’s be real, if it were summer, this would have taken two months to fix. Let’s see this hustle next year," one skeptic wrote.

Still: all this in three days. And while the off-ramp was one of the first on the infrastructure fix-it list thanks to its prime location near the airport, it's far from the only road Alaskan crews completely reconstructed out of a pile of rocks this week. Of course, even the ones they haven't fixed yet are still seeing Jeep traffic. Can't stop Alaska either way.