Topline: Despite the gradual decline in sales of sedans in the United States, Toyota is trying to inject some much-needed life into the segment with the all-new Corolla sedan.

What's New: The 12th-generation Corolla sedan is all-new for 2020 and is based on the Toyota New Global Architecture (TNGA) like its recently released hatchback counterpart, the Camry, and the Avalon.

Compared to its predecessor, the new Corolla sedan is lower and wider but retains the 106.3-inch wheelbase. Up front, the track has widened by 0.47-inch while the rear has increased by 0.87-inch, giving the new Corolla a more dynamic stance. The front overhang was shortened by 1.3-inches whiles the rear overhang was extended by more than half an inch. The new Corolla rides 0.8-inch lower than its predecessor and the hood has been lowered by 1.4-inches to improve forward visibility. By mounting the engine lower than before, Toyota engineers were able to reduce the Corolla sedan's center of gravity by 0.39-inch, thus improving the vehicle's fuel efficiency and enhancing its handling capabilities.

Up front, like the Corolla hatchback, the sedan also receives a more aggressive front fascia. The Corolla SE and XSE wear the sportiest face, which includes a body-color chin spoiler and aero stabilizing fins, which emphasize the car's wide stance. The Corolla sedan also features the slim, J-shaped Bi-Beam LED headlights found on the Corolla hatchback. The sporty SE and XSE trim get triple-J shaped clearance lamps with LED light guides and LED turn signals. Adaptive Front-lighting System (AFS) is optional on higher trim levels of the Corolla sedan and provides a wider field of light and steers the low beams in the direction of the turn, based on the vehicle's speed and steering angle.

All 2020 Corolla sedans come standard with LED taillights, but the type and style vary depending on the chosen trim level. The SE and XSE variants get smoked outer light lenses.

For the first time in the Corolla's history, the SE and XSE trim come standard with 18-inch alloy wheels. These multi-spoke alloys get a complex machining technique paired with deep surfacing and dark accents. The L and LE variants ride on 16-inch steel wheels with covers while the XLE trim rides on 16-inch alloy wheels with three-dimensional twisted spokes.

Like the exterior, the interior of the new Corolla sedan has been completely redesigned to provide a more simple. warm, sensuous, and inviting atmosphere.

Throughout the cabin, high-gloss materials are paired with matte trim pieces while silver accents with piano black trim are also available with contrasting stitching. The front tray is large enough to hold small objects like a wallet or a smartphone or when equipped, it houses the optional Qi wireless charging pad.

In the instrument cluster, between the tachometer and speedometer, the Corolla comes standard with 4.2-inch TFT multi-information display or an optional 7-inch screen. When equipped with the 7-inch TFT screen, the driver can switch between analog and digital speedometer styles.

In the 2020 Corolla sedan, the driver sits 0.98-inch lower and 1.57-inch further rearward, resulting in an improved driving position. The front seats on the Corolla SE and XSE debut a new design featuring a unique shape with the headrests nestling into the shoulder area. The seats in the Corolla LE and XLE offer a seatback with a new U-shaped pattern rather than the conventional square seatback design, which results in a more youthful, sporty appeal while improving the occupant's comfort. The front seats in the Corolla SE and XSE offer thin, yet wide shoulder supports which overlap solid and thick side bolsters, which keeps the occupants snug in their seats.

Depending on the trim level, the 2020 Toyota Corolla sedan is available with three multi-media choices.

The Corolla LE and SE get Entune 3.0 Audio with an 8-inch touchscreen and 2 USB ports.

What You Need To Know: When the 2020 Toyota Corolla sedan goes on sale, it will be available with two engine and transmission choices.

The 2020 Corolla L, LE, and XLE sedans are powered by the same 1.8-liter four-cylinder engine found in the current model, but Toyota engineers have been able to squeeze more power from the engine while improving its fuel efficiency. The Corolla SE and XSE sedans are powered by an all-new 2.0-liter Dynamic-Force direct-injection four-cylinder engine. The new engine produces 169 horsepower at 6,600 rpm and 151 pound-feet of torque at 4,800 rpm.

The standard transmission in the new Corolla is a new Dynamic-Shift CVT which includes a physical first gear, which helps the Corolla get off the line before the CVT's pully system takes over. The CVT also features 10 simulated forward gears. The optional transmission is an all-new 6-speed intelligent manual transmission which features downshift rev-matching control, which automatically detects when the driver is downshifting and quickly rev-matches to the lower gear.

To aide the Corolla sedan's handling, Toyota engineers have replaced the torsion-beam rear suspension from the current model with a new multi-link independent suspension. The MacPherson strut front suspension has also been redesigned for the TNGA platform and provides smoother upward suspension travel, resulting in a more comfortable steering feel.

The 2020 Toyota Corolla sedan will be available at dealerships in Spring 2019. Prior to arriving at the showrooms, the Corolla sedan will debut at the 2018 LA Auto Show later this month. Pricing for the Corolla sedan range will be announced closer to its launch date, but we assume that it will have a slightly lower starting price across the range when compared to its hatchback counterpart. 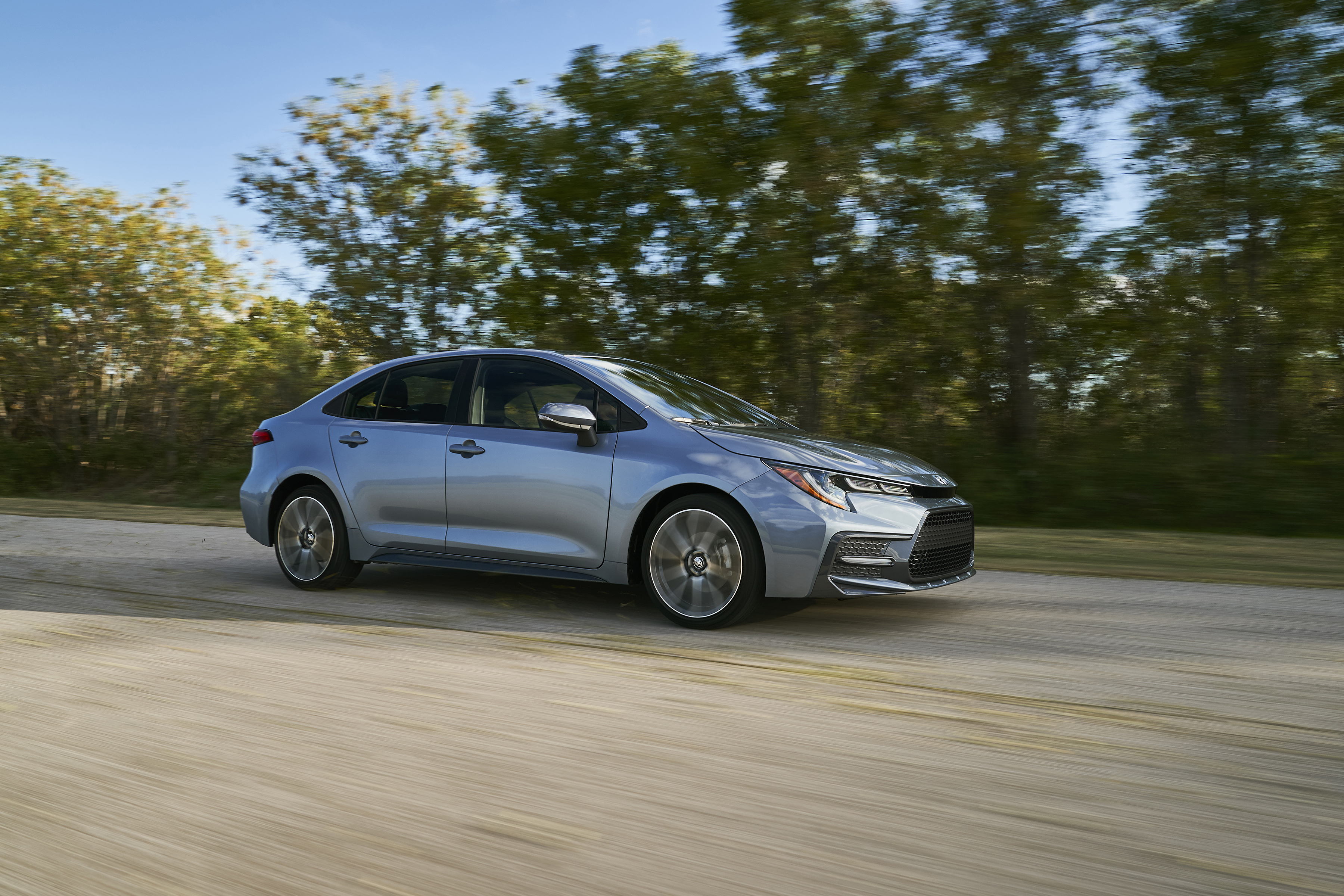 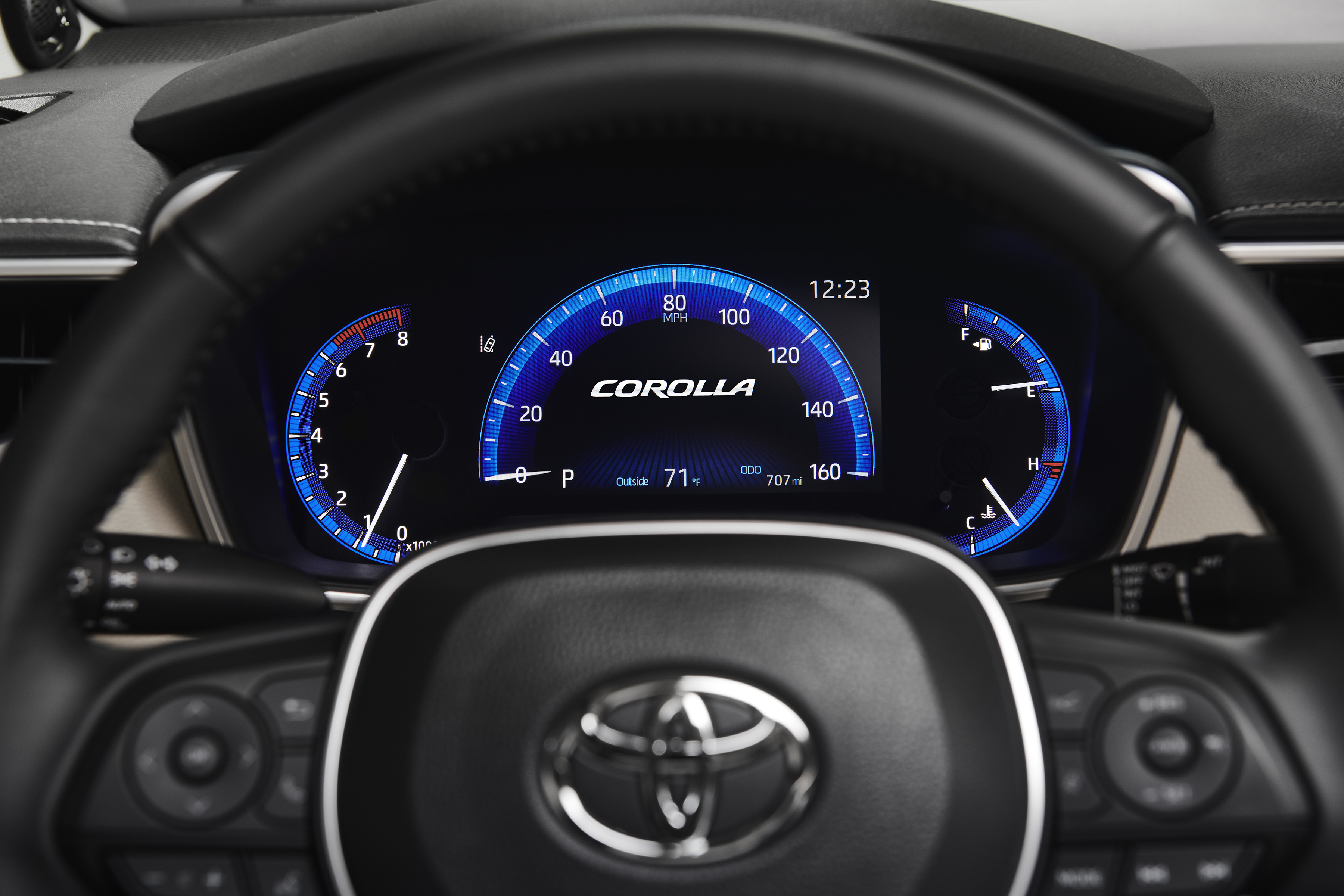 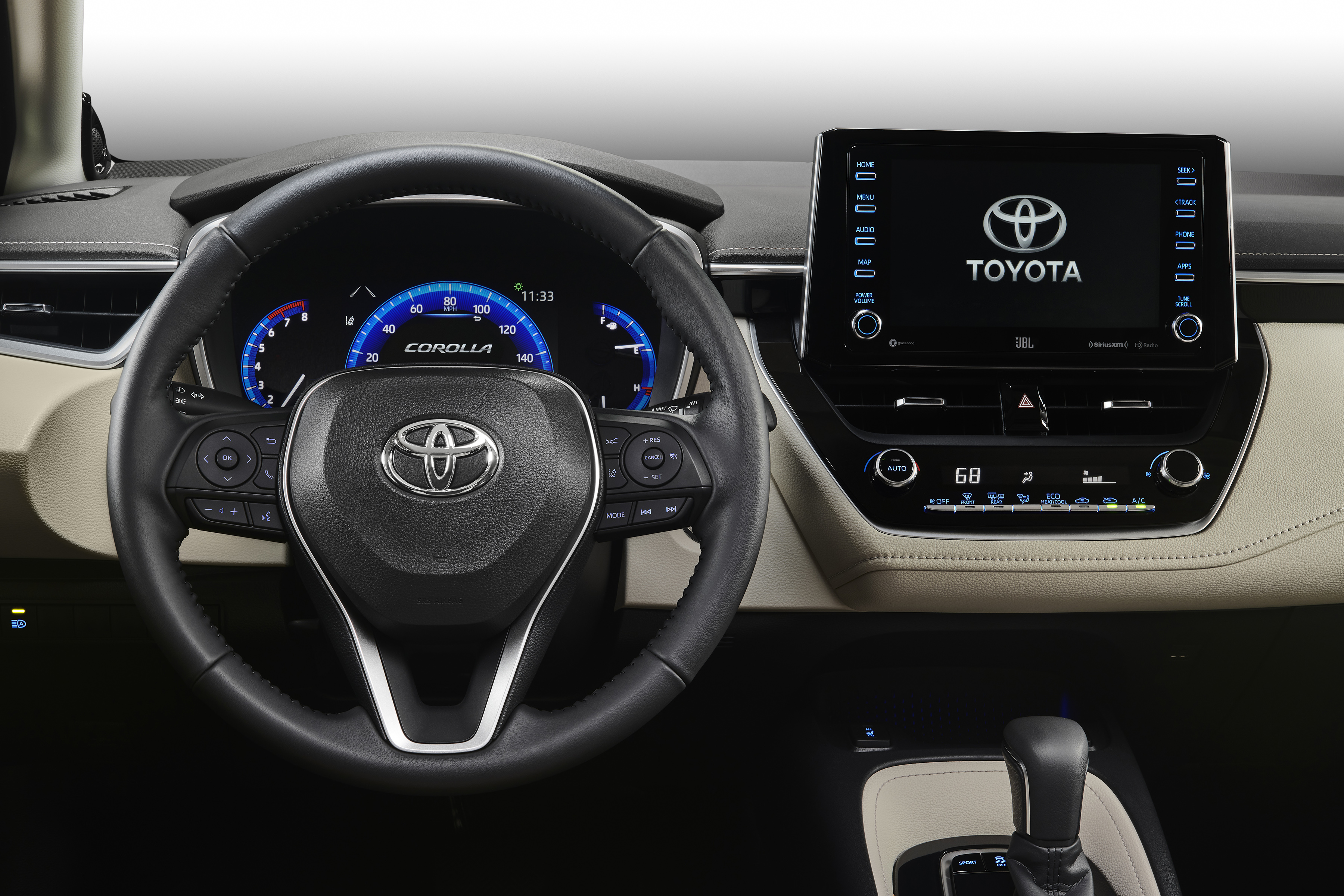 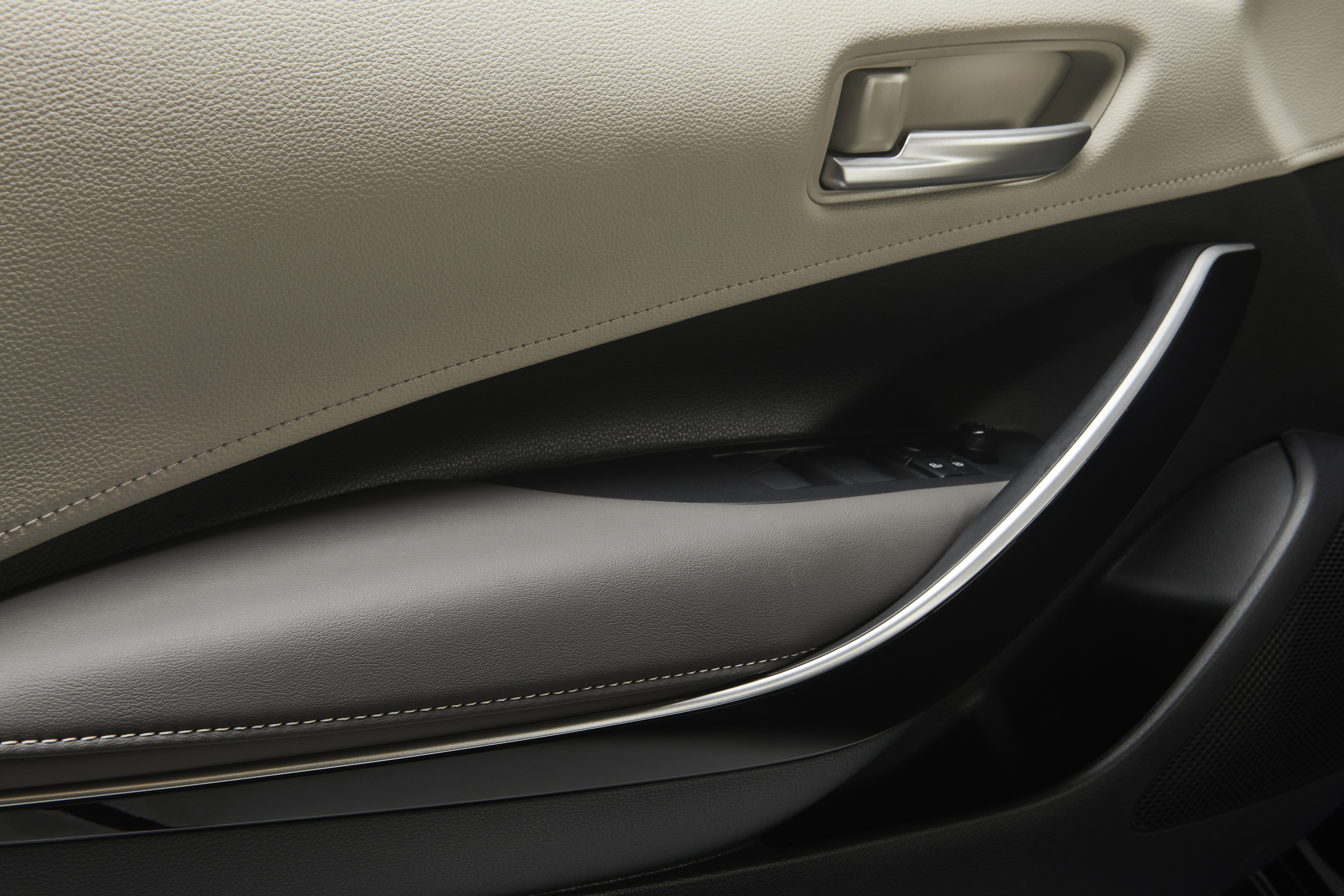 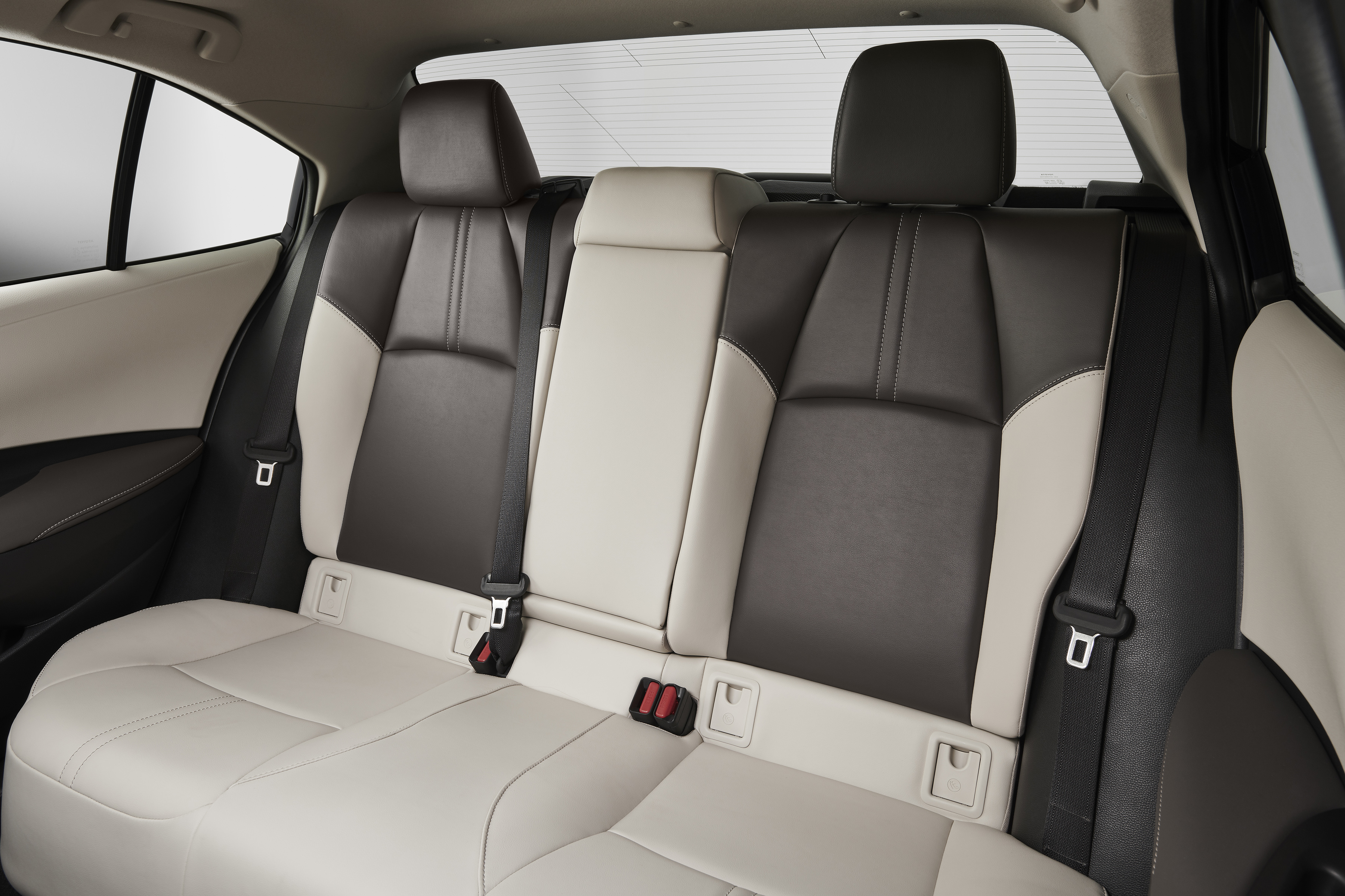