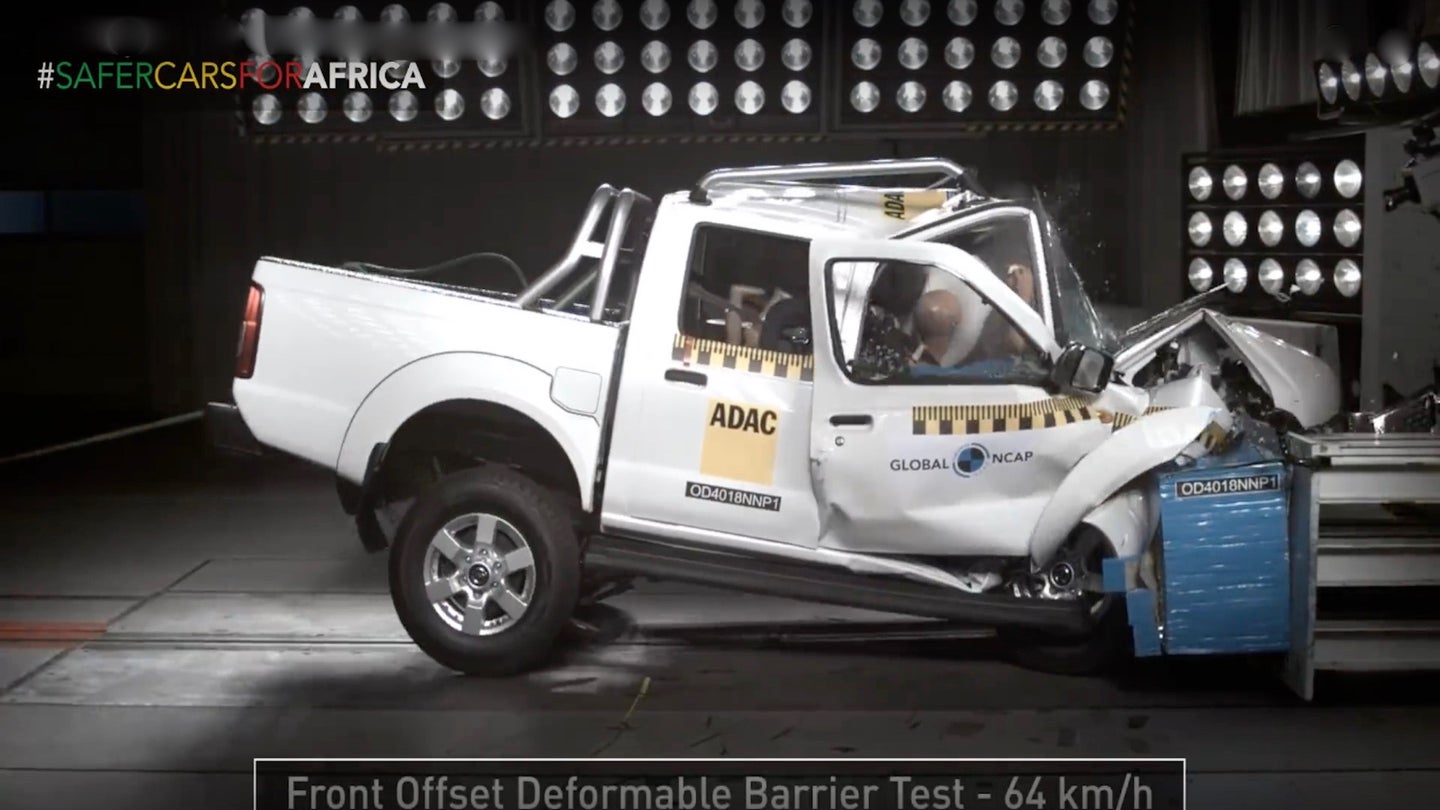 In a recent safety evaluation of the Nissan NP300 Hardbody performed by the Global New Car Assesment Program (NCAP), it was found that the brand's midsize pickup truck that's sold in various markets around the globe is woefully unsafe. How unsafe? It earned a zero-star crash safety rating. Zero.

The Global NCAP tested a handful of vehicles including the Toyota Yaris, Hyundai i20, Kia Picanto, and the inappropriately named Nissan Hardbody. But while the Nissan's classmates earned a lukewarm three-star rating, the Nissan simply crashed and burned—quite literally. The NP300 Hardbody is, in a nutshell, a newer version of the 1997-generation Frontier that's been updated to look better but not necessarily perform better.

It’s not often that we feel bad for the test crash dummies, as they have a pretty important job to do, but this would definitely be one of those times. In watching the video, we can see the occupants being thrown around and crushed by the cab of the truck in nearly every crash scenario.

Report summary by the Global NCAP:

”The NP300 Hardbody achieved an alarming zero star rating for its poor adult occupant protection mainly in the driver head and chest areas in the frontal crash test at 64 km/h (40 mph)," Global NCAP noted. "The vehicle structure collapsed during the crash test, and it was rated as unstable. The steering wheel column did not collapse, penetrating the passengers’ compartment, creating an additional risk for the driver as it moved straight into the dummy chest. This performance showed a significant risk of injuries for the driver despite the car being equipped with double frontal airbags. The high probability of life-threatening injuries to the driver’s head and chest resulted in the zero-star adult occupant protection rating. Even with an airbag, the driver’s head and chest showed high biomechanical readings.”

“The safety of our customers is Nissan’s top priority," a Nissan spokesperson told The Drive via email. "All of our cars meet or exceed regulations in all countries in which they are sold."

"The Nissan NP300 is a tried and trusted partner for businesses and entrepreneurs, providing reliability and affordability," he added. "Continuous improvements are being made to the NP300 such as dual airbags and ABS brakes which are fitted as standard equipment. Nissan is studying further enhancements.”

Even though none of the vehicles tested are sold in the United States, this is an excellent reflection of the subpar level of engineering some emerging markets have to deal with.

Don’t put anything you cherish into a Punto.