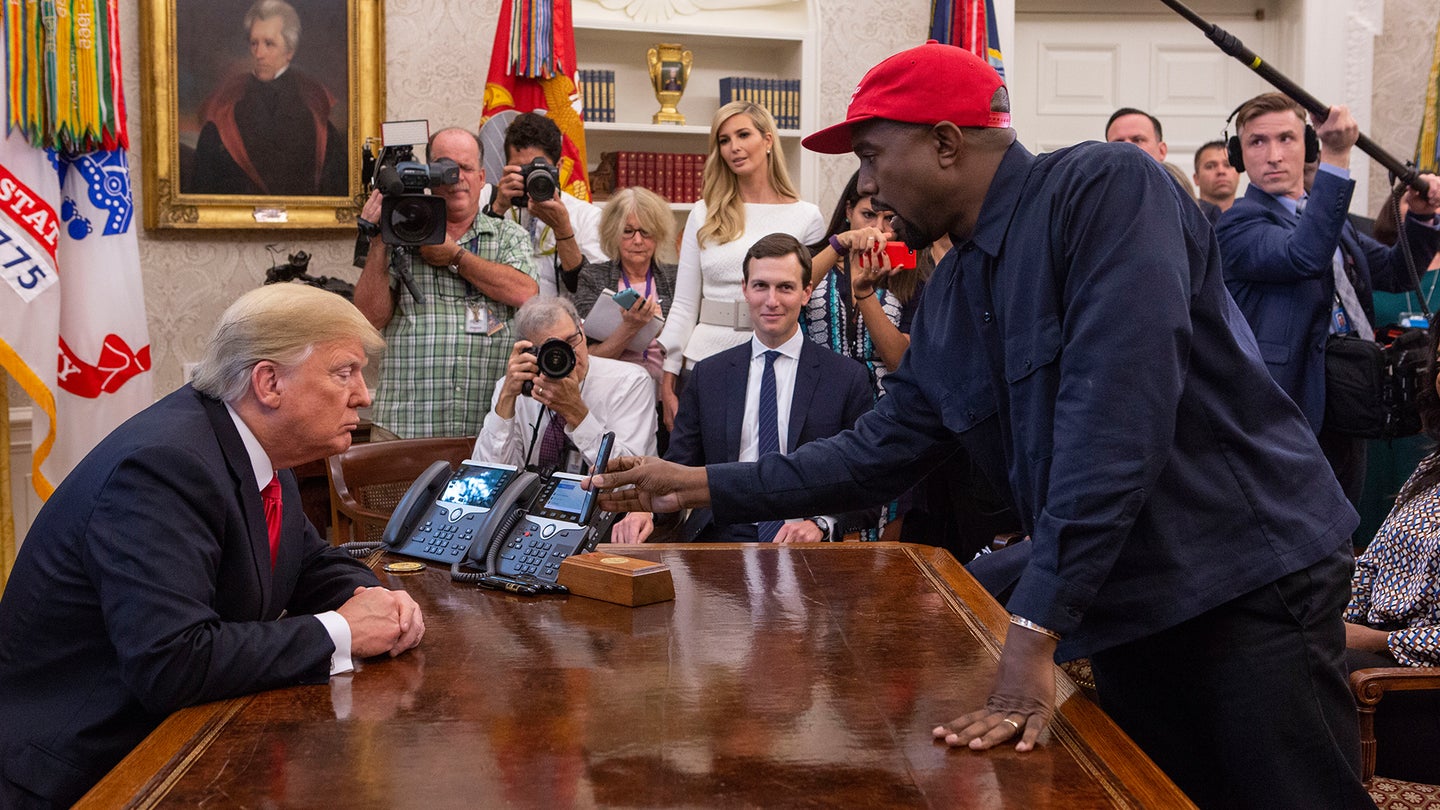 Kanye West, superstar rapper and self-proclaimed fan of U.S. President Donald Trump, visited the White House Thursday, where he let out a nine-minute tirade at the Oval Office about what he believes oppresses this country. However, he also took the time to pitch the President an idea to replace Air Force One with an airplane he claimed Apple was working on, called "iPlane One".

Making things even more bizarre, it's the fact that the plane isn't only fictional, but was identified by The Verge to have been plucked from a college student's thesis project in 2012. During the meeting, West enthusiastically talked about his love for American industry; encouraging the president to support domestic automakers, specifically naming Ford. Despite his praise, West's garage has been populated with over $6.3 million in foreign-produced exotic and luxury automobiles, including a Bugatti Veyron, Aston Martin DB9, several Lamborghinis, and a Russian-made Prombron Red Diamond.

West continued to condemn made-in-China products, unlocking his iPhone (with the password being all zeros) to show the president the newest American-made idea to replace his aging Air Force One.

"I brought a gift with me right here," said West, opening up a text message with at least five pictures of the design concept, "This right here is the iPlane 1. It's a hydrogen-powered airplane and this is what our president should be flying in. We're gonna have Apple, an American company, work on this plane."

Currently, the presidential fleet of airplanes is made up of two customized Boeing 747s known as VC-25As, which use the call-sign Air Force One when the President is aboard. Boeing, like Apple, is also an American company with its headquarters based in Kanye West's hometown of Chicago.

In actuality, West's presentation to the President was a design concept drawn up by a graduate student named Shabtai Hirshberg in 2012. The plane had never been in production, was not actively being produced, nor has Apple publicly announced itself to be a mobility company of any sorts, despite working on a vehicle-driven autonomy project.

"This is the accumulation of a one-year intensive work, it was my graduating thesis project for my master’s degree in the College for Creative Studies in Detroit,” said Shabtai Hirshberg, the original creator of the design, to The Verge.

Hirshberg goes on to mention that West provided no credit to him in the meeting, nor was the design actually hydrogen-fueled as West described to the President. He theorized that West found his images while Google searching, as they have been public on the internet since 2015. Humbled, Hirshberg also offers to collaborate on an actual project with West and Apple should it one day come to fruition. However, West visited Hirshberg's former school in Detroit last week, where he jumped on top of a table and screamed at students to "Leave Elon Musk the f*** alone!" So it's possible that he saw the designs there and not the internet, as claimed.