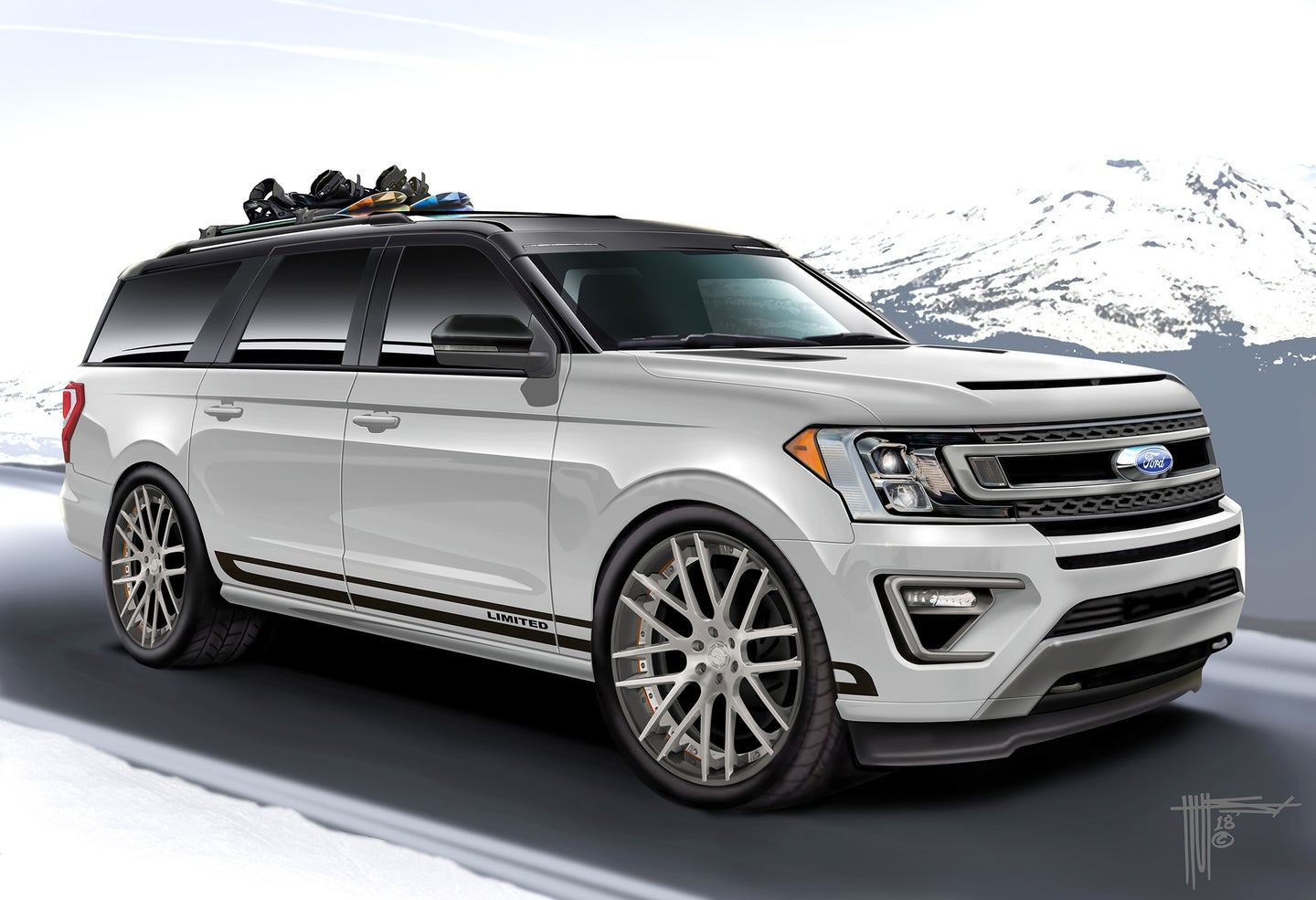 The 2018 SEMA Show, headed to Las Vegas Oct. 30, will see many independent shops and big manufacturers bringing in bespoke versions of production vehicles. Ford is no exception, and the company is cementing its recent shift toward SUVs and crossovers by dedicating much of its SEMA floorspace to those segments. Ford released details on a modified Edge ST, two Expeditions, an Explorer, and an Ecosport it will show off in Las Vegas. Each of these projects were created in conjunction with a separate custom vehicle, so they all have their own unique style.

The Edge ST, built by Chigaco-based shop Blood Type Racing, retains the production model's 2.7-liter twin-turbocharged V6 engine. An upgraded intake, intercooler and exhaust system, boosts the crossover's already-ample 335 horsepower, although Ford doesn't specify by how much. This version also rides on 22-inch wheels, low profile tires, and an as-low-as-you-can-go suspension. The Edge's look is completed by a custom ground effects kit on the outside, and a carbon fiber steering wheel on the inside.

The Expedition created by designer Theresa Contreras of LGE-CTS Motorsports has clearly been built with off-roading in mind. It's 3.5-liter V6 has been mostly left untouched, save for the addition of a Borla cat-back exhaust. The SUV's suspension gets some love, with a suspension leveling kit and upgraded swaybars. At all four corners, this Expedition gets 285 millimeter wide BFG Mud-Terrain tires wrapped around durable steel wheels. Accessories like a roof rack, lightbar, tow straps, and even a tent, complete the whole package.

Another Expedition, this time from Hulst Customs, prioritizes style over capability. It also gets a Borla exhaust, but that's where the similarities with the Expedition Classic end. Instead of practical steel wheels, this one has massive 26-inch forged pieces from Lexani, with 305-millimeter low profile tires to match. Up front, the Destination Expedition gets a custom grill and hood. A Yakima "Fat Cat" snowboard carrier occupies its roof space.

The MAD Industries Explorer combines more conservative styling touches with under-the-surface performance upgrades. MAD Industries has paired the standard 3.5-liter V6 with a JMS "plug and play" tuner. The shop also wanted to focus on handling prowess with this Explorer, so it got Eibach springs and Powerstop racing brakes all-around. The vehicle's bodywork features a two-tone red-on-black paint scheme, which continues through the interior with red stitching on black leather seats.

The compact crossover gets an aggressive makeover, with a new coilover shocks raising vehicle ride height, and 3D printed black-clad fender flares adding to the width. This EcoSport takes some rally inspiration, so Maxxis all-terrain tires have been mounted on its Fifteen52 "Turbomac" wheels. It also gets bespoke front and rear bumpers, complete with winches. Up top sits a combination of bike rack and light pod.

Ford's SEMA display for 2018 will be in line with its plan to cease production on anything that's not a crossover, SUV, pickup, or Mustang. While the company is drawing attention to its lineup of Escapes, Explorers, Edges etc. It also states that it will have "more than 50 vehicles on exhibit," many of them custom Mustangs. If SUVs aren't your cup of tea, then Ford may still bring something to the show that appeals to you.