The museum’s mechanic says that this 1992 Hobbycar’s most vital components are now filled with corrosive water. 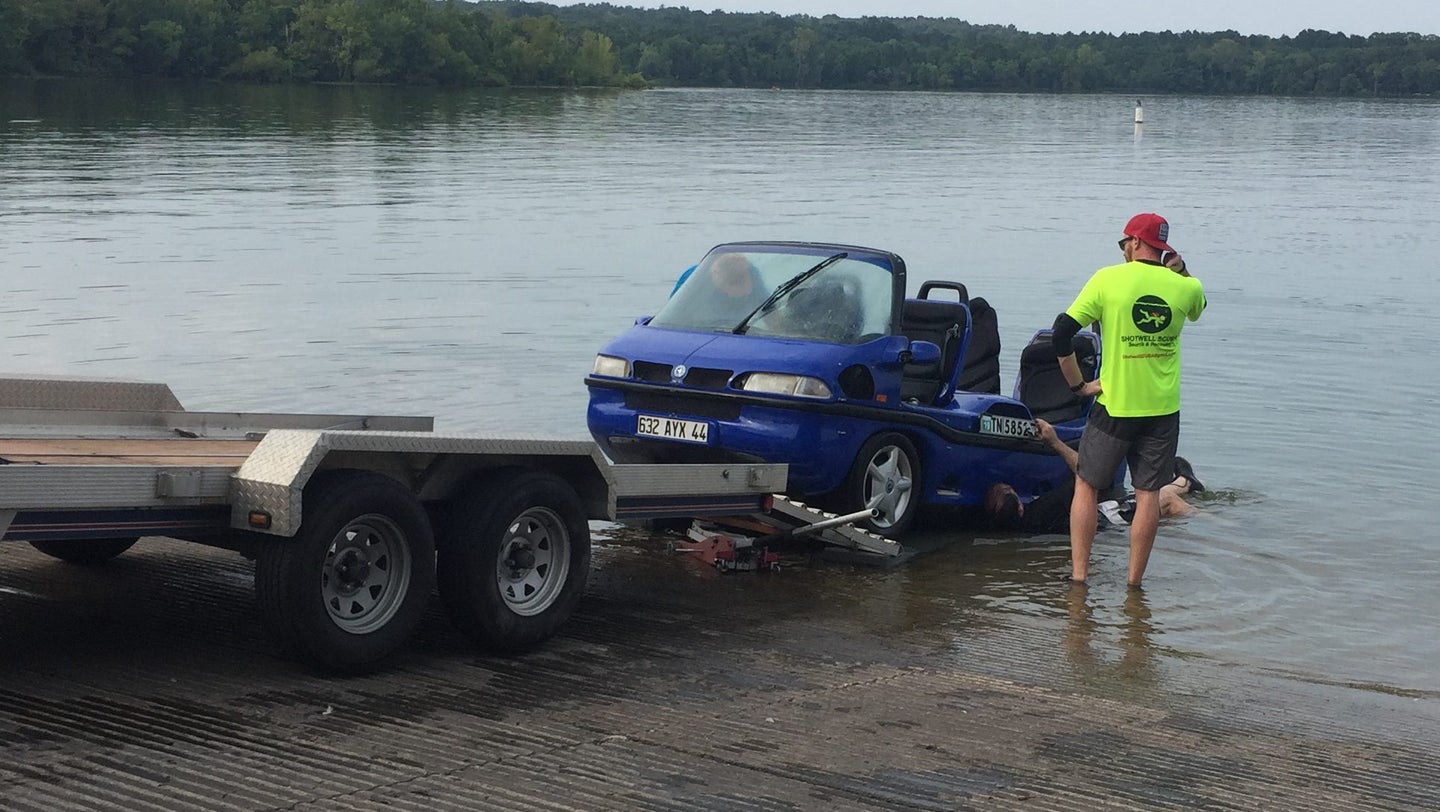 The Lane Motor Museum in Nashville is home to countless automotive oddities, including a 1992 Hobbycar B612. Only 52 examples of this car were made in a special factory in France. Its selling point was the capability to drive the car on land, and at sea. The Hobbycar utilizes a mid-mounted Peugeot four-cylinder engine that drives all four wheels on the road. In the water, the same engine propels two hydro jets, which are controlled by a joystick inside the vehicle.

On August 11, the Lane Museum published a statement on Twitter saying, "We're sad to say that our 1992 Hobbycar is now touring the bottom of Percy Priest Lake. This morning, during our annual amphibious car ride event for members, it began to take on water and sink. Most importantly, nobody was hurt. Our Amphicar was nearby and came to assist the riders while they awaited help. We are grateful for the assistance we received from a nearby boater in getting everyone back to shore safely. We will begin recovery efforts to pull the Hobbycar from the lake immediately and will update you on that progress as it unfolds."

Driving the car during the incident was head of the museum, Jeff Lane. After Lane and his passengers made it to dry land, he told local news agency WPLN that he had previously taken the car on many naval voyages and this was the first time it had an issue. According to Lane, the Hobbycar had ended up about 25 feet below the surface of Percy Priest Lake.

True to its word, the museum wasted little time in dredging up the sunken vehicle. On Tuesday, a scuba team was dispatched to locate the vehicle before pulling it up from the lake with a towboat, then a winch. The retrieval process can be seen in this video released by the Lane Museum.

The Hobbycar suffered little outward damage from its three-day dip, but within the vehicle's moving parts, it's a totally different story. To get an idea of the repair process, The Drive contacted Lane Museum mechanic Greg Coston over the phone. Coston elaborated that while the amphibious vehicle came up from the depths intact, restoring it to working order would be an arduous task.

The Hobbycar first went under due to what Coston thinks was a faulty bilge pump, which is a small electric pump tasked with pushing out any water that splashes into the vehicle. As the now overweight car sank, its engine sucked in a substantial amount of water before dying. As it sat on the lakebed, water also filled the car's gearbox, transfer case and differentials. Lane's mechanics cannot simply open these components, as exposure to air would cause them to corrode almost immediately. Coston explained that the plan was to first push out the water using other fluids like lubricants and diesel fuel. They can then crack the engine and other components open to assess the level of damage.

Greg Coston stated the restoration would take a few months at a minimum. No matter how difficult the project becomes, Jeff Lane made it clear in his interview with WPLN that he would spare no expense when it came to making the vehicle seaworthy once again

Special events, cheap admission, and historic bikes are all on tap.