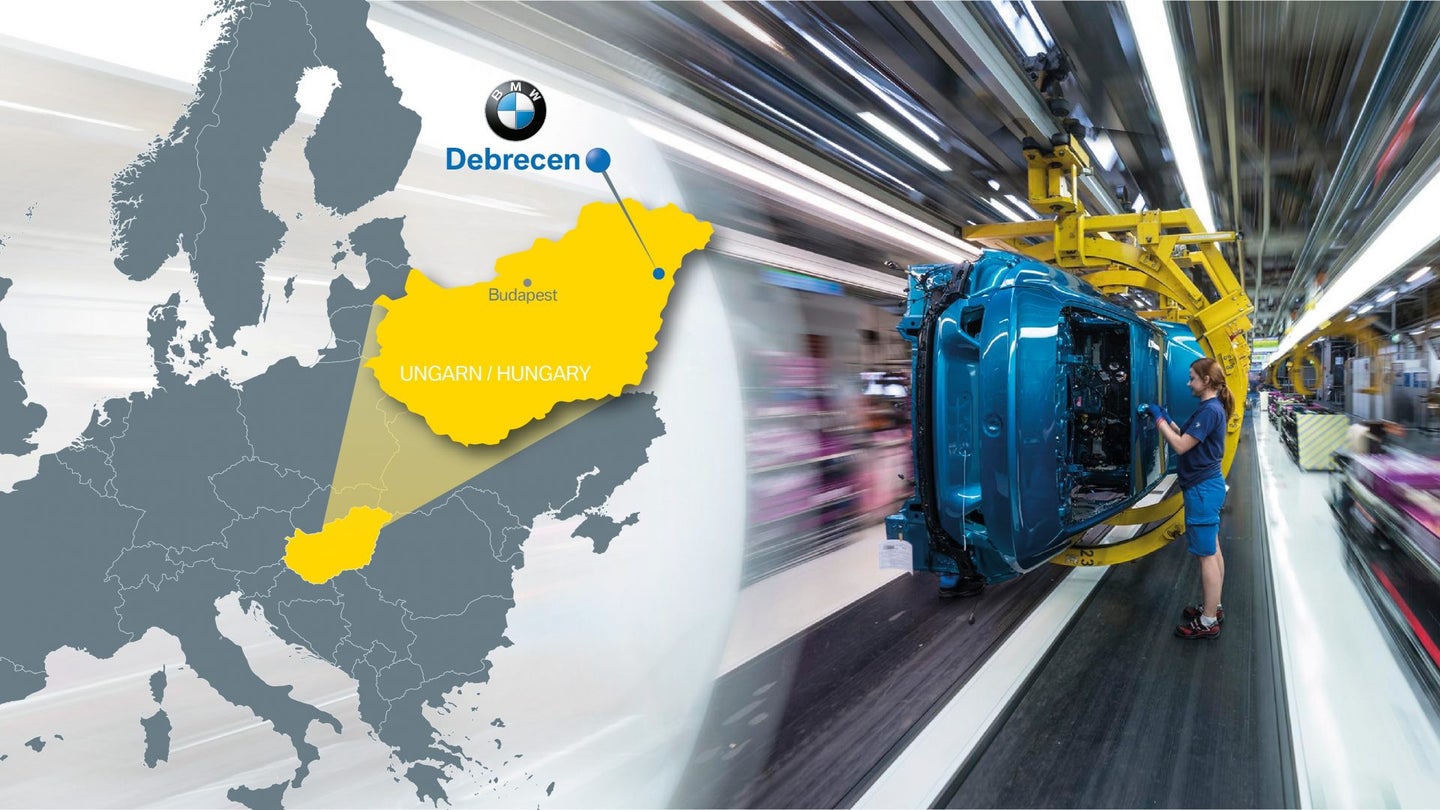 BMW announced Tuesday that it intends to build a manufacturing plant in Hungary, near the town of Debrecen, in which it will invest around €1 billion ($1.17 billion).

The facility is expected to have a production capacity of 150,000 vehicles per annum and will employ upwards of 1,000 locals. BMW cited the region's favorable infrastructure, qualified local labor force, and proximity to longstanding Hungarian suppliers (whose services were worth €1.4 billion to BMW in 2017) as reasons for the location's selection. Its increased demands from its local suppliers will add jobs to its suppliers as well.

"The BMW Group's decision to build this new plant reaffirms our perspective for global growth," stated Harald Krüger, chairman of the board of management, in the automaker's press release.

"After significant investments in China, Mexico, and the USA, we are now strengthening our activities in Europe to maintain a worldwide balance of production between Asia, America and our home continent. Europe is the BMW Group's largest production location. In 2018 alone we are investing more than €1 billion in our German sites to upgrade and prepare them for electric mobility."

"In the future, every BMW Group plant in Europe will be equipped to produce electrified as well as conventional vehicles," added Oliver Zipse, board member for production.

The new plant will be equipped to handle the manufacture of both internal combustion and electric vehicles but will bake flexibility into its design and manufacture both on a single production line, Zipse explained.

"It will bring greater capacity to our worldwide production network. When production commences, the plant will set new standards in flexibility, digitalisation, and productivity," he said.

The automaker has already declined to comment on Reuters's inquiry as to whether the United States' metal tariffs influenced its decision to build the Debrecen plant. These and similar tariffs have already encouraged BMW to move production of the X3 crossover from its Spartanburg, South Carolina plant to China, where it used to export American-built X3s, a practice now ended by the tariffs.

A BMW spokesperson confirmed to The Drive in an email that the Debrecen plant will not leach any of the Spartanburg plant's production, and that the plans to build its Hungary facility began long before the United States' trade policies became less favorable. The company declined to comment on which vehicles could be made in Hungary but confirmed that the new Z4—planned for production by Magna-Steyr in Austria—will not see its manufacture transferred to Debrecen.

"We will now finalize all contracts, then purchase the ground and prepare it," stated the automaker's spokesperson to The Drive. "The construction will start the second half of 2019 and will last some years. We don't mention a specific date."