2019 Chevrolet Blazer: This Is Not the Blazer We're Looking For

It's a Blazer in name only, slotting between the Equinox and Traverse in Chevy's crossover-SUV range. 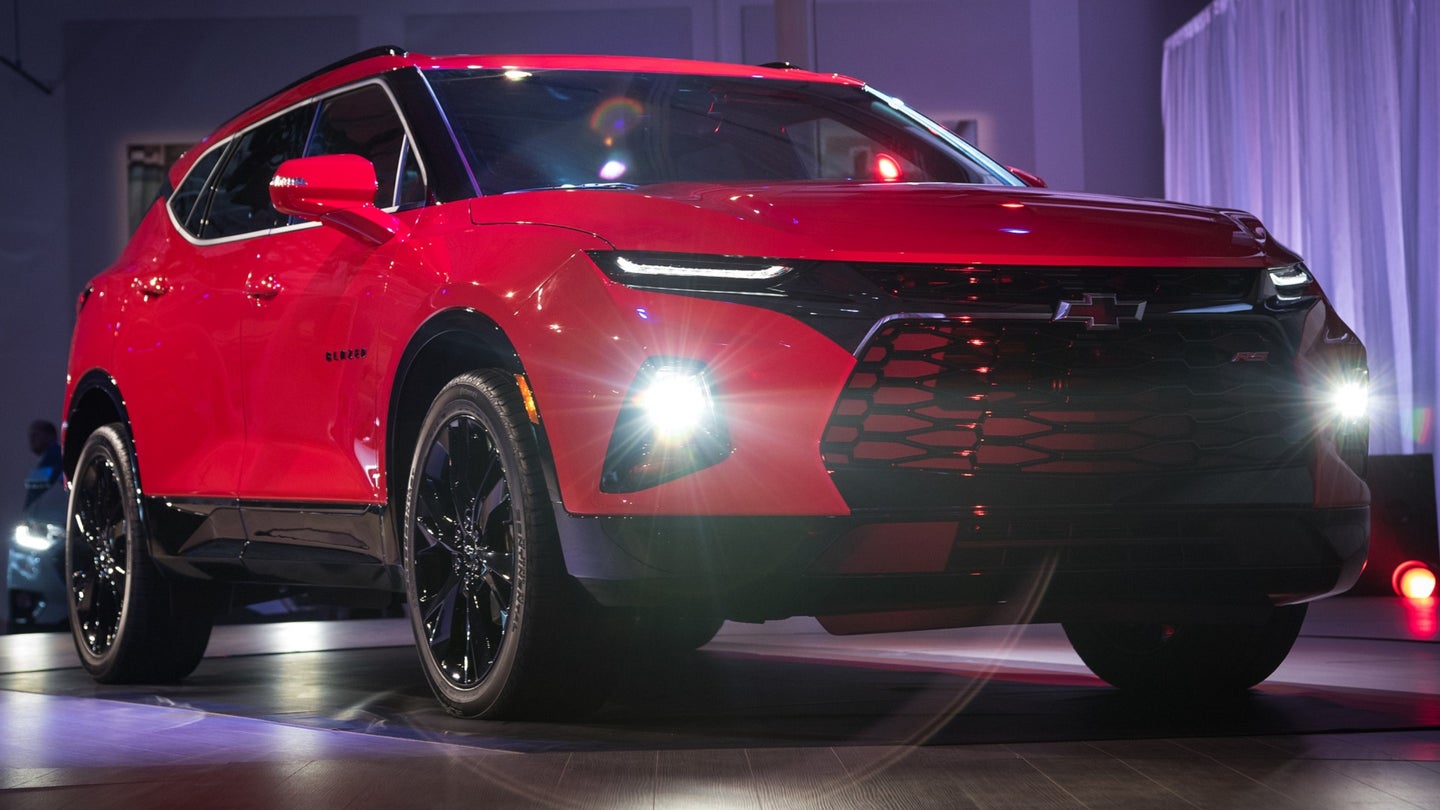 The Blazer is back—sort of. On Thursday, Chevrolet revealed the new 2019 Blazer to the world. Although the Blazer will likely be a capable vehicle and a profitable addition to Chevy's crossover lineup, it is a far cry from the Blazers of old that made the name famous.

Slotting between the Equinox and Traverse, the Blazer is a mid-size SUV with styling inspired by the Camaro. It is vastly different than the upcoming Ford Bronco, and should no longer be considered a competitor to it. While the Bronco capitalizes on its off-road heritage, the Blazer seems to ignore it, focusing instead on being an ordinary crossover for the masses.

Everything—this is an all-new vehicle. Unlike previous Blazers, this one is not based on a pickup truck platform. It will come with a standard 2.5-liter four-cylinder engine or optional 3.6-liter V6 engines, each backed by a nine-speed automatic transmission. An advanced twin-clutch all-wheel-drive system, not four-wheel-drive, will also be available.

Other features include an automatic heated steering wheel, automatic heated and ventilated front seats, comfort-open windows, and even an electronic locking glove box. These demonstrate that Chevy's priorities with the Blazer are street driving and comfort. The Blazer offers no provisions for any serious off-road capability, nor does it claim any.

"Chevrolet has been at the forefront of each of the major automotive industry trends by anticipating consumer demand and delivering innovative products like Bolt EV, Colorado, and Trax," said Alan Batey, president of GM North America and head of Global Chevrolet. "The introduction of the all-new Blazer builds on that momentum and further strengthens the most comprehensive lineup of crossovers and SUVs on the market today."

What You Need to Know

Chevrolet introduced the original K/5 Blazer in 1969 to compete with Ford's Bronco, introduced three years earlier. Both vehicles were rough and tough off-road beasts, true sport utility vehicles before SUVs were cool. The 1980s brought downsizing to both models, but with its S-10 pickup roots, it was still fully capable off-road until it was discontinued in 2005. Fast-forward to today, and the new Blazer is not a truck, but a crossover for modern times.

My experience with the Blazer comes from its GMC twin, the Jimmy. I spent a weekend with this particular Jimmy in 2013. (Don't let the Ford logo fool you—we put it there just to irritate the owner.) I co-drove this Jimmy as part of the Empire State Performance Rally sweep team, extracting rally cars that had crashed or broken down.

It was slow, loud, uncomfortable, and it drank gas faster than a frat boy guzzles beer. But when it came to extracting rally cars from ditches and guardrails, it excelled. I've never been much of a truck guy, but this experience taught me why the K/5 Blazer and Jimmy were so popular and continue to be today. It was built for a specific job, and it did that job extremely well. Even the military used full-size Blazers for many years.

This is why the new model is a let-down for Blazer fans. I think Chevrolet has missed a huge opportunity by making the Blazer just another generic crossover with aggressive styling. The Bronco will be one of Ford's upcoming authentic off-roaders, competing with the Jeep Wrangler and Toyota 4Runner for off-road supremacy. An off-road oriented Blazer would have been the perfect way for GM to compete as well, exactly like it did with the original K/5 Blazer.

But, like Mitsubishi has done with the Eclipse Cross, Chevy has wasted a name with a rich history and loyal following on yet another crossover-SUV. Sure, the styling may vaguely evoke the Camaro, but fans of the old K/5 and S-10 Blazers are unlikely to be interested in this new version. True, today's market buys road-oriented crossovers as fast as manufacturers can build them, but GM already has so many crossover models that there would have been room for a single model geared more toward off-road use. And "Blazer" would have been the perfect name for it.